Comments On Turning Points And Recessions 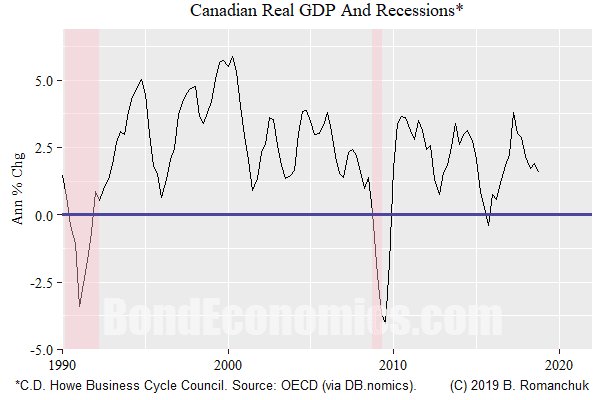 One of subtle issues with recession analysis is defining when they occur. For the United States, the National Bureau of Economic Research (NBER) has managed to become the authoritative source for recession dating, whereas for other countries, the dating process is less clear. In Canada, the C.D. Howe Institute has created a Business Cycle Council which has a mandate to date recessions: https://www.cdhowe.org/council/business-cycle-council. The chart above shows the post-1990 history of real GDP growth and the recession dates as defined by that committee. There are two declared recessionary periods: March 1990 - April 1992, and October 2008 - May 2009.

From a practical perspective, one might argue that the bar for declaring a recession is too high. 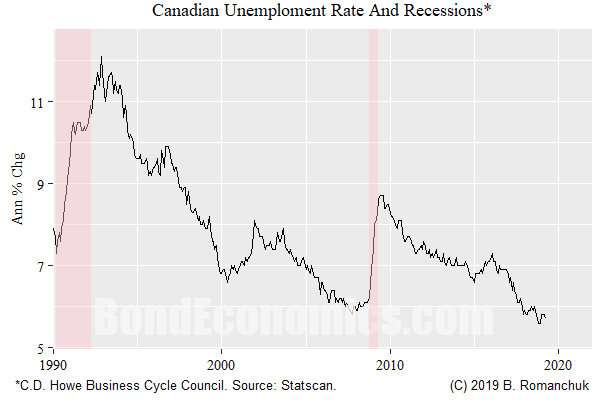 The figure above shows the Canadian unemployment rate and the C.D. Business Cycle Council's recession dates. (Note that this council was formed after the 2008 Financial Crisis, and so the earlier recession dates were based on applying a particular methodology to past data.) The unemployment rate by just over 1% in 2001, in a relatively rapid fashion. Although the downturn was somewhat localised, it certainly felt like a depression for anyone associated with the technology industry. 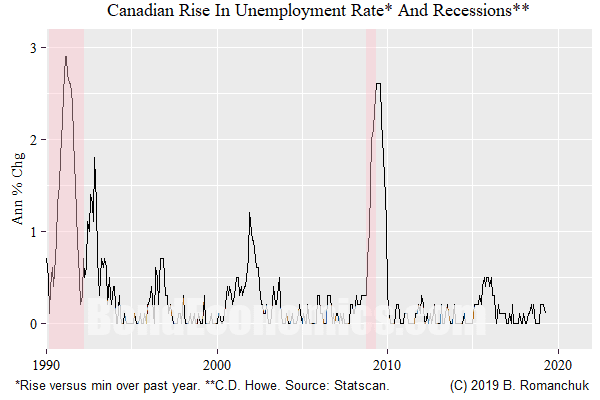 The chart above shows the rise in unemployment rate versus the trailing minimum value over the past 12 months (including the current month, so the minimum of this time series is zero). We see a big jump in 1992, as well as 2001, that were not classified as recessions (based on continued growth in other economic activity series).

I would argue that the rise in the unemployment rate overshadows the other activity indicators for two sets of reasons. 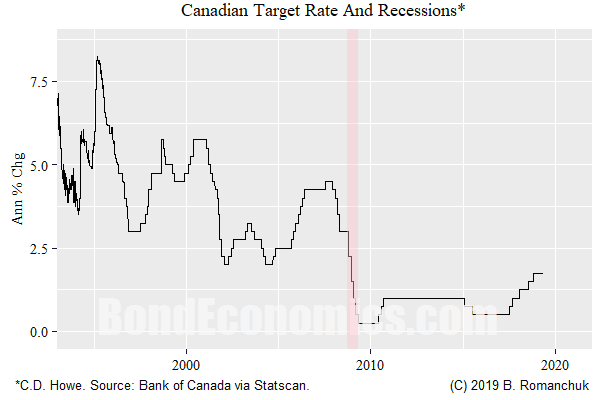 My comments above on the importance of the rise in the unemployment rate are not purely my opinions: the Bank of Canada reacted to the weakness in the labour market (chart above). From a bond market participant's perspective, the drop in the target rate from 5.75% in January 2001 to 2% in 2002 is what you are paid to forecast, not what the C.D. Howe Business Cycle Council thinks. 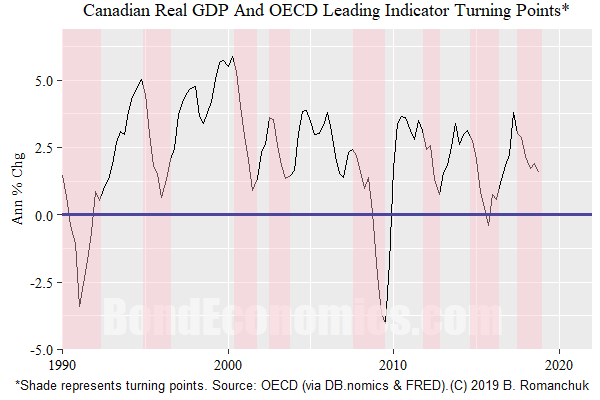 However, it is possible to get a definition that is perhaps too jumpy. The figure above shows Canadian real GDP, and the "turning points" defined by the OECD leading economic indicator. (URL: http://www.oecd.org/sdd/leading-indicators/oecdcompositeleadingindicatorsreferenceturningpointsandcomponentseries.htm.) The OECD has these indicators for most (if not all) of the countries in their data coverage universe.

The shaded regions show where the OECD leading economic indicator dropped from a local peak to a local trough. It does align very well with the acceleration and deceleration of real GDP growth, so these indicators could be useful for some purposes. (For example, financial markets might be sensitive to such acceleration.)

However, the "negative turning points" appear to be too numerous to be taken as a definition of a recession. For example, we saw very little in the way of a rise in the unemployment rate during two of the episodes after the Financial Crisis, and only about 0.5% in the third (below). 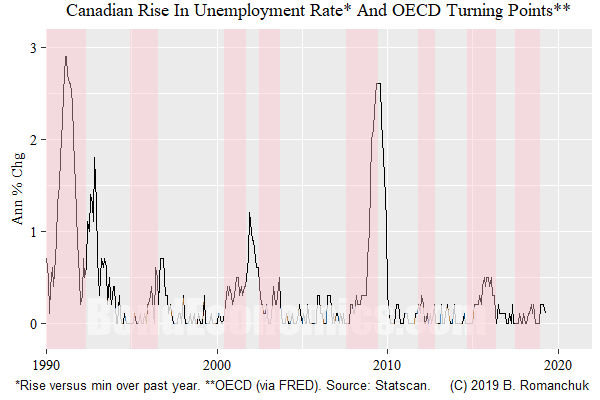 As the Canadian experience shows, deciding which episodes qualify as "recessions" can be debated. The safest course of action is to make it clear what definition you are using, and apply it consistently across regions.