Throwing In The Towel On A 4% Fed Funds Rate 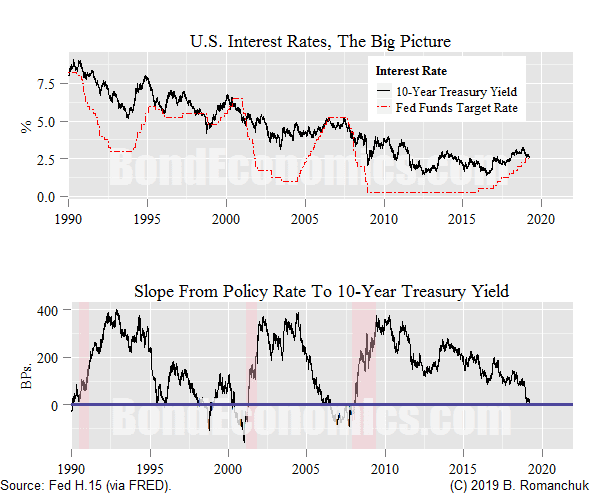 Since I do not do market forecasting, my comments on the actual state of bond markets have been sporadic. I just want to refresh my views, particularly since I have had a recent increase in readership. Although writing a book on recessions obviously skews my thinking, my argument is straightforward: the U.S. Treasury curve is priced so that the next big move is down, and the likely trigger for cuts would be a recession. That recession need not be imminent; if we look at the 10-year (as above), it just has to hit in the next 9 years or so.

Since that view is somewhat obvious, I will not belabour the point. At the moment, I am slogging through the deep theory parts of my book, and will return to the empirical side of recessions. At that point, I will have more interesting charts to share (although my book will likely truncate discussions to data ending in 2018).

The quick summary of the theory is that the "interesting"* recessions are the result of a collapsed of fixed investment, and this quite often is associated with a disruption in credit markets. (On paper, the credit markets could avoid turmoil; in recent decades, this has not been the case. That said, the credit market dislocations need not be as drastic as seen in 2008.)

Fixed investment in the United States has not been extraordinarily strong, so the advantage is that there is less need for drastic cutbacks. If one wants to sound like an internet Austrian, if investment is low, the scope for malinvestment is necessarily smaller. Nevertheless, we live in a world dominated by multinational corporations; disruptions could hit from any quarter (and this sensitivity goes beyond the conventional way of assessing the openness of an economy by looking at trade flows). However, one needs to only look at the 1998 episode (note the curve inversion in the chart above) to see an example of the United States shrugging off overseas turmoil (the Asian Crisis).

The downside to yields is determined by one's assessment of recession odds. What about the upside?

The Federal Reserve has been very transparent, and acting exactly like New Keynesian theory suggests they should. They believe their models, and their models assume that interest rates are a powerful lever for economic trends. The economy is stuck in some form of steady state, and so the level of the policy rate is not going to be far where the models would estimate is supposed to be.

The only things that causes a breakout to the upside in yields are:

The data have wiggles, perhaps seasonality issues created by the Financial Crisis persist. It would not take much to get Fed policymakers to be more optimistic. That said, the glacial pace of rate hikes suggests that it would take a really long time to get the overnight rate to 4%.

Realistically, either a change in personnel at the Fed -- or a reaction to a hefty loosening of fiscal policy -- is the main scare stories for big movements in bond yields. Such changes have precedents, but you cannot forecast them by reading the tea leaves of time series.

Incidentally, the current configuration could be seen as a vindication of Modern Monetary Theory. If one assumes that interest rate policy is not particularly potent, relatively tight fiscal policy will eventually smash the policy rate to the zero lower bound. If the real world does not resemble neoclassical model dynamics, the estimated neutral rate ends up acting like a moving average of historical rates. Unless we get a personnel change at the central bank, we end up with observed rates chugging along at low levels.

Unless something big injects some excitement into the system, the policy rate will look like a long-term moving average of the historical policy rate. In turn, that becomes the mean to which bond yields revert to.

* Recessions are just a downturn in activity. There's a lot of ways that this can happen, such as a hefty fiscal tightening. However, what we are interested here are recessions that are the natural result of the processes of industrial capitalism.