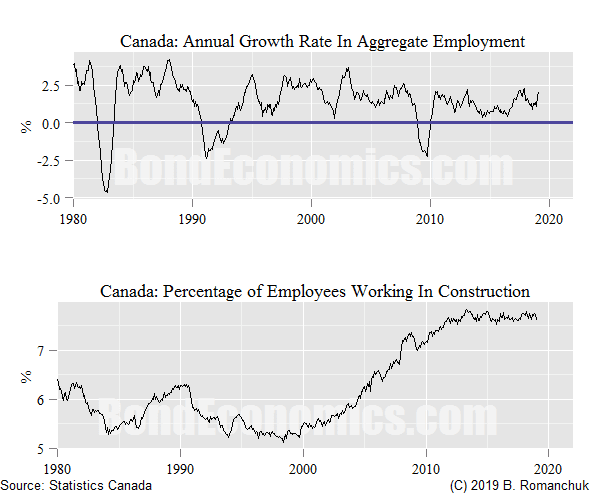 The top panel shows the annual growth rate in all jobs, which ticked up in February. The growth rate since the Financial Crisis has been mediocre, but no sign of immediate weakness here. The bottom panel is the point of interest: the percentage of employees that work in the construction industry.

If we look over the full time history, we see that construction got hit hard in the early-to-mid 1980s, courtesy of insane interest rate levels, the fading of the baby boom construction, and the slashing of infrastructure budgets at the municipal and provincial levels. (In Quebec, the past decade saw a boom in transit infrastructure spending courtesy of the piper being paid on infrastructure neglect.) There was a recovery by the early 1990s, presumably helped by condominium bubbles in Toronto and Vancouver. (I lived in Winnipeg and Montreal, and real estate was a bombed out disaster area until the late 1990s.) The (partial) popping of those condo booms, the collapse in commodity prices, and the movement to austerity shrunk the construction industry.

Starting around 1998, the Canadian Mortgage and Housing Corporation (CMHC, a Crown Corporation) launched a badly-thought-out process of loosening mortgage regulations. We saw a hockey stick chart in house prices, and the rise of construction. This secular rise in construction helped dampen the effect of the slowdown in the technology sector in 2000-2001. This continued until after the Financial Crisis, when spooked Canadian regulators saw what happened to our American cousins and their hands-off attitude towards mortgage regulations. Construction employment as a percentage of all employment has remained at a high level (7.6% is the latest value). 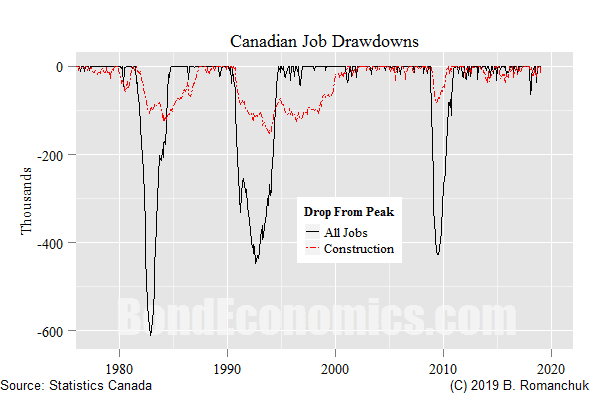 The chart above is a new chart, and it seems to be the easiest way to express the importance of construction in recession analysis. It shows the job losses from the previous peak for all employment, and just construction. (This works since the job numbers are both rising over time. If the pool of workers was shrinking, we would have to shift to the maximum over some trailing period.) The job losses are shown as an absolute number, so that we can compare the two changes visually.

It is no surprise that total job losses are much larger than job losses in construction. However, construction is an overachieving sector when it comes to job losses; the drawdown as a percentage of all jobs lost is much greater than the relative size of the sector in employment. For example, if we pick the worst month for job drawdowns (June 2009), construction accounted for 18.9% of the lost jobs.

Construction job losses are the most easily diagnosed direct effects of a real estate collapse; we could also add in job losses in the real estate as well as financial sectors, manufacturers of construction materials, along with various services (moving companies, legal, etc.). Of course, there are then second-round job losses that result from demand destruction.

Although I am permanently bearish with regards to Canadian housing*, I cannot see any plausible reason for an immediate collapse. The Canadian authorities managed to tighten lending standards at a good enough pace to stop the bubble from expanding, but without causing a collapse. Moreover, the global economy cooperated by not falling into recession since the end of the financial crisis.

Recession-watchers face an interesting chicken-and-egg dynamic. The other cyclical sectors of the economy have had their weight reduced, so that their gyrations are not enough to set off anything other than a localised downturn. Meanwhile, until job losses materialise in size, the fundamentals for the housing market seem relatively stable. In other words, even though a housing market correction would act as a nasty accelerator to the downside in a recession, it is unclear whether the housing market can achieve recessionary conditions on its own.

* Since I had an extension put on my house last year, I am a classic example of a fully-invested bear.