Real Estate And The Cycle 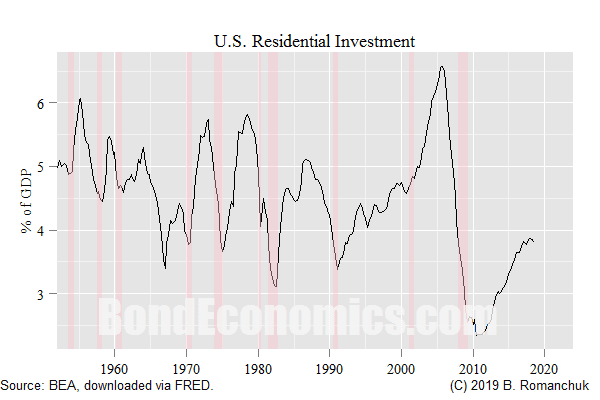 Real estate -- particularly residential real estate -- is an extremely important factor when discussing recessions in the modern era. To a certain extent, real estate is where economic theory goes to die. One possibility is that the theory was largely developed when the norms in real estate investment were conservative, so attention was moved to the industrial sector. However, the herd tendencies in the housing market may now overwhelm the industrial cycle.

(This article is a set of notes about the housing market. I started laying out my book on recessions, and I realised the need for a chapter on housing investment. I want to lay out some of the ideas that I mulled over while I was losing in a curling tournament down in the United States. The article is somewhat long on assertions, and missing the research to back up those statements. I will be filling the details as I turn to that chapter.)

The chart at the top of this article underlines the importance of housing with respect to recessions, which shows the percentage of GDP in the United States that residential investment represents. If we focus on recent decades, the eye is drawn to the relentless climb until 2005, and then the spectacular fall heading into the Financial Crisis. It should be noted that this weakness was underway well before the collapse of the financial markets; to a certain extent, the excesses that were uncovered at the end of the cycle overshadowed the much broader weakness that doomed the economy. Conversely, the lack of movement around the 2000 recession helps explain the mildness of that recession -- for people not connected to the technology industry.

I will outline some of the main points of interest in point form; turning them into a story that flows will be done later. The order of the points is somewhat arbitrary.


Most of these observations are straightforward. The only real theoretical challenges by what I discuss above is the questions of interest rate sensitivity: do they only matter for real estate? Possibly the only thing that may surprise readers is the importance of real estate for the economy -- although that may no longer be true after the Financial Crisis.