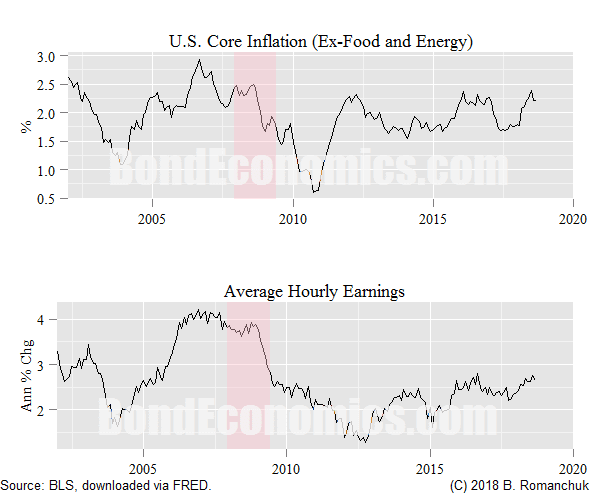 This article is a small somewhat empirical post-script to my previous article on classical/neo-classical views on inflation and the business cycle. My thesis is straightforward: looking at realised inflation rates is of almost no use for forecasting the business cycle in modern developed economies. I will note that there are disclaimers to that statement, discussed later. If we ignore the disclaimers, the proper forecasting procedure is to first generate a growth forecast, then back out an inflation forecast from the growth forecast. That is, inflation is an outcome, not a causal factor.

Since I cannot guarantee that all readers have read my previous articles, I will summarise my angle of thinking. I am currently putting together draft notes for an upcoming book on business cycles, with a focus on the determinants of recessions. I believe I will work "recession" into the title of the book, to make the objective clear. Since I believe that inflation is a lagging indicator and not a determinant of recession risks, I will largely pushing inflation analysis to a later book. However, this puts me at odds with mainstream thinking, where price level determination is a critical part of the theory. Since I want to survey major schools of thought and not just post-Keynesianism, I will need to justify my emphasis within the book, even though I will not pursue the subject in detail. (As for my breakeven inflation book, it is still in the editing stage. Still at least a few weeks until publication.)

I will illustrate my argument with a single data point: the post-2002 U.S. experience. In the book, I expect that I will widen to cover a slightly longer period (around the end of the 1980s), and for more countries. However, any reader with access to a time series database could just look at various inflation time series and draw similar conclusions.

The chart at the top of the article shows the annual rates of change of ex-food and energy (core) CPI and average hourly earnings. These should capture the notion of the domestic  price level for the United States, which is what is normally associated with the idea of "inflation." A rise in a particular price (particularly gasoline) may be distressing for consumers, but it is an isolated price change, and is not capturing the broad trend of prices. (I discuss headline inflation in the disclaimer section below.)

We can see that the inflation rates were soggy until 2003 or so, when they turned around. This was the lingering impact of the 2001 recession; slow recoveries from recessions are a common feature of the post-1990 experience (which is why I am most interested in that time period).

The housing bubble started to develop momentum, and effectively peaked around 2005 or so on a real activity basis; the price bubble continued, but activity narrowed towards speculative condo construction. (We saw the same pattern in the 2000 stock price bubble; old economy equities faded first, and then the speculative activity moved towards smaller and smaller capitalisation garbage stocks.)

Hourly earnings peaked at around that time, as did core inflation. I am not going to worry now about attempting statistical causality tests; my argument is that the inflation series were at best coincident with activity, and would be very sensitive to what measures of activity you pick.

My interest is more the recession, which is dated as starting in December 2007. It should be noted that weakness was already evident before then; the weak links in the credit markets were already unravelling before that time. (The consensus was focused on oil prices and equities, and so they were still debating whether there would be a recession at all well until in 2008, and even when the downturn was evident, whether it would be "only a technical recession.")

Both average hourly earnings and core CPI did not give any useful signals about the recession. One can argue that they rolled over ahead of the recession, but that is hardly meaningful when we consider the number of times those series rolled over in the post-2010 data set.

None of this particularly novel; inflation has long been relegated to the status of a lagging economic indicator. The only concern is theoretical: why is it safe to ignore inflation in analysing recession risk? The chart above provides the most convincing dat point; the reader is free to add more.

My above comments are meant to be limited in scope. I do not claim that they apply:

Furthermore, energy and producer prices are another issue.

I will quickly cover developing economies by stating that they were outside my investment mandate when I worked in finance, and so I never looked at them in detail. I do not claim to have any expertise for economies outside the developed economies.

As for the pre-1990 experience, my argument is that there was a huge structural break in the economy. I grew up in the 1970s, and to say that inflation psychology was entrenched is an understatement. That inflation psychology no longer exists, and as a post-Keynesian, I have no qualms with arguing that the economy behaves differently with respect to inflation. This is in direct contrast to mainstream economists, who argue that "deep structural parameters" determine behaviour.

As for the future, I obviously cannot guarantee that inflation psychology will not come back. At present, I do not see an immediate trigger for it happening. What might trigger the change is relegated to the following book on inflation.

Producer prices are more cyclically sensitive, oil prices in particular. In fact. oil price spikes have tended to precede U.S. recessions (I discussed this in Section 5.4 of Interest Rate Cycles: An Introduction.) Since oil prices feed into the industrial cost structure, and oil price rises are effectively a tax on consuming countries, one can come up with plausible reasons to explain the linkage between oil price spikes and recessions. That topic will certainly be addressed (again) in my upcoming book.

The final disclaimer is to note that my analysis here does not capture the spirit of modern mainstream economic thinking. Instead of looking at realised inflation (that is, what is the rate of change of the CPI), we need to look at expected inflation. Expectations are what matter for the economy; realised inflation is somewhat of a historical accident.

I will pursue that argument in future research for my book, which will probably show up in draft form. I would just note the major problem: how exactly do we measure inflation expectations? Surveys of economists? Consumers? Breakeven inflation? Each one is a different time series, and has different properties. Most of them are sensitive to oil prices (particularly breakevens), so we are back to the oil price story discussed earlier. Furthermore, we have very limited data availability for breakeven inflation rates outside the U.K.