Exports And The Cycle 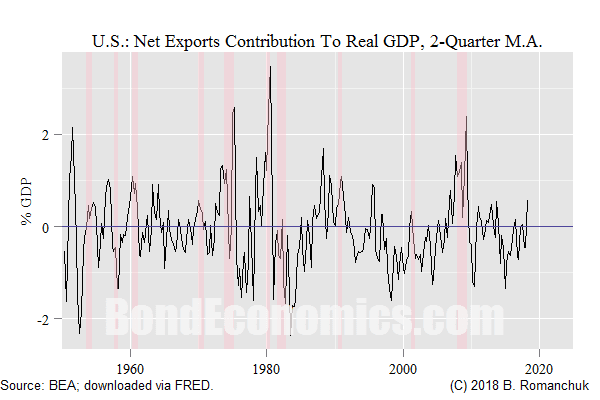 Not all "automatic stabilisers" in the economy are due to government policy; there are patterns of private sector behaviour that tend to act in a counter-cyclical fashion. The role of the external sector is an important stabiliser (at least most of the time). This article is a basic primer on the subject.


The chart above illustrates this effect for the United States in the post-war era. The time series is the 2-month moving average of the contribution of net exports to real GDP (as calculated by the Bureau of Economic Analysis). The shaded bars indicate NBER-defined recessions. The pre-1980 business cycles were a relatively high frequency and quite choppy, so I am not going to attempt to find any pattern in them. However, the recent experience has fit automatic stabiliser story very well.


That is, net exports acted as a drag during an expansion, and acts to counter-act a slowdown.

This is purely a mechanical effect: if we assume that a fixed percentage of consumption is met by imports, then a reduction in domestic consumption will cut imports by the same percentage. Meanwhile, if foreign countries are not affected by the slowdown, exports will be unchanged. This will improve the trade balance, raising GDP. (Exports add to GDP, Imports subtract.) For a country with a trade deficit (the usual modern situation for the United States), an equal percentage drop in both imports and exports is enough to improve the trade balance.

(Chapter Six of An Introduction to SFC Models Using Python gives an introduction to open economy models, and discusses the role of relative growth rates and net exports.)


It should be noted that the American experience will not match that of all countries. The United States has followed an implicit policy of planting American subsidiaries offshore, so as to get American products on the other side of trade barriers. Meanwhile. imports from strategic allies are welcomed, leading to the ongoing angst about the United States have "exorbitant privileges" due to reserve currency status. This means that the United States normally runs trade deficits during expansions.

Countries with an "export-driven growth model" will not feature the same level of stabilisation. In the developed countries, Germany most obviously follows this pattern, and historically Japan. However, export-driven growth is a strategy followed by many developing countries. For such countries, they are more exposed cyclically to a slowdown in their customer base. However, they will be in better shape if their export markets hold up, and their domestic economy slows down for some reason (banking systems blowing themselves up being a common problem).

This divergence means that we need to be careful about referring to net exports as being an automatic stabiliser.

Normally, if a country is under-performing economically, its currency will tend to depreciate. This price shift will make its exporters relatively more competitive, while imported goods are relatively more expensive. This would normally help push net exports in a positive direction. However, this is not guaranteed, as discussed next.

The effect of the external sector on developed countries in the post-1990 era has been relatively benign (if we put aside some hard cases like the euro periphery, where the economies were deliberately destroyed by foreigners). However, it should be noted that things can get ugly, a reality which some post-Keynesians emphasise.

The problem is that if a country is dependent upon some imports (energy or food imports being key examples), the cost of imports as measured in a hard currency are largely fixed, but the value of its exports might fall if the value of its currency collapses in the foreign exchange markets. It may take a total collapse in the economy to bring the value of imports down. The initial swing towards a greater trade deficit in response to the fall in the currency is known as the "J-curve effect."

If looking at developing countries, the J-curve effect needs to be kept in mind. However, for most developed countries, the agricultural industries have been heavily protected over the post-war decades. This has meant that price-insensitive imports are a much smaller part of total imports; the key price-insensitive import for most of these countries are energy products, and other industrial commodities. From a macro perspective, it is only energy imports that are big enough to move the dial on the macro economy. However, they are not inconsequential, as one may note the empirical regularity that modern U.S. recessions have all followed oil price spikes.