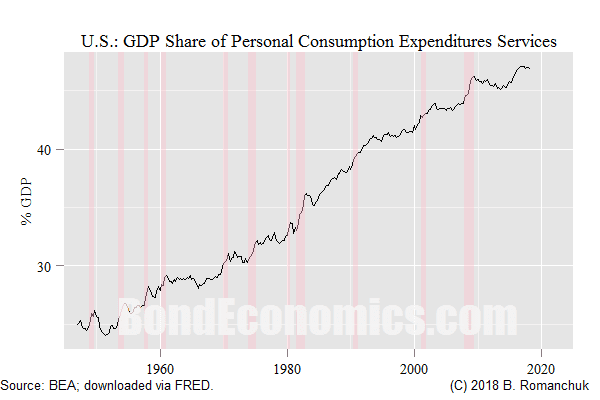 One of the problems with many theoretical approaches to the business cycle is that there is an implicit bias towards a manufacturing economy. The modelling of business sector decision making for manufacturing is quite different than for the service sector. This matters, as the developed economies are increasingly services-driven (figure above). For consumer-facing service industries, output is largely demand-driven. This fits much better with the post-Keynesian approach.

This article is discussing a bit of a theoretical puzzle that came up when I was thinking about the next large instalment of business cycle articles. (Once again, my next project after the breakeven inflation analysis book is one on business cycles.) Rather than mess up that discussion with a long digression, I have broken this out into a small stand-alone article. I am not going to argue that what I am discussing is extremely deep, as it is possible to work around. However, we need to keep it in mind when discussing the varying approaches to business cycle analysis.

We assume that that there is some kind of production function, which determines output based on two measurable macroeconomic variables:


Depending on the model, there may be other variables that enter into the production function: productivity, shocks, whatever. These other variables will influence the amount of final output, but we can think of them as influencing the output per worker.

The amount of hours worked is to an extent non-controversial; generally speaking, we do not get any marketable goods/services unless people are involved in producing them. The only theoretical debate might involve those who are projecting the development of self-replicating machines.*

The role of "capital" in production is the subject of an incredible amount of heated economic debate. From my personal perspective, the most notable part of the debate is that the partisans involved can get very angry about the subject, but I find it to be a complete snooze-fest.

The problem with most discussion of the notion of capital is the people involved made the mistake of getting a degree in economics. If they instead played a lot of video games, they would have a lot easier time discussing the subject.

If we wanted a plausible-looking simple model that somewhat looks like the real world, the economy of a game like the original Warcraft might do. In that game, you would have a number of peasants that you could assign to chopping wood, or digging gold. Once you accumulated enough wood/gold, you could expand your building infrastructure. In the game, your capital at a time step is your stock of resources/buildings, and how you allocated your peasants determined production. Although simple, the best way to allocate resources is a tricky question. It is difficult to think of an aggregate of resources, as you needed the precise mix of particular good to achieve various tasks.

However, mainstream economists have fixed on a model that corresponds to an even more primitive video game -- the text-based Hammurabi (each computer had its own versions floating around). In Hammurabi, corn is the only resource, and you had a straight consume/invest decision. You either gave the corn to your people to eat, or you stored it as seed to plant in later years. The stored corn corresponds (sort of) to "capital" in such models. The production function in Hammurabi was relatively straightforward, quite often being a multiple of the corn planted (the multiple being random, representing growing conditions).

If you think of capital in a mainstream model as being corn in Hammurabi, it ends up being somewhat plausible. The problem appears to be that the mainstream is working in a barter framework, and they use the dollar value of capital to stand in for the real value of capital. This obviously will not work, as there is a big difference in the real output capacity of a $1 million machine tool and a $1 million investment in asset-backed commercial paper.

Although this is a big theoretical problem, I would argue that we might be able to get away with pretending that we can aggregate everything, and just use a single aggregated capital stock. As long as we do not mix up financial assets with that capital stock, we may have a relatively plausible model (although the actual decision making is far-removed from real world business decisions). The quality of the models is an empirical question.

Once we get past the question of capital, firms then need to decide how many hours to work employees. This is an abstraction from reality, as for most hiring decisions, what is decided is the number of workers. However, it is possible to have employees run overtime, and some firms normal workload relies on a certain amount of overtime hours; they eliminate overtime only when demand is slack. (Since overtime hours are better compensated, employees generally do not mind this strategy, at least if the number of hours is reasonable.)

Mainstream theory wants equilibrium, and the standard assumption is that the number of hours worked results from an equilibrium between supply and demand. Some models (that I am less familiar with) might muck around with the equilibrium assumption, but the basic principle is that hours work and demand are determined simultaneously.

If we have a model where the time steps represent 40 years (e.g., overlapping generations models), this is perhaps reasonable. Given that amount of time, employers will adjust the number of employees to match demanded output. However, a 40 year time step is a categorically insane time increment for a business cycle model; given that recessions have been normally a few months in length, we cannot really capture the dynamics with a time step longer than a month. (Quarterly might work, but then most recessions represent a one or two period blip versus an expansionary trend, and in my opinion, we will lose too much of the potential dynamics.)

Once we are looking at a time period of a month, it becomes much harder to believe that output and hiring decisions are decided simultaneously. It might be possible to trim hours or cut back temp hiring within a week or two, but most firms cannot ramp up/down their employment levels that quickly. We are stuck in a situation where firm planning for a period has to occur before it is aware of effective demand for its products.

Post-Keynesian models have a simpler structure mathematically, and quite often embed such decision lags into the model. Models based on equilibrium arguments are in much greater danger with such a situation, as there is no notion of equilibrium: firms make unilateral decisions about hiring, and only after those plans are made, do we determine the outcome.

(I would guess that mainstream economists would attempt to rescue the equilibrium approach by using the notion of expectations. Firms can see various policy decisions, and adjust hours based on what they expect will happen. Market prices will be continuously moving, providing a signal whether or not their expectations are coherent with the rest of the economy. Although that story might be plausible for things like the mining industry, it is a stretch for the vast majority of goods and services in the economy, which have administered prices.)

We can now circle back to services. If we accept that business hiring decisions are made in advance of knowing what effective demand will be, what happens if their decisions are misguided?

In manufacturing, inventories are the buffer for business forecast errors. If we assume that we have a stable production function, output will match what is implied by the hiring decision (since capital at the beginning of the period is fixed). If demand falls short of what was forecast, there will be an unplanned inventory build. (Firms may have planned to change their level of inventories, so rising inventories is not by itself that demand fell short of forecasts.) Since growing inventories is a form of investment, the shortfall does not imply an immediate drop in profits (via the Kalecki profit equation). Instead, the problem is that there is a cash flow drain associated with the inventory build; the cash level of the firm drops (since it has to pay to produce the goods), offset by the growth in inventories. Since firms are ultimately cash-constrained, this process cannot continue indefinitely. They will need to cut production so that it is below sales, so as to replace inventory with cash. This planned production cut is the problem, as this is normally achieved via reducing employment (destroying capital to reduce productivity is generally not viewed as helpful).

The result is that we get a lagged relationship between demand and output in manufacturing. Services, however, are different. Since services generally cannot be held in inventory, they are normally valued on the basis of what is sold within the accounting period. (To be honest, that statement is a guess based on what I have seen from national and firm accounting; there might be exceptions that I am unaware of.) That is, output is literally demand-determined.

For example, take a barbershop. No matter how many barbers are being employed, the output is going to be equal to the haircuts given to customers that walk into the shop. If the barbershop owner makes a mistake and has too many barbers on staff, he will lose money immediately on the shortfall. There is no way of having the idle barbers stockpile haircuts for a future day (although they could be put to work doing maintenance or cleanup that they would not have otherwise done).

It is clear that this situation causes some deep problems with the usual interpretation of equilibrium. It is abundantly clear that barbershop owners know in advance how many customers will walk into the shop during the day, and hence the required amount of staff. Pretending that price signals can guide expectations is just plain silly, since haircut prices are not continuously traded in futures markets.

I am unsure whether this distinction matters greatly from a practical perspective. Measured output in a services-driven economy should be more demand-driven, but given the difficulties in measuring total economic output, this may not be observable in the data. What will matter more is the importance of the inventory cycle. From what I have seen, a lot of the post-Keynesian discussion of the business cycle dates from the era when inventory cycles were more pronounced. With the rise in services, the emphasis on inventories may be somewhat dated.

* Fans of the Berserker stories should be nervous about that point.