One exercise that often needs to be done either by fixed income analysts is to generate a forecast inflation series. For an economist, such forecasts are often part of the job description. For a fixed income analyst, even if they are not attempting to forecast inflation themselves, they will need to generate the forecast series to calculate cash flows. For example, we need to calculate an implied inflation forecast to build up a fitted inflation breakeven curve. One thing to keep in mind is that we need a forecast series that is not seasonally adjusted to be useful for inflation-linked bond analytics, but it is often easier to generate a seasonally adjusted series.


(Note: This short primer is an unedited draft from my upcoming book on breakeven inflation analysis. The text is essentially complete, but I am only targeting publication in September/October. I've been distracted by a major home renovation project, so my writing output has been low recently. That project is now winding down, so I should be able to ramp up my writing again.) 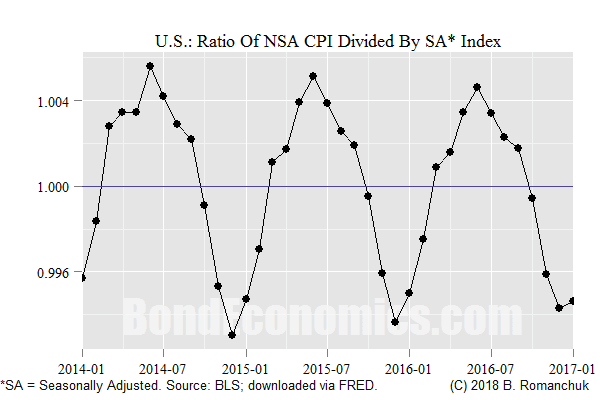 As seen above, the seasonal adjustment pattern for the U.S. CPI has been relatively stable over time (which is expected based on the construction method). It would be relatively reasonable shortcut to extrapolate the last year’s factors going forward. This allows us to take seasonally adjusted CPI forecasts (which are presumably easier to generate), and use them to generate non-seasonally adjusted forecasts.

The methodology can then be summarised.


I would expect that this technique appears extremely obvious for many readers. However, I spelled out the procedure, as it was not actually obvious to me when I first had to do the operation. My problem was that when I started in finance, I was a freshly minted applied mathematics Ph.D.; I wanted to find the most “rigorous” solution. This led me on a blind path: I wanted to work with the official seasonal adjustment algorithm. The problem is that the seasonal adjustment algorithm is described as mapping a non-seasonally adjusted series to a seasonally-adjusted one; inverting that mapping is non-trivial. However, given the uncertainty of an inflation forecast in the first place, who cares about getting the inverse mapping exactly correct? Approximations are your friend; you just need to know when precision matters (e.g., getting invoice prices and market quotes correct).