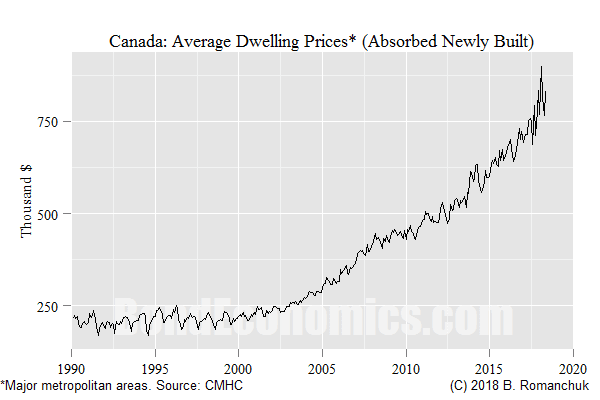 Canadian policymakers have blundered into a perpetual motion machine, which is more commonly referred to as the housing market. By underwriting the credit risk of the mortgage market, the government has allowed the funding circuit to continue in an uninterrupted fashion. The lack of a crisis has frustrated economic bears, and there is no obvious catalyst for their vindication yet in sight. In addition to outlining the Canadian situation, this article discusses some of the theoretical issues, as well as the policy implications.

The figures above and below are the twin hockey stick charts. (The dwelling price chart above is a series I am not familiar with; its back history matches data that I worked with. It includes both houses and condos.) We can see that mortgage debt (as a percentage of GDP) and average home prices were relatively stable during the slow growth 1990s. The Canadian economy underperformed until the end of the decade, coinciding with an extended austerity campaign. However, starting around the year 2000, home prices and mortgage debt went on a tear. 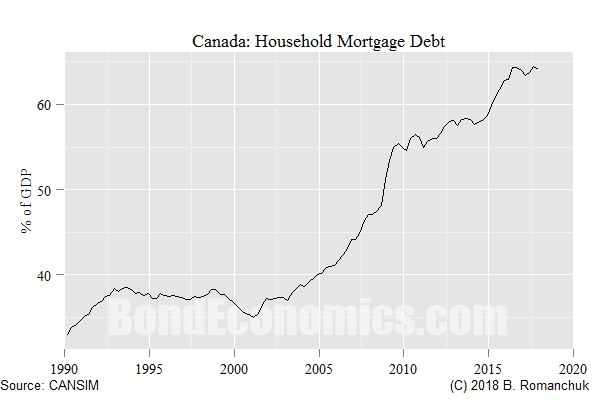 The divergence between Canada and the United States (as well other markets where housing bubbles popped, like Ireland) continues to attract scattered commentary. The key difference is straightforward: the monetary circular flow (discussed in my previous article: "Housing Bubbles and their Financing" ) was not snapped in Canada, despite a temporary freeze in 2008. The more brittle financing arrangements in the United States snapped, as weaker players failed. Meanwhile, the equivalent to sub-prime mortgages in Canada are those mortgages that require mortgage insurance, and that insurance was continued to be provided by CMHC.

My previous discussion of the circular flow of money in household lending deliberately simplified the difficulties associated with credit . As noted, there is no issue with financing any increased amount of mortgage debt (which is why debt levels can easily outpace nominal GDP growth): there is no need to find savers in advance. In the case of housing, the cash outflow from the home buyer is injected into the financial system, which allows for the mortgage borrowing. (Admittedly, there would need to be a certain amount of initial liquidity to allow the transaction to proceed, but it is refreshed as the financing flows through the system.)

Instead, the brake on the non-bank financial sector is that money often ends up in the hands of entities that are unable or unwilling to take credit risk. For example, foreign central banks will typically keep reserves in central government bonds. Other investors can counter-act the tendency for capital to accumulate in investment pools that do not take credit risk by allocating from government bonds to credit, but they will eventually reach a point where they can no longer sell government bonds. Once that reallocation limit is reached, the monetary loop might be broken.

The non-bank financial sector allows financing to continue by having other entities absorb credit risk, but without providing net funding. There are two main mechanisms to achieve this.

On top of the failures of mortgage lenders, the U.S. system failed in 2008 because the major suckers institutions providing CDS protection got blown out of the insurance-writing business, and the non-guaranteed federal housing agencies were put into receivership.

By contrast, the credit guarantees in Canada are provided by the CMHC, which is generally believed to be backed by the full faith and credit of the Canadian Federal Government. (Disclaimer: I must emphasise that I am not a securities lawyer (nor credit expert); I have no way of judging whether there are any weak links in the guarantee of CMHC.)

We can now return to the "hockey stick" charts. The trend change in the late 1990s was no accident; it was the direct result of policy changes at the CMHC. The standards for getting mortgage insurance were gradually loosened, with the trend peaking at the ability to get mortgage insurance with no down payment. Having seen the pandemonium in the United States first hand, some sanity returned to Canadian lending regulation, and standards were gradually tightened after 2008.

I have been discussing the Canadian situation since I started my blog in 2013. (I have been a perma-bear on Canadian housing since much earlier. Luckily for me, my wife bought a house before we got married.) I would point interested readers to my review of "When the Bubble Bursts" (by Hilliard MacBeth) for more background. (The book gives an excellent background from the perspective of Canadian personal finances.)

There is no reason for the Canadian housing market to implode solely because debt levels hit some magical tipping point. Unless there is some Achilles Heel to the financial system that I am unaware of, the housing bubble will be free to slowly inflate, which is what it has been doing pretty much after the roller coaster dip around 2008. The risk that hangs over Canada is some "shock" that causes widespread job losses; this would easily cause contagion in the housing market. And given the importance of the construction industry as an employer, a destabilising feedback loop would easily result. That said, since I do not see any particular trigger for such an event, so I am not forecasting such an outcome on any horizon.

I will conclude with a discussion of theory, and policy.

The behaviour of the Canadian household sector makes a mockery of the entire DSGE macro premise that we must have economic models that are based on optimising decisions of households. Instead, households are acting in a purely Pavlovian fashion: they will borrow every last cent they can get their dirty mitts on, and plow it into the housing market. To a certain extent, policymakers could attempt lead the economy by the nose by changing credit standards on mortgage insurance. (Note that policymakers in most other countries lack this ability.)

Unfortunately, they have no good way to calibrate the effects of this policy tool. If they tightened standards too much, they could trigger the long-waited (by the bears, at least) housing market crash. Cascading job losses from an imploding construction sector would trash the fundamentals of the housing market, and it is very much unclear when the rubble would stop bouncing. As a result, cautious tightening is about all they can do (and did).

However, this clouds our ability to analyse the Canadian economy from other modelling perspectives. One standard analysis track is to attempt to model the effect of interest rates (or whatever) on growth. That is, we want to stick some time series into some statistical blender, and infer coefficients on their relationship. This only works if the economy is actually being driven by those time series variables. If the driver is actually credit standards on mortgage insurance, any other relationships that might be picked up would be spurious. This then suggests that we should include the effect of mortgage insurance in our models. The difficulty is that it is unclear how we can quantify the changes in CMHC lending policy. The only obvious candidate is to use the data on mortgages (stock or flow). However this runs into the obvious problem that debt growth is mechanically linked to housing market activity (as discussed in the previous article). Debt growth and economic growth are two sides of the same coin; we know there is a direct relationship, and so looking at debt growth is not really adding new information to a growth model.

(I expect that I will return to the modelling issues raised by housing market dominance in other articles. I wanted to keep this article relatively focused on Canada.)


What Should the Canadian Government Do?

(Anyone who does not want to read unpopular political opinions might as well stop reading now.)

In the absence of access to a time machine, there is not a whole lot differently the Canadian government can do now. Earlier policymakers did spectacular damage to the Canadian national interest, but they all went off through the revolving door. Right now, the only "sensible" course of action is to hope Canada will never have a recession again.

The debate Canadians should be having: why do we think high house prices are a good thing? Although there is consternation regarding inequality in some quarters, many of the proposed solutions are political fairy tales. If we look at retail inequality, the housing market is a major engine, and there is an obvious policy lever to improve the situation.

High house prices are damaging to all young Canadians who have not received massive gifts from their parents. When I lived in southern England in the early 1990s, it was clear that the key advantage for the Canadian standard of living (in most of the country) was the low cost of shelter. (Toronto and Vancouver were relatively expensive, but they were still seemed reasonable when compared to London.) The explosion in home prices since then generated wealth gains for some, at the cost of dragging down living standards for everyone else. If this were purely a market outcome, one could argue that this is just a removal of a market inefficiency. However, this was not the case -- this house price rise was almost solely the result of governmental policy decisions.

The most obvious way to improve living standards for most Canadians is to engineer a fall in the house price/wage ratio. Rapid wage growth is not compatible with the inflation target. This leaves us with a controlled implosion of house prices as a policy objective.

Admittedly, the housing market might do this for us (as pointed out by the bears). Alternatively, the CMHC maximum loan size will need to be slowly reduced from its stratospheric $1 million level. Yes, that means that we are throwing Vancouver (and possibly Toronto) real estate under the bus. However, locking the Canadian economy into a permanent zombie state so that real estate lottery winners in Vancouver can hold onto their winnings is hardly in the national interest.