Professor Thomas Palley has once again launched a critique of Modern Monetary Theory (MMT) in "Modern Money Theory (MMT) vs. Structural Keynesianism." One could argue that there are some useful nuggets in his argument, but they are arguably behind the times. His critique is of how he perceives MMT -- which has only a limited relationship to MMT as it exists now.

I probably should have ignored his article, but too many people have discussed it, and so I do not want to leave the impression that his arguments actually represent weak points of MMT.

On the pure academic side, he summarises his views as:


I like to say that MMT is a mix of “old” and “new” ideas. The old ideas are well known among Keynesian economists and are correct, but the new ideas are either misleading or wrong.

I will put aside the "correctness" issue, and focus instead on the originality. If you are an academic that is discussing the history of economic thought, or worrying about the proper citation chain for ideas, originality is a big deal. Back when I was an academic, I treated the importance of originality seriously; I was pretty much the equivalent of a grumpy old man screaming at punks to get off the lawn. I do not have access to an economics research library, and so I am not the person to make judgements on originality in economics research.

That said, I have read the MMT scholarly papers, and I saw no particularly reason to be concerned about the originality of the ideas. The papers made the lineage of MMT abundantly clear. The figure below is my informal summary of the origins of MMT. 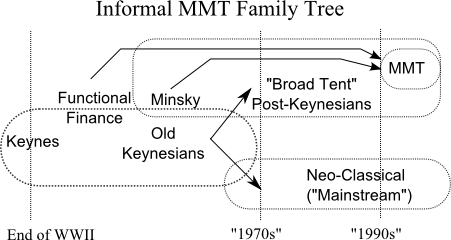 I have negligible interest in the history of economic thought, so I am not particularly concerned about any details in the above that might horrify pedants. The point is that it is clear that MMT is at the end of long line of development. If a non-economist can put together this family tree from reading the MMT literature, there is no excuse for an academic to cast aspersions about the originality of MMT.

In any event, this is moot. Modern Monetary Theory is no longer just the writings of a handful of academics, it now comprises a very large research programme. For example, I gave a presentation at the first MMT conference at Kansas City last year, and so that work is arguably part of the wider MMT research programme. His textual analysis of a few decades-old papers is no longer an adequate read of this wider body of theory.

These are content-free statements that have no empirical support whatsoever.


They have the ability to borrow from future generations; they can issue money; and they can create a demand for their money by imposing taxes. But that does not mean they are free from market constraints and market competition, and they also confront difficult political constraints. That limits what governments can do.

What are these constraints? Given the huge variety of political forms seen over the centuries, in what sense are "political constraints" binding on economic policy?


MMT is best understood as political polemic, aimed at beating back the budget deficit hawks. It does not add to economic theory, so talking of policy being made according to MMT does not make sense.

No, it's not just polemic. Thinking clearly about what the true constraints on fiscal policy -- real resource limitations, and inflation -- eliminates writing content free slogans about fiscal policy. Such as invoking mysterious "constraints" on fiscal policy that cannot be quantified, nor offer any guidance as to what happens when the alleged constraint is violated. One can debate the MMT language, but the complete inability of conventional economists to quantify the consequences of fiscal constraints is obvious when one presses the matter.

Misunderstanding of the Job Guarantee

Palley is thinking like an Old Keynesian, and completely ignores the structure of the Job Guarantee. Non-targeted fiscal stimulus -- infrastructure and military Keynesianism -- does exactly what Palley describes. A Job Guarantee is going to create jobs only where there is already unemployment, and so all sub-economies would hit "full employment" at exactly the same time.

One can debate the effects of the Job Guarantee. But any analysis has to start off with the obvious point that is not structured like Old Keynesian policies.


Second, MMT economists tend to say the central bank should park the interest rate at zero and forget about it. I think that is crazy. It is throwing away an important economic policy tool, and it would likely promote dangerous asset price inflation and financial instability which would come back to haunt us.

Sure, interest rates would be lost as a policy tool. But is it really important? Palley just assumes that it is, with providing any good evidence for that claim.

If we look at the post-1990 period, one can have a field day ridiculing consensus forecasts of "hockey stick" recoveries that have never materialised. Conventional economists of all stripes have been horribly and repeatedly wrong about growth.

One may note that the defining characteristic of the consensus is that they all agreed that interest rates for almost entire post-1990 period were "unsustainably low." This presumably led to their repeated wrong forecasts.

There is not a whole lot of empirical evidence to suggest that anyone understands the effect of interest rate policy, which then leads to the obvious question: why is it an "important" policy tool?

As is typical, he pretends that MMT economists have not discussed emerging markets.


Third, MMT economists say all a country needs is a floating exchange rate, and then it can use money financed budget deficits that push the economy to full employment. I think that is nonsense. Just ask an economist from Mexico or Brazil. Exchange rates matter a lot for economies, and the effects of exchange rates and exchange rate volatility ramify widely, often with very disruptive consequences.
The failure of MMT to provide good guidance for countries like Mexico is important. Economics should provide theory that holds up widely. MMT does not, which is a warning sign something is wrong.

Sure, everyone wants to pretend that all countries are equal. However, no serious commentator believes that Mexico has the same policy space as Canada. Mexican policy makers need to worry about corn prices on household welfare; Canadian policymakers have not had to worry about the effect of food prices on the household sector for an extremely long time.

The developed countries have largely ignored their currencies for decades; working from memory, the last coordinated forex intervention was when the euro was being trashed after its inception. Otherwise, Japan is the only country that kept the tradition of unilateral forex intervention alive. The argument that "exchange rates matter" in the context of the developed country has not been paying attention to the past few decades (modulo the euro peg system).

(Note: As some might guess, this section got some pushback from certain quarters. To be clear, I am just stating that the MMT research on emerging markets exists. Whether that research could be improved is a question that is outside my area of interest. If there are room for improvements, well that just leaves openings for research at upcoming MMT conferences.)

Palley inadvertently provides an example of the advantages of the MMT focus on operations. He cited his paper on "quantitative regulation." He argues that all financial intermediaries should be forced to hold reserves against assets. To describe it as sketchy is an understatement.
The MMT research community is in touch with legal scholars, as well as financial market practitioners. A proposal this far from operational reality would not get very far without being heavily corrected.

Email ThisBlogThis!Share to TwitterShare to FacebookShare to Pinterest
Labels: Economic Squabbling, MMT, Stuff I Read On The Internet