This article represents my initial comments on the question of the stability implications of locking interest rates at zero. Martin Watts, an Australian academic, had an interesting presentation at the first Modern Monetary Theory (MMT) conference (link to videos of presentations). Although MMT fits within a broad-tent definition of "post-Keynesian" economics, there are still sharp debates with other post-Keynesians. One topic of debate is the effect of permanently locking the policy interest rate at zero, which is a policy advocated by many MMT economists. In my view, this is a debate that is best approached by using stock-flow consistent (SFC) models.

One published paper that discusses this topic was written by Louis-Philippe Rochon and Mark Setterfield -- "A Kaleckian model of growth and distribution with conflict-inflation and Post Keynesian nominal interest rate rules."* This article was triggered by my initial reading of the paper; as the reader will discover, I have strong views on how this topic should be approached. I want to outline my thinking, before attempting to explain their methodology.

I will summarise the debate as follows. What happens to the economy if the government vows that the policy rate will be locked at 0% for all time? With the loss of monetary policy (as conventionally understood), will it be possible for inflation to be stable?


Two Channels from Interest Rate Policy to the Economy

There are two ways in which the policy interest rate can affect the economy. (Note that private sector interest rates are set as a spread over the policy rate; I am ignoring the movements in that spread for reasons of simplicity here.)

When we look at these two effects, it is clear that we have a much better a priori knowledge of the second effect (under the assumption that the yield curve on governmental liabilities is driven by the policy rate, which is arguably true for the floating currency sovereigns). If we have an estimate of the trajectory of the yield curve as well as the governmental borrowing requirements, we can map out fairly accurately the government's future borrowing costs -- which is someone else's interest income. There are some unusual possibilities to keep in mind. For example, a deranged central bank could buy up most of the governmental debt outstanding, and pay interest on reserves. In such a case, the intra-governmental flows are different, but the net interest received by the non-government sector is the same (except that some of it now comes from the central bank instead of from Treasury bills).

(Changing interest rates will also redistribute income within the private sector; this is more complicated to model, but in principle we can do it.)

The first effect -- the effect on behaviour is obviously more difficult to judge. There are many different ways in which interest rates can affect behaviour. Unfortunately, there is a tendency to ignore the income effects and focus solely upon the behavioural effects in economic theory (particularly in mainstream economic theory).

The role of a properly constructed stock-flow consistent model is to highlight the relationship between behaviour and balance sheets. Both effects are taken into account.

What does Interest Income Tell Us?

We can tell a very simple story about the relationship between interest rates and inflation using interest income.

We firstly note that private sector entities face a budget constraint: how much they can spend is limited by their existing financial resources and incomes, as well as what they can borrow. (In dynamic stochastic general equilibrium models, it is possible to borrow against the net worth of your three-legged descendants four billion years in the future, but that is not a behaviour we see in real-world behaviour.) Roughly speaking, if nominal prices rise, households need a rise in nominal income in order to purchase the same quantity of goods (under the assumption that borrowing capacity will not rise without a rising income).

Therefore, in order to sustain inflation, the household sector needs steadily rising nominal incomes. For workers, this is provided by wage inflation. However, not all households earn wages. In particular, some households survive off of interest payments.

As a result, a rising interest bill by the government would presumably help sustain an inflation. For those who wish for a more formal argument, Godley and Lavoie discuss this in the textbook Monetary Economics in the context of Model PC (which is implemented in the sfc_models framework). 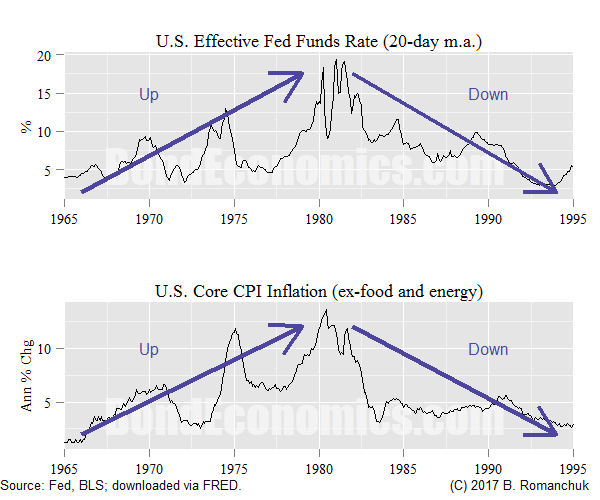 The figure above shows the historical relationship between the policy rate and inflation in the United States during the period 1965-1995.** In order to make my point really clear, I have added helpful arrows and text to highlight the big trend moves in these variables. (I have used the United States data as it was the easiest for me to chart; we see similar trends over that period in most of the developed countries. Having stared at multi-national interest rate and inflation charts for years, I cannot think of obvious exceptions.)

As can be seen, the data are consistent with the story suggested by income flows: raising the nominal rate of interest is associated with a rise in the inflation rate.

The previous paragraph probably caused considerable distress among a great many people. Pretty much everyone has been indoctrinated by economists into believing the opposite is true (that is, you raise interest rates to suppress inflation). Believing that raising interest rates causes higher inflation is enough to get you fired from most central banks.

What do we do?

It seems clear that we need to be careful about such analysis. We need models that take into account balance sheet effects as well as behavioural effects of interest rates, so that we have an idea of what the trade-offs are.

In particular, if we believe that institutional/psychological factors make negative inflation rates difficult to sustain (a belief that has empirical support), a permanent 0% nominal rate of interest has some inherently stabilising properties. Governmental liabilities will tend to have a negative real rate of interest, and drag down the income of bondholders. This helps suppress nominal income growth, and presumably inflation. The question then remains: can the presumed behavioural effects of low interest rates overcome this force? Even if we cannot answer the question from the standpoint of pure theory, we at least have a guidepost to gauge observed data.

In other words, we have to work with a relatively complete stock-flow consistent model to look at this question.

At the time of writing, the sfc_models framework does not directly support the ability to test the effect of changing interest rate rules. However, such an analysis may be one of my first extensions.

** Pedants could debate whether we should describe the Fed Funds effective rate as "the policy rate" during the period in question (1965-1995). I believe that this terminology is operationally correct, even if the central bank's policy framework had cosmetic changes.