Book Review: The Road To Ruin

James Rickards recently published The Road to Ruin: The Global Elites' Secret Plan for the Next Financial Crisis. His argument is that the risks of a financial crisis is building (possibly hitting in 2018), and that the financial system will be locked down as a result. (He argues that you need to buy gold to hedge against this.) The book is awkward, but has some interesting features. He describes various pop mathematics techniques for economic and financial analysis, although the book does not provide enough details to be able to evaluate them. James Rickards joined the LTCM hedge fund in 1994, and provides an insider's take on its collapse. He is also nostalgic for the economic framework of the 1950s, which parallels the views of a lot of post-Keynesians; the issue is that he is fixated on the gold peg, which was arguably an incidental feature of the 1950s economic institutions.

The book is aimed at a wide audience. Parts of the book are partly auto-biographical; the description of the downfall of LTCM was one of the highlights of the book.

The unsatisfactory part of the book is the opening chapters. In it, he outlines his theory that the "global elites" intend to implement:

From a casual glance, that sounds like a nutty conspiracy theory. My interpretation of the text is that was exactly was intended. His arguments on these topics are reasonable observations (although I disagree with many points), but he and/or his editors made a deliberate effort to make them sound as crazy as possible (without writing anything downright loopy if quoted).

My guess is that this was a marketing decision. It is certainly more lively than summarising your book as "complexity theory and Bayesian inference are really cool." Since these points did not appear to be completely serious, I will largely ignore them here.

A good portion of the book is a discussion of various popular mathematics that are floating around. He highlights Bayesian inference, chaos,  and complexity theory. (Behavioural finance gets an inevitable anecdote as well.) His description of Bayesian theory gives an example of its use, but the other concepts are not covered from a technical point of view. Saying that a more complex society is riskier is a reasonable argument, but it could be derived from historical arguments, without any reference to mathematics.

He describes how physicists and the CIA use these techniques, and we are meant to be impressed. However, just because a mathematical technique is useful in one area does not imply anything about its usefulness elsewhere. Frequency domain analysis (Fourier analysis) is the backbone of electrical engineering, yet is only rarely applied in economics and finance. Gee-wiz stories about physicists running big simulations is a standard trope of the pop mathematics genre.

His description of Bayesian inference provides the best details of the various techniques. The idea is to start with a number of initial hypotheses about the world, and then revise your estimated odds of their truthfulness based on incoming data. The objective is to make a decision without requiring the long runs of data needed by other techniques.

As Rickards notes, the problem is that you need to have good initial hypotheses for this to be anything other than a garbage in-garbage out exercise. I do not have strong opinions on this subject, unlike the people who get too deeply wedded to probability theory. (There's something about probability theory that causes people to divide into cults that champion their preferred interpretation of probability density functions. Even when I was a hardcore academic mathematician, I felt that these probability theorists needed to get out more often.)

Rickards incorrectly tries to paint Bayesian inference as being a heterodox view. On page 12: "Mainstream economists assume the future resemble the past within certain bounds defined by random distributions." Although I enjoy slagging off mainstream economists, this is a major misrepresentation. Currently, every second mainstream academic economics paper has "Bayesian" somewhere in the title.

Rickards repeats the various stories about chaos theory that have been a staple of pop mathematics for a couple of decades. He heralds the work of Edward Lorenz, a meteorologist, who allegedly discovered the notion of chaos in 1960. He lumps chaos theory in with complexity theory, which  is a grave disservice to the rest of complexity theory.

Complexity theory is more interesting, but it poses its own set of problems. The idea behind complexity theory is that you start off with a web of connected small actors, each of which follows simple rules. The overall system displays behaviour that would not be expected based on the low level behaviour -- emergent behaviour.

For example, Civilization was published by Sid Meier in 1991. It consists of many simple systems that create delicate interactions. This makes the game engrossing, and helps create the illusion of being an in-depth simulation. (It probably delayed finishing my thesis by a couple of weeks.)

Software like Civilization could easily be used as a teaching tool. I have no problems with teaching models; this is how I approach stock-flow consistent models. However, no number of hours of playing Civilization is going to give someone a proper understanding of the collapse of the western Roman Empire. That is, we cannot assume that the real world has some property just because a teaching model has that property. The advantage of a simple model like SFC models is that it is much clearer what is going on -- and the associated limitations -- than a complex black box.

Furthermore, from the perspective of macro, we are primarily interested in the emergent macro behaviour. Why spend time trying to tune individual entity models so that they get emergent behaviour that matches data, instead of just trying to fit a relationship to observed aggregate macro data?

Like some other mathematical visionaries, Rickards spending considerable time slamming all the clods in finance who rely upon the normal probability distribution, which we also use to calculate Value at Risk (VaR). Of course, VaR is the only risk measure that we ignorant fools use.

However, none of the tools my team built relied upon an assumption of normal probability distributions. In the external analysis that I respected, I cannot recall anything that relied upon the normal distribution, so I have little reason to believe that we were an isolated band of geniuses.

Sure, the risk managers used VaR. However, "VaR" was calculated a few different ways; the original technique that used normal probability distributions was just one variant. And like everywhere else, VaR was supplemented by other risk measures.

Value at Risk is used for a reason: how do we discuss the global risk profile of a multi-asset class portfolio? (The problem with other risk measures is that they tend to be biased towards one asset class or another. The managers of the penalised asset class are not going to be happy with that unfairness, as it would mean that their risk-taking capacity would be crippled.) Until someone can give an alternative answer to that question (and not just wail about the normal distribution and fat tails), firms will keep using it.

Rickards economic views are interesting. Although he is a fan of Schumpeter and gold, he essentially puts forth the 1950s as an economic utopia. This is position of many on the left, although they are a fan of the 90% marginal tax rates of that era (a detail that Rickards skips over).

A unilateral move to peg the U.S. dollar to gold is just a giant attempt at price fixing. Whoever implemented such a policy would be known as "President Chump" thereafter.

Some of Rickards' statements throughout the book appear questionable. I will just comment on a couple of examples that stand out.


Where major currencies, bonds, and gold are involved, moves of this magnitude formerly took years. Now they take minutes or hours.
This type of volatility may be new to currency and bond traders. 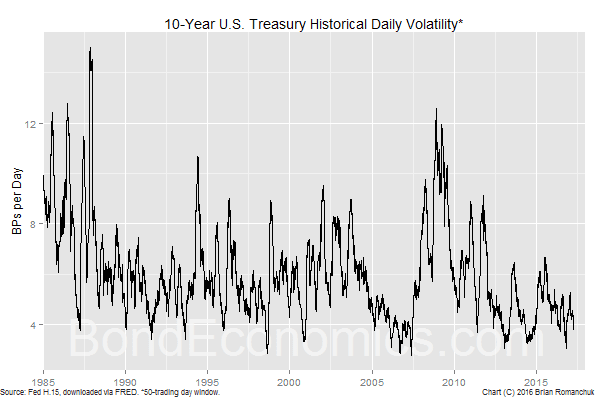 To be merciful, I am not extending the time series back to the "Saturday Night Massacre" of 1979. As for rapidity of movement, traders did not refer to the NAPM report (now ISM) as "Napalm" for nothing. Pretty much all of the volatility in rates is the result of yields gapping in one direction or another.


Still the presence of 35,000 tons of gold in government vaults, about 15 percent of all the gold mined in history, testifies to gold's monetary role beside official denials.

This shows ignorance about recent gold history: central banks cannot get out of the trade. The U.K. Chancellor of the Exchequer Gordon Brown earned global ridicule for his sales programme at the bottom of the gold market in 1990-2002, that was the end of the attempts of European central banks to exit gold. (The Bank of Canada was one of the few banks that managed to get out: they dumped their gold at the top of the market around 1980, rotating into bonds which also had peak yields at the time  -- possibly the greatest macro trade by a central bank ever). Meanwhile, China is buying gold as that is one of the few ways of exiting their U.S. dollar position. Holding the bonds of a geopolitical rival is not a risk-free investment. That is a risk calculus not faced by most developed central country banks.

One of the key takeaways of the book is that we are building up to a big financial crisis in 2018. Although such an outcome is plausible, there's not a whole lot of justification for it in the book. Saying that risks are building up in the system because of "complexity" is not a whole lot more informative than saying that we get financial crises in years that end with "8" (1998, 2008, ...).

He also emphasises that this will lead to "global elites" locking down the financial system. I understand that gold fanciers were traumatised by the de-monetisation of gold, but they should learn to deal with it. Commerce resumed quite happily in the absence of gold. Ramming a "bank holiday" down the throat of the financial system to allow a panic to sort itself out is an emergency measure that has worked historically. However, the financial services needed by the real economy is always restarted quickly thereafter.

As should be obvious, I am not a fan of this book. However, it is interesting to see the drift towards nationalist economics even among gold investors. Meanwhile, if you want a compendium of popular mathematics, this book is a gold mine.

* Don't get me started about the %$&# butterflies and hurricanes.