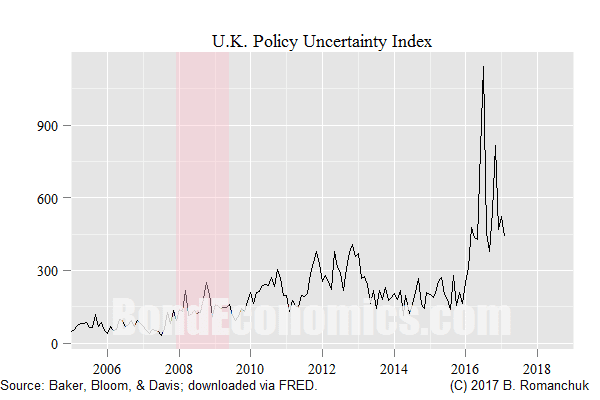 Unless someone gets cold feet, the British government is expected to trigger Article 50 on Wednesday, starting the process of the United Kingdom leaving the European Union (EU). Although markets are not panicking about this move (yet), this obviously creates a great deal of fundamental uncertainty about the outlook for the British economy. I do not have any strong opinions on what this means for the United Kingdom, but I believe that the effects should be largely localised to that economy.

(The chart above is the Economic Policy Uncertainty Index, developed by Baker, Scott, Nicholas Bloom, and Steven Davis. The latest data point is for February. The indices are described in http://www.policyuncertainty.com/media/BakerBloomDavis.pdf. I have not researched these indices, but the series above certainly looks like it summarises the U.K. situation well.)

What happens on "Brexit" depends upon the skills of the British negotiators. I am not in a good position to judge the outcome. Although the institutional framework is going to be stacked against the United Kingdom, the reality is that its economy features a lot of wealthy, freely spending, consumers. In the current environment of oversupply throughout the global economy, access to these consumers is a valuable commodity. Correspondingly, my guess is that solutions to allow trade to continue without major disruptions will be found.

The major potential negative I see is the willingness to invest in the United Kingdom; firms may prefer to invest in other EU countries. In other words, the confidence fairy might be hit hard. The obvious solutions to deal with such a shortfall is for the currency to weaken (which should be automatic), and looser monetary and fiscal policy.

To what extent the investment losses of the U.K. are just redirected to other countries, the net result is a zero-sum outcome for the global economy. My guess is that localised weakness in the United Kingdom would be enough to cause a chain reaction in the creaky euro area banking system, which is the main channel by which European weakness would translate in a global downturn.

In the long term, I am agnostic. Historically, the EU membership certainly helped the United Kingdom regain economic dynamism. (To what extent that dynamism helped the working class is another question.) However, the low-hanging fruit from opening up to the global economy has already been picked. One could argue that EU membership is equivalent to lashing oneself to the mast of a sinking ship. The factors that are suppressing growth in the developed countries are structural, and the EU enforces conformity of economic practices that perpetuate the weakness. 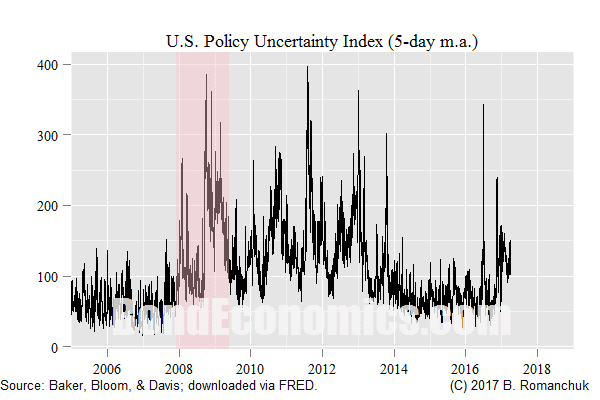 Finally, I attached the U.S. Economic Policy Uncertainty Index for its entertainment value above. During the Obama administration, we were treated to lectures by serious Republican economists about how Obama was reducing growth due to policy uncertainty. I have heard very little from said serious economists with respect to the 3-ring circus we had in Washington last week.

I have not had time to dig into the details of the index construction; it is surprising how little it has risen. That said, that may be realistic. Since about the only thing the Republicans agree on is quietly dismantling regulations and cutting taxes, there may be very little policy to be uncertain about.