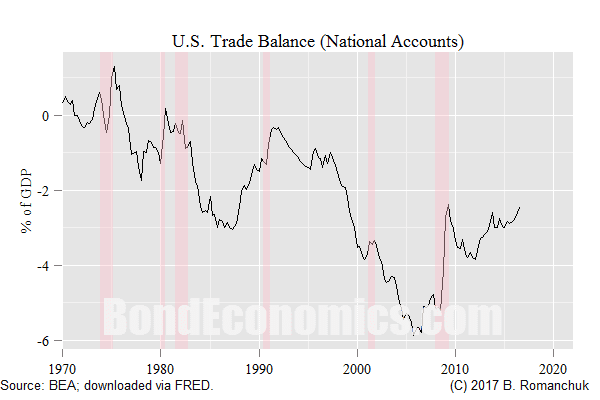 This article is a brief discussion of the relationship between growth and trade deficits in the United States. The previous two decades saw a marked deterioration in the U.S. trade balance, as depicted in the chart above. As a result, trade acted as a counter-cyclical brake on growth. One interesting property of the current cycle is that the trade deficit has been relatively stable when compared to that experience.

(This article is somewhat brief. I was ambushed by various software gremlins, and I have been getting ready to ship Abolish Money (From Economics)! to my copy editor.)

One of the more awkward things to deal with in economics is the fact that imports subtract from gross domestic product (GDP) in the standard GDP definition. The equation is:

Why imports have a negative sign in front of them is easier to understand if we discuss trade in services.

As an example, imagine that a consumer is buying a $100 piece of software that is downloaded from a software firm's web site.

(The situation is more complex if we are discussing goods that are imported. Imported goods generally enter into retailers' inventories before they are sold to consumers, and so we would also need to track those accounting entries.)

One key point to note is that we could not have negative GDP as a result of imports; the subtraction is just cancelling out consumption of goods and services that came from external production.

Are Imports Negative For Growth?

Whether or not imports are bad for growth is a point of dispute. Noah Smith wrote a recent Bloomberg article in which he attempts to debunk the belief that imports subtract from growth.  Most of the article is running through the cancellation effect I described above. The more debatable point is whether a drop in imports would increase growth.
I am not hugely interested in debating free trade orthodoxy, and so the rest of this article discusses the cyclical effects of trade on GDP accounting, without worrying about behavioural issues.

The Trade Deficit and the Cycle 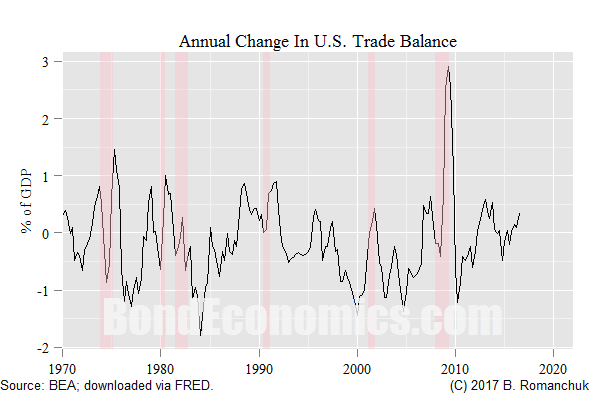 The chart above shows the annual change in the trade balance (based on the quarterly exports and imports of goods and services used in the GDP accounts) for the United States. This series is roughly equal to the amount that is mechanically added or subtracted from nominal GDP by the trade balance over a one year period.

(The calculations needed to determine the contributions towards real GDP are more complex, and I am not entirely convinced of their usefulness in this context. My key objection is that a price spike in imported energy prices represents a shock to domestic nominal incomes, and trying to ignore the price change seems silly.)

One thing to keep in mind when interpreting these charts is that I am scaling the amounts by nominal GDP -- which was continuously growing during this period. Therefore, if the trade deficit was stable at 2% of GDP (a straight line in the first figure) it would represent a steadily growing deficit in dollar terms, and so the annual change (second figure) would be negative amount.

During the 1990-2010 period, the change in the trade balance generally acted as follows:
As a result, the trade balance acted in counter-cyclical fashion (subtracted from growth during an expansion, and added to growth during a recession). The post-2010 experience is different, in that the contributions to growth are smaller, and are on average near zero. However, this may not be particularly surprising -- growth during the post-2010 has been tepid, and so we would expect the drag from trade to be smaller.

This article just introduces the basic relationships between trade and growth; I hope to do more detailed analysis at a later date.