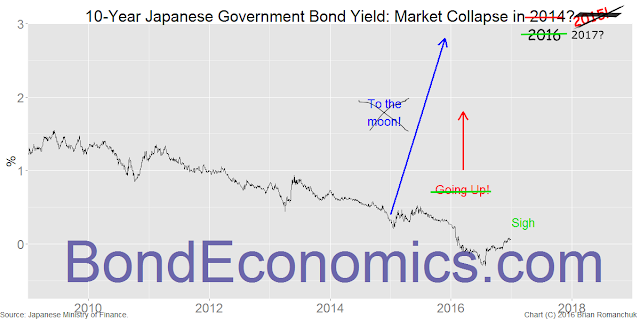 Happy New Year to all of my readers! Once again, the JGB market has defied predictions of imminent collapse in 2016, but perhaps Santa Claus will bring presents for suffering JGB bears in 2017.


It seems a safe bet that the emphasis on political economy that was triggered by the Trump victory (or Clinton collapse) will continue. Trade policy may be more on the radar, but I have my doubts that this will have any more effect on real world policy than previous yammering about "secular stagnation."

Given the general lack of enthusiasm behind fixed investment, developed economies are not particularly vulnerable to recessions. (The euro area is the exception, with various economies being driven into the ground by bad policy.)

The Fed will likely hike again, possibly with somewhat more vigour (two hikes!), which may finally cause some excitement in fixed income markets. This will not be enough to faze equity markets, which will probably continue their default pattern of slowly rising. I think we will need a shock of some sort to knock some of the weaker hands out of equity markets.


What will I be Writing About?

I am in the finishing stages of Abolish Money (From Economics)!, which should be available in ebook format sometime January. The paperback version would appear later (I need to approve a proof copy). It is safe to say that I will be avoiding any further writing on money for some time (although I will be publishing some excerpts).

I will be turning my full attention to my SFC modelling package, and writing what I hope will be a short introduction to it. (My book on money was supposed to be short; it ended up almost three times as long as initially planned. Oops.) My objective is to advance the package so that I can use it to illustrate some basic principles about the business cycle. This would point the way to a book of post-Keynesian analysis of the business cycle as the following text.