This article will be unfortunately brief. I started working on an adding financial asset markets to my Python Stock-Flow Consistent (SFC) Model library, and I was ambushed by various bugs. (As various economists have remarked, it is a bad idea to mix up stocks and flows.) It looks like the code is working, but I still want to look over the results before making longer commentary. However, the code did reproduce one of the distinctive implications of SFC models: raising the rate of interest increases national production (in nominal terms, at least).

The result -- which is presumably heretical amongst central bankers -- follows from the financial flow effects of the interest rate hike. In the chart above, the interest rate starts at 0%, and then there is a rate hike in the fifth time period.

The model is another modification of model SIM from Godley and Lavoie's Monetary Economics, but I added in a new financial asset -- Treasury bills. (Technically, I refer to them as deposits in the code, as they follow a deposit pricing convention, not the discount pricing that Treasury bills use.) The model is presumably similar to model PC from Monetary Economics, but I have left the government sector consolidated for now. (Model PC breaks the government into the Treasury and Central Bank.) 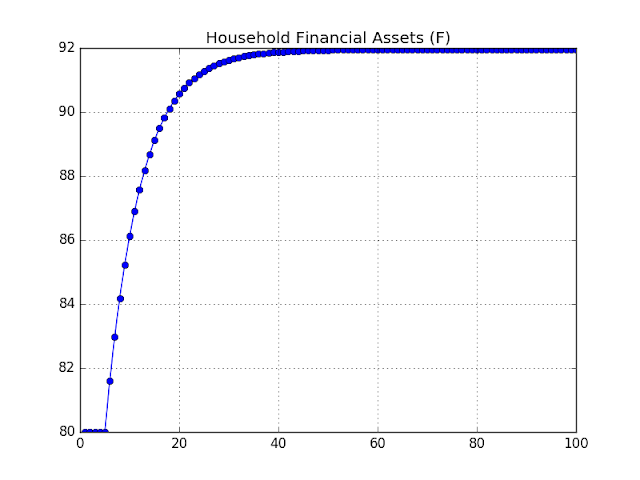 The driver of increased growth is the fact that government spending drives the model, and an increase in the interest rate increases interest spending. The increased deficit implies that household sector financial assets will increase. (The asset holdings are split between interest-paying deposits, and money, which pays no interest. Yes, I labelled that asset as "money" in my code, even though I should have labelled it "currency.")

The model makes no attempt to take into account any behavioural changes caused by higher interest rates (which is what causes standard mainstream analysis to argue that interest rate hikes slow activity). We would need a more sophisticated model to properly deal with that debate, and I am currently ramping up my modelling framework to take on questions like that.

The problem with SFC models is that they have too many equations. However, this reflects the reality that the number of inter-connections amongst multiple sectors and markets explodes as we add to model complexity. However, we need to add that complexity if we wish to capture interesting phenomena.

In the current instance, the number of equations made it difficult to track down the issues with my machine-generated equations. However, now that it looks like the financial markets have been properly integrated, I have dealt with one of the few remaining system generation issues. Going forward, the only areas of concern I have involve adding more sophisticated equation solution techniques.