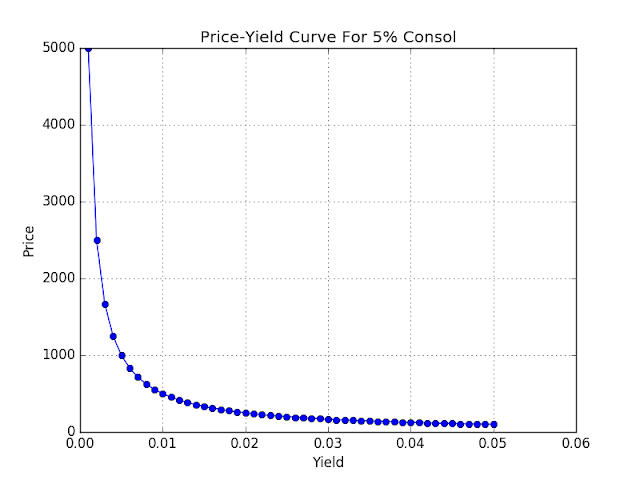 The current low yield environment generates considerable anxiety about the bond market. Some of this reflects the reality that it is more entertaining to read articles predicting doom. However, my suspicion is that this reflect the fact that the consol pricing formula is one of the few things people remember about fixed income pricing.

A consol is a perpetual bond that always pays a fixed coupon, but there is no final principal payment. For a 5% consol, if you own a piece with a $100 face value, you would receive $5 every year. (In financial mathematics, a consol is quite often defined as a security that pays $1 a year, which if you wanted a par value of $100, implies a 1% coupon.) Such bonds were created in the United Kingdom as a way of consolidating coupon debt into a single security (hence the name). However, these instruments are currently only of academic interest, as I am unaware of any such instruments being traded in any sizeable amounts. (I am not counting vanilla preferred shares -- which have the same cash flow structure -- but are not investable by most bond managers.)

With an infinite maturity, such instruments become quite valuable as interest rates fall. The figure above shows the price/yield relationship for a 5% consol. (The chart above shows the raw yield convention used in my pricer, and .04 corresponds to 4%.) Such instruments exhibit a very strong zero lower bound: it would literally be impossible to buy them at 0%, as it would require an infinite amount of money.

(As noted in my previous article, my Python fixed income pricing package is found at  https://github.com/brianr747/SimplePricers. The package is under construction, but it would be straightforward to install if you are already familiar with Python and Git. I will eventually write installation instructions. The file that generated the figures in this article is ex_20161018_duration.py, found in the "examples" folder. There is not a whole lot in the package right now, but I will be adding to it as I develop examples for my articles and books.)

The simplified price formula for an annual consol (assuming you are on the coupon date) is straightforward:

This expression obviously blows up as the yield goes to zero.

The simplicity of this expression means that such instruments work their way into economic models. Unfortunately, they reinforce the mysticism around low interest rates. 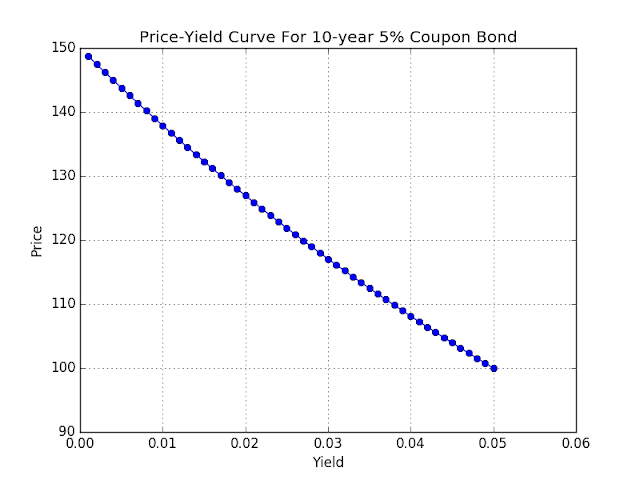 The figure above shows the price-yield relationship for a 10-year 5% coupon bond. The price of the bond only goes to $150 when the yield goes to zero -- the total cash flows over the lifetime of the bond are $150. Although the price-yield curve is nonlinear, you need a magnifying glass to see the deviation from a straight line (at least when the the bond is trading above par.) 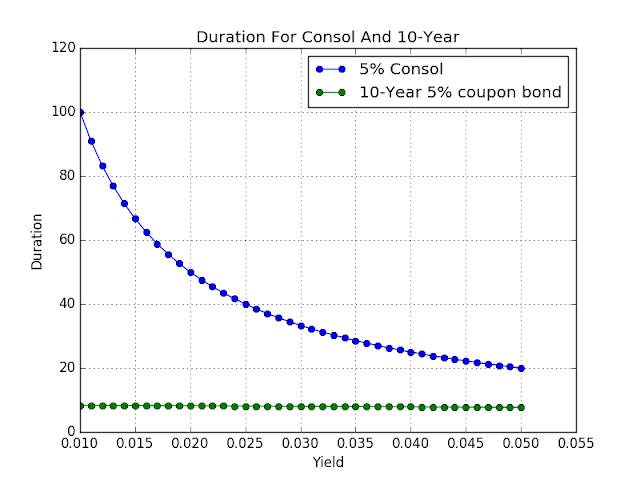 An alternative way of seeing this is looking at the duration of the bonds. The usual definition for duration is that it is the return sensitivity of a bond with respect to interest rates.* For example, if the duration of a bond is 8, a 1 basis point rise in the bond yield will generate a capital loss of 8 basis points (loss as a percentage of market value, not versus the principal value). The duration of 10-year bond does move slightly (as shown below), but it is a flat line relative to the duration of the consol. 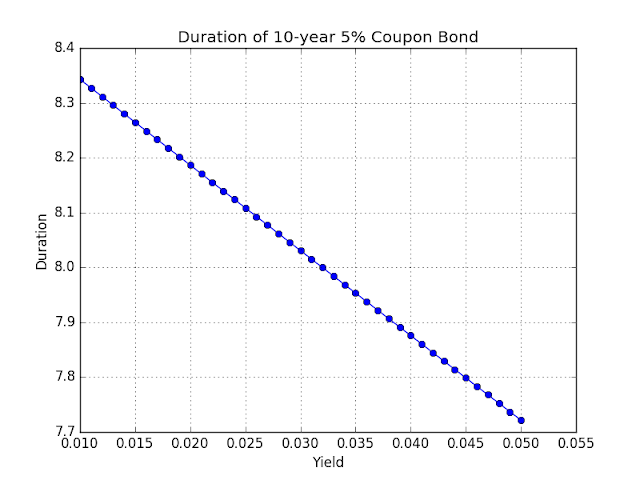 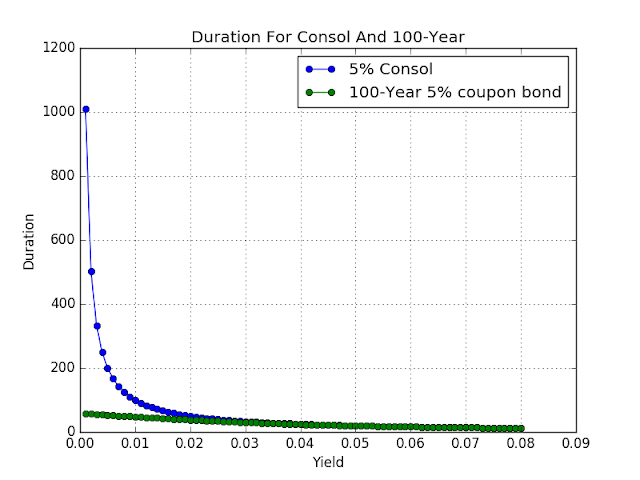 (UPDATED) I was asked in the comments whether extending the maturity greatly changes the picture. As the figure above shows, even if we go out to a 100-year maturity, the duration of a coupon bond looks fairly flat when compared to a consol. 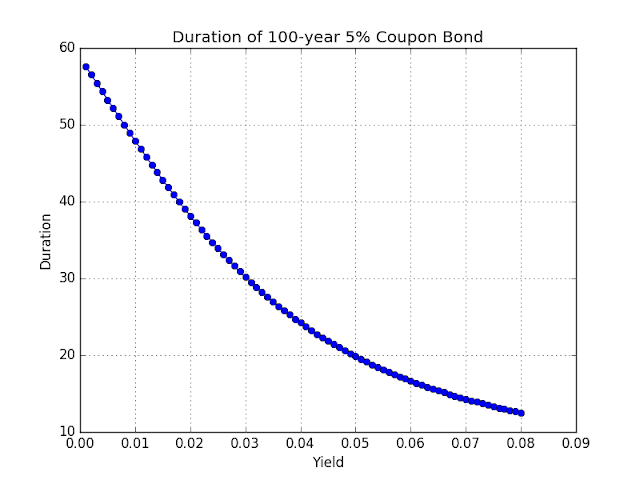 If we just focus on the 100-year bond (figure above), we see that the duration does roughly double when it goes from 3% to 0%, but it also roughly doubled when it goes from 6% to 3%. In other words, the shift in duration (which fixed income investors are used to managing) is not greatly disjointed when compared to the experience with higher yields.

Although it might seem that a 100-year bond is effectively the same thing as a consol, this is not true at ultralow interest rates. For a 5% consol, the present value of the first 100 years of coupons is $500, while the price of the consol at a yield of 0.1% was $5000. That is, (about) 90% of the discounted value of a consol at a 0.1% yield comes from cash flows that are coming more than 100 years in the future.

Although the duration of bond portfolios lengthen slightly in a low rate environment, the effect only matters if you are extremely concerned about micromanaging your duration risk (which most bond managers do). However, from the perspective of macro asset allocation, the risk posed by rate changes at low interest rates are similar to the risk posed by the same changes when yields are higher.

During selloffs, the U.S. bond market has historically been wracked by mortgage convexity hedging. The embedded call option in mortgages means that their duration can move much more dramatically than option-free bonds (sometimes called linear bonds). These blowups also contribute to the mythology around rising yields.

I will not that I am out of touch with the U.S. mortgage market, and so my comments here are only a guess. That disclaimer aside, I have my doubts that this effect is going to be as important going forward as was the case during previous bond bear markets. The collapse of consumer lending institutions after the crisis has made mortgage refinancing less automatic, and the holders of mortgage portfolios seem to be less aggressive in their hedging strategies.

In any event, what matters for mortgage hedging is the relationship between market mortgage rates and the rates on existing mortgages, and not the absolute level of interest rates.

* An alternative duration measure is the Macaulay Duration. The Macaulay duration is the weighted average maturity of the cash flows of a bond (or portfolio), using the cash flow payment amounts as the weighting. (A $105 principal and final coupon payment has a weight of 150, while a coupon payment has a weight of 5.) A consol has an infinite Macaulay duration. The Macaulay duration does not depend upon the market price of securities, and so is easier to calculate an understand. For this reason, it sometimes shows up in annual reports of fixed income funds. For an individual bond, there is a formula linking it to the usual definition of duration.