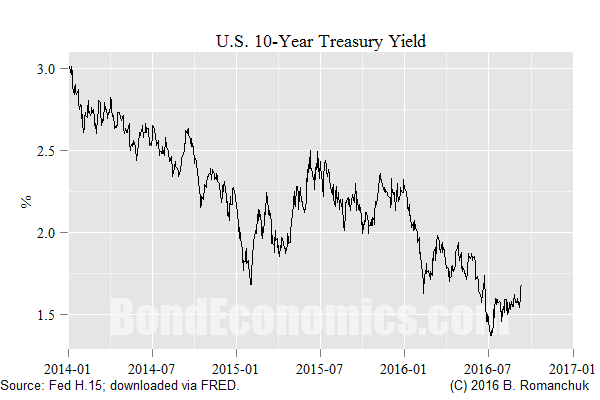 Although I am otherwise distracted, I just want to comment on the wave of news flow about Fed policy and bond market mayhem. From a big picture perspective, nothing has really happened.

With all due respects to the analysis of the recent Fed speakers, their comments did not really matter. They just underlined that doves will be doves, and similarly for hawks. What matters is what the committee thinks, and there is little information that suggests that a rate hike this year will be deflected. Although it would excite people if it were in September instead of December, I doubt the exact timing matters that much.

The only real risk to the bond market is that they start picking up the pace of rate hikes -- to 50 basis points a year, say. Such an acceleration of rate hikes will only happen if we see an acceleration in growth. The exact same thing was true in 2012,2013,2014,2015, and 2016. What information do we have that 2017 will be any different? Although we need to respect the reality that past performance does not always predict future results, we still need some plausible reason that we will see a structural change in growth rates.

Looking at the chart above, I fail to see how people can get excited about the latest yield moves. The 10-year Treasury yield is still lower than it was for most of the first half of this year.

The theory appears to be that the bottom of yields is reached, and the trend in yields is now up. Of course, market commentators have called the last dozen of the past zero secular changes in global bond yields over the past couple of decades, so that is a discussion that causes my eyes to glaze over. More seriously, even if a bond bear market has started, bond investors would need to ask themselves -- what causes it to accelerate? Unless there is a reason to believe that central banks are seriously behind the curve, a bond bear market is going to be as grinding and slow as the previous bull market.