Rather than write a few short posts, I am wrapping some comments into a "grab-bag" article. I just wanted to comment on European banking worries, and various controversies regarding money.

European Banking System Worries - Why I Don't Do Standard Forecasting

There have been a number of articles discussing issues within the German banking system. This is a potentially big issue, given the size of the balance sheets (and derivatives exposures) involved.

From a macro perspective, there are three main scenarios.

I am not the person to ask about the probability distribution of theses scenarios. Needless to say, the global authorities want to avoid scenario #1, and so a meltdown call relies on major policy errors.

From the perspective of macro theory, this situation illustrates one of the fundamental problems with mathematical models in economics. Any economic forecast produced by almost any model is going to be conditional upon which scenario we are in, as I doubt that any tractable economic model is going to incorporate credit analysis of particular banks.

Since we do not have a systematic way of determining which scenario will play out, we have no way of testing the predictive abilities of a model (keeping in mind that we are continuously facing such uncertainty). I will discuss this further in an upcoming article - "Whither Mainstream Macro?"

(The United States election - which I am otherwise ignoring in my writing - is another good source of uncertainty.)

Professor Nick Rowe recently penned the article "Cheshire Cats and New Keynesian Central Banks." (I previously wrote that I was uncomfortable with what he wrote, but it turns out that the part I questioned the most only appeared in his comments about Real Business Cycle models on Twitter. I do not wish to try to reconstruct his Twitter comments here, so I will ignore that point of debate.)

His thesis statement is:

How can money disappear from a New Keynesian model, but the Central Bank still set a nominal rate of interest and create a recession by setting it too high?
Ignore what New Keynesians say about their own New Keynesian models and listen to me instead. I will tell you how it is possible.

During the article, he discusses how we can interpret New Keynesian models (without explicit money demand functions) as having money, even though the aggregate money balance is always zero.

I have no problem with describing a New Keynesian model as a model of a monetary economy (although I am not particularly happy with the quality of the model). However, that is not saying very much. 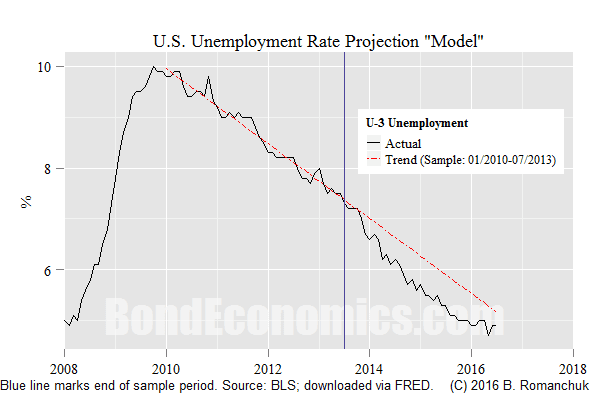 The figure above shows an extremely simple model for the U-3 Unemployment Rate in the United States. I am not going to hold it out as a work of quantitative genius, but at the same time, I have seen a lot worse out-of-sample performance elsewhere. (And the "out-of-sample" performance is truly out of sample; this was used in my 2013 "Battling Straight Line" article.)
I do not wish to give the top secret proprietary details of this model, but I will state that there is absolutely no use of monetary aggregates within its calculation. In other words, we do not need any monetary aggregates in a mathematical model of a monetary economy. The fact that the United States is a monetary economy is a monetary economy, rather than a barter economy, is an issue that is completely irrelevant to the model specification. The only way of determining whether it matters is to find a barter economy, and attempt to model its unemployment rate.

(This observation is partly a response to a reader who could not grasp how it was possible to eliminate "money" from economic models of monetary economies. The belief that money must appear as a model variable is a variation of the "microfoundations" fallacy -- that an economic model must be developed from the point of view of an individual within the economy.)

This fits into a pattern I have noticed.   With a couple admirable exceptions (e.g. Jordi Gali) most arguments from proponents of h money don’t really discuss the mechanics of how it would (not) work.  They take as a given that it would work and then immediately turn to why people don’t accept the goals that h money is meant to serve:
"What is wrong with you people? You know, benighted hard-money market fundamentalists like Mike Woodford, Olivier Blanchard or (I surmise) Larry Summers."

I will have to read the Gali article that Gerard references (I am waiting until I get to that chapter), but beyond that, I am increasingly mystified what to say about the topic.

The only alleged advantage I see of helicopter money is a reliance upon financial repression -- forcing banks to hold reserves at the central bank at below-market rates. That said, financial repression can be implemented at any time; no helicopter money needed. However, I doubt that putting banks at a competitive disadvantage versus the shadow banking system is a particularly useful policy in our current institutional structure.