U.S. Economic Cycle Still Rolling Along At A Subdued Pace 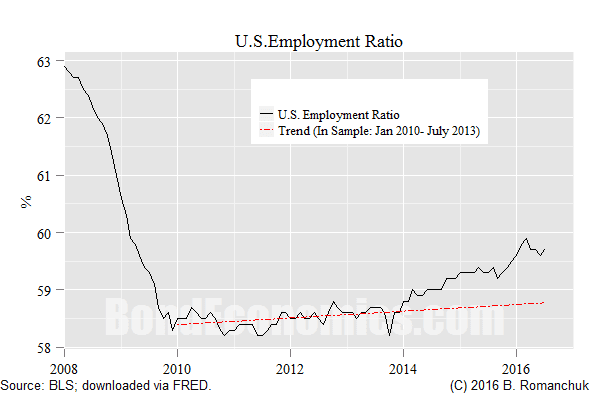 The U.S. Employment Situation Report for July was decent, underlining that the expansion continues, despite the large number of potential headwinds. Although most attention is upon the Nonfarm Payrolls numbers, the employment-to-population ratio ticked up again in July. At 59.7%, it is only up marginally versus the end of last year. However, the ratio has tended to rise rapidly at the end of recent years, which is a possible sign that the seasonal pattern has shifted. If this is indeed the case, having the employment-to-population ratio go sideways during the mid-part of the year would be consistent with the "true" underlying trend remaining on the improving trajectory that we have seen since 2014 (which is well above the mediocre trend line that prevailed from 2010-2013, which is shown on the chart). 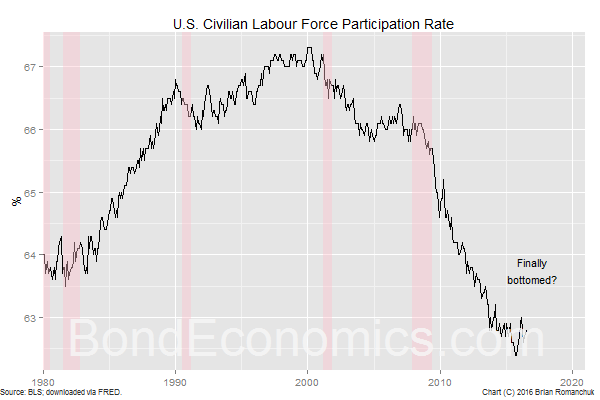 The headline unemployment rate (U-3) was stable at 4.9% in July. The Participation Rate (shown above) has been choppy, but it is at the level first reached in late 2013. If the economy can continue to produce jobs at a faster pace than demographic growth, the participation rate should tend to recover, allowing the unemployment rate to remain near its current level. (I believe that the attempt to pin the fall in the participation rate purely on demographics was just an attempt to provide an excuse for poor performance.) Correspondingly, I doubt that the U.S. labour market is going to overheat any time soon.

Although I have sympathies with the view that the Fed needs to avoid triggering a recession, I do not see a huge roadblock to another 25 basis point rate hike in December. Even the most dovish Fed members can hardly be spooked by a rate hike cycle that consists of hiking rates 25 basis points per year. (This view is already incorporated into the forward curve, so I will not dwell upon it.) 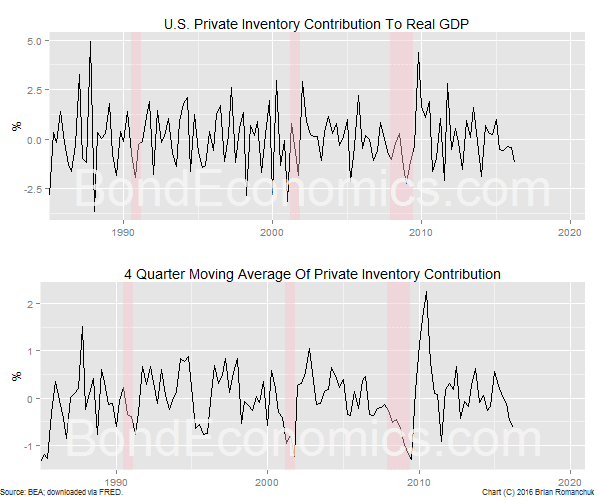 The only thing that can upset the rate hike cycle (if we still consider 25 basis points a year a cycle) is a recession. I normally focus on the labour market, as that tells us about inflationary risks during an expansion, while the precise factors that end the expansion are more eclectic. As I discussed in Section 5.3 of Interest Rate Cycles ("Post-Keynesian Economics and Recessions"), business cycles are typically caused by a reversal of investment.

A year ago, there were good reasons to be worried about private investment. The energy business was forced to retrench, and there was an inventory overhang. I will just comment here on the inventory overhang; for more background, I would recommend this article by Gerard MacDonell.

The top panel of the chart above shows the (annualised) contribution to real GDP growth by private inventories. As one can see, it swings around, adding to the noise of quarterly GDP (which is another reason not to obsess about the quarterly number). The bottom panel is the 4-quarter moving average, which one might hope approximates the contribution to annual growth. (Due to the wacky nature of real GDP calculations, this is certainly not the way to calculate that contribution exactly.)

The average fell to -0.6% in the second quarter of 2016, which is somewhat extreme for an expansion. If inventory growth just reverts to normal positive growth, that will represent a big positive swing in GDP growth arithmetic. In any event, in the absence of some form of sudden stop in the financial markets, inventories are unlikely to represent much of a drag going forward.

I cannot rule out some external factor leading to a sudden drop in confidence, but from a domestic perspective, the U.S. economy looks like it can keep muddling forward.