Canada's Housing Market Hanging In There 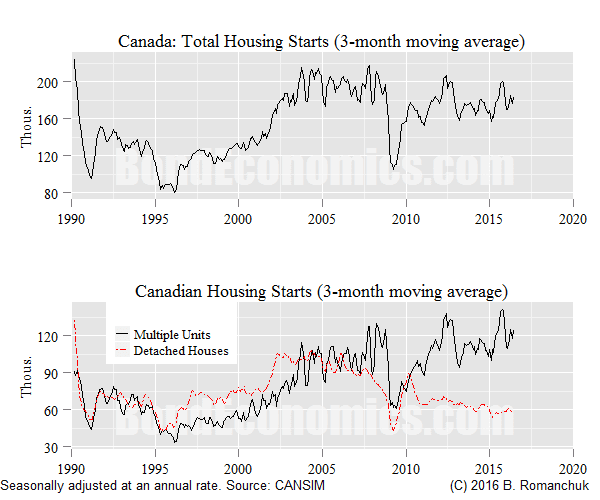 The Canadian housing market has defied predictions of doom for years now. Given the questionable quality of Canadian house price indices, I spend little time pondering the direction in prices. Instead, I believe the focus should be on the income effects of residential construction. These effects are unfortunately overshadowed by discussions of debt and the alleged wealth effect created by home prices. Explaining why the Canadian housing market did not collapse like the American highlights the difficulties with mathematical economic models.

The chart above summarises key dynamics of the Canadian housing market. Before the Financial Crisis, total housing starts were running at an annual pace of around 200,000 units, evenly split between single family and multi-unit dwellings. The Financial Crisis blew a hole in the housing market, but it has since resumed a fairly steady pace close to 175,000 units. (This roughly meets demographic growth needs,)

The mix of construction is quite different, however. Very few people can afford to buy detached dwellings (single family homes) at current prices, and so new construction is mainly focused on condominiums. By making use of the magic of shrinking the condo unit size, people are still able to buy them.

This represents a drop in the standard of living of Canadians, but this could be viewed as a sustainable "equilibrium." There appear to be pockets of speculation in condos (allegedly fuelled by offshore money), but that has been true for quite some time. Relative to the small Canadian population, the global supply of greater fools is quite large, so it is entirely possible that speculation could be sustained for a long time.


What Could Go Wrong?

I have been bearish on the Canadian economy (and housing) for years. Although the economy has avoided a meltdown, it is in pretty rough shape; a view that has been embedded in Canadian bond yields for some time now. (One of the stranger worries facing the housing market was that the Bank of Canada would rapidly hike rates, causing a housing crash. The Bank was very well aware of what happened in the United States, and was never going to blindly hike rates in order to fulfil peoples' fantasies about bond bear markets.) 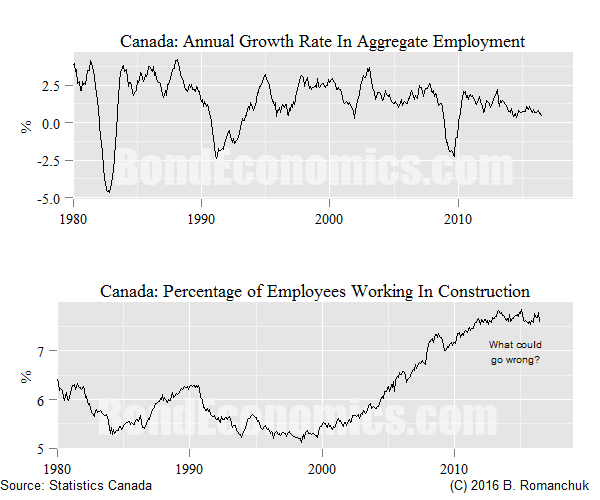 Canada is stuck in a muddle through "equilibrium," but things could easily go very wrong. As the top panel in the chart above shows, employment growth has been extremely weak after the initial post-crisis bounce. Furthermore, the percentage of the population employed in the Construction sector is near modern records. Any retracement of housing starts would have an outsized effect upon the labour market, potentially creating a vicious feedback loop.

I first noted this in articles in 2013 (here and here). Although I am tempted to argue that the passage of time has reduced the risk, the reality remains that the absence of strong growth in nominal incomes means that the situation is not really improving. Debt-to-income ratios remain elevated, and housing affordability is still terrible. (By historical Canadian standards; Canadian house prices were relatively cheap when compared to places like the United Kingdom.)

That said, if the United States economy continues to grow, the Canadian economy may perk up, which would reduce the strain on household finances. The current muddling through of the Canadian economy is allowing time for this to occur. Unfortunately, it also increases the odds that the global economy will succumb to another recession.

The debate about mathematical models, and the heterodox/mainstream squabbling, erupted yet again last week. (This Noahpinion article summarises the debate.) Since I was driving across Northern Ontario at the time, I was not really able to get involved at the time. Although interesting to me, this is really just a squabble about academic politics. For some us, that is fun to watch, but the usefulness is debatable.

My view is that Noah Smith is just following the mainstream academic economist party line, and is missing the implications of the post-Keynesian critiques. Although mathematical models are nice, we have fundamental reasons to believe that they cannot be used in forecasting in the ways that are normally attempted. (Once I get my next book on money out of the way, one of the next projects could be a more advanced discussion of business cycles from a post-Keynesian perspective. That book would give a more formal justification of those remarks.)

The Canadian housing market is a wonderful example. If you look at the macro indicators that are normally discussed (household debt/income, for example), there was not a lot of difference between the American situation than the American. That is, all of the inputs into a generic "housing crisis model" (that we could plausibly deal with) are almost identical.

One could attempt to hide behind probability -- the American housing market melted down because of bad luck (an "exogenous random shock" in mainstream jargon). Although that sounds sophisticated (stochastic calculus!) it is actually useless from a practical standpoint. The number of housing crashes makes it impossible to calibrate such a model, and so there is no way of falsifying it. It just sounds good, but offers absolutely no guidance for forecasting or policy purposes ("The housing market could crash at any time, for unforecastable reasons!" cannot be construed as useful information.)

In any event, the likely explanation lies in institutional differences. Canadian residential mortgages (with low down payments) have to be guaranteed, and the bulk of the guarantees are issued by the CMHC. Unlike the cloudy "guarantees" for Freddie Mac and Fannie (which were ultimately not guaranteed), CMHC is a full faith and credit obligation of the Canadian Federal Government. This backstop prevented the global financial panic from taking down any of the big Canadian banks (although there were some stealth bailouts). With the banking system integrity guaranteed, mortgage lending could resume, and the housing market could recover.

Noah Smith looked down at Minsky's analysis for being qualitative. (However, this unfair to Minsky -- he did develop some Keynesian mathematical models, it's just that they are less well known.) However, whether we need to take into account a credit guarantee within a macroeconomic model is precisely the sort of qualitative information we need, and which Minsky emphasised. You could try to adapt a mathematical model to incorporate the effect of the guarantee, but you first needed to know that it existed, and that it needs to be taken into account. Furthermore, would analysts have distinguished the implicit "guarantee" of Fannie and Freddie versus the explicit guarantee of CMHC before 2008? (That is, it is obviously easy to do so in hindsight, but was this well known in real time?)

I will assert that from a post-Keynesian perspective, the future trajectory is clouded in uncertainty, and we cannot rigorously determine a probability distribution of future outcomes. I have not seen any mainstream models that provides any information that is more useful than that assessment.