The Calculus Of Crisis 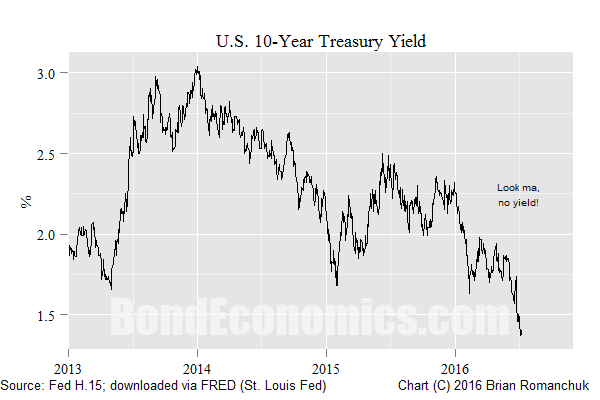 The last remaining drops of yield  are being wrung out of the global government bond market while bears run amok. Although the adage "He who panics first, wins!" must be kept in mind, it is still not obvious whether or not this a re-run of previous summer silly seasons in financial markets.

Since I am not able to give financial advice, I will keep these remarks brief. I just want to lay out how investors should weigh various risk scenarios, without suggesting what outcome to expect.


What Is Going On?

It is clear that most people would prefer to read about what is going to happen in the future, but I believe that there is value in just trying to present clearly what is happening now. Although anyone whose porfolios are being torpedoed might not want to hear this, it is still unclear that anything is happening that cannot be cleared up by yet another wave of asset purchases by central banks.

The Australian MMT academic Bill Mitchell has a good explanation of what is the main driver for the crisis -- the condition of Italian banks. As he notes, there are those who are trying to pin the blame for recent market turbulence on the U.K. "Brexit" vote. Seriously? If there are problems with Italian banks, they were the result of lending decisions entered into a long time ahead of the referendum vote.

I have been trained to ignore literary narratives about what "caused" an unstable system to blow up. If the control designs leave an engineering system in an unstable configuration, we know that it is almost certain that the system will fail -- the narrative of the final chain of events is just misleading trivia. The reality is that the euro is horribly designed, and the current structure is doomed to fail. (That does not mean that the euro must necessarily perish, one could imagine an intelligent redesign. One could also imagine winning the lottery.)

There are three highly visible big bad events that could hit global markets. (Do not get me wrong; I am generally bearish on the prospects for industrial civilisation, so I can imagine a lot more risks than just these three.)

The first two are obviously associated with the euro, but given the huge weight of European banks in derivative speculation, even #3 would likely result in the European banking system cratering.

Although one could attempt to paint the weakness in risk assets as being the forerunner to at least one of these scenarios, we could also paint them as being the result of bears hitting thin summer markets. Until there are some sizeable defaults that force entities to take permanent writedowns on assets, paper losses remain purely notional for any entities (like banks) that are not extremely sensitive to mark-to-market effects. Massive purchases of risky assets by the ECB (for example) can easily turn the tables on anyone whose investment thesis relies solely upon mark-to-market stampeding.

Unfortunately, propping up the prices of liquid assets only helps the liquidity management position of banks. It is not enough to deal with balance sheet losses on illiquid loan portfolios. I admit that I know almost nothing about the details of peripheral banking system loan books, but standard top-down analysis tells me that they cannot look too pretty if nominal income continues to be ground down by incompetent policy. Unless there is a growth miracle elsewhere that is big enough to drag along Europe, or there is a miraculous outbreak of common sense amongst European policymakers, all that we can expect is for the ECB to keep the mark-to-market effects stable enough that contagion is avoided. Zombie banking systems can limp along for decades, so there is no reason to assume that things have to be resolved this summer. Many market participants tend to place too much importance on short-term market-to-market swings.

In other words, this is going to repeat every summer, just with new catalysts to explain the swoon in risk assets.

As shown in the chart at the top of this article, whatever yield that remained in the U.S. Treasury curve is disappearing. Although I am not bullish about the American and Canadian economies (particularly the Canadian), hopping in front of that freight train may not allow you to relax your mind so that you can enjoy some light summer reading.

If the ECB does manage to stabilise the financial markets, the American economy is not in that bad a shape. If animal spirits revive, the hawks will start talking up the possibility of another December rate hike. However, they will probably be a short leash at least until after Labour Day. I had a long history of being a secular bond bull (or stopped clock, if you are a bond bear), but even I find this latest repricing somewhat puzzling.