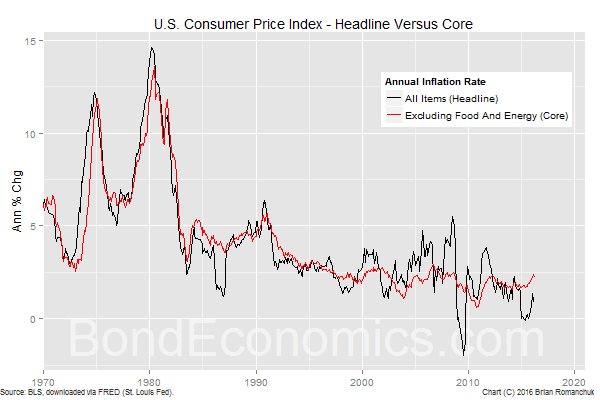 The distinction between headline and core inflation is commonly made in market and economic commentary. This primer briefly introduces these concepts, and why they are used.

Analysts often refer to "core" measures of inflation in different countries; the exact definition can vary. This article will use the American definition.
The chart above shows the annual inflation rate for the core and headline CPI inflation rates for the United States since 1970. In the early years of the period, the two measures were high and tracked each other. In the post-1990 period, we see that core inflation has been fairly stable, while the headline inflation rate has swung both above and below the core (mainly the result of gasoline prices).


Why Use Core Inflation?

The justification for the modern use of core inflation is that it is less volatile, and captures the underlying trend in prices. 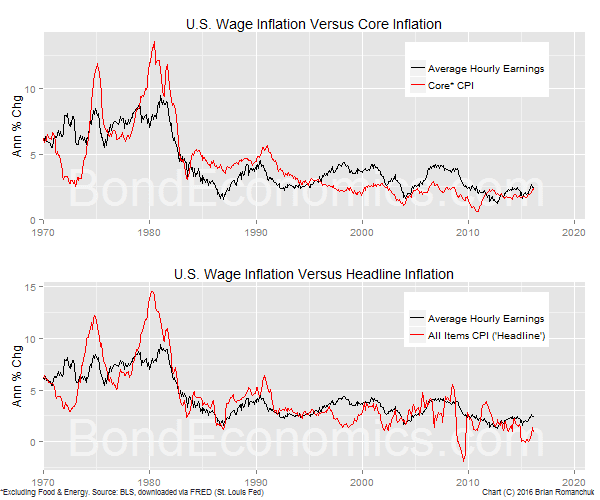 The chart above compares average hourly earnings in the United States versus core and headline measures of CPI inflation. If we look at the bottom panel (headline inflation) near the Financial Crisis, we see that wage growth was completely decoupled from the wild swings in headline CPI inflation (due to the oil price spike then collapse). Meanwhile, core inflation was more stable, resembling the trend in wages. 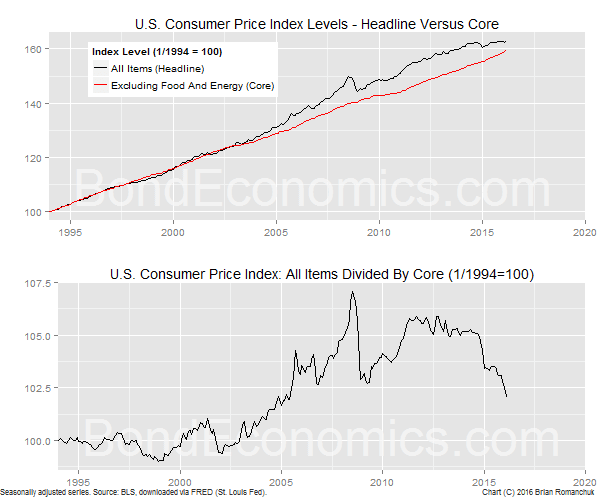 The chart above indicates that the two measures have not greatly diverged in the long run. I chopped down the period shown to be the low inflation period of 1994 to present. The secular rise in energy prices since the mid-1990s shows up with the All Items CPI rising by more than the core measure. That said, the total divergence is only 2.5% over the two decades (as shown in the bottom panel; the normalised ratio goes from 100 to 102.5). This is negligible when compared to the absolute change in the price level.

In other words, much of the hysterics about economists ignoring energy and food prices was misplaced. 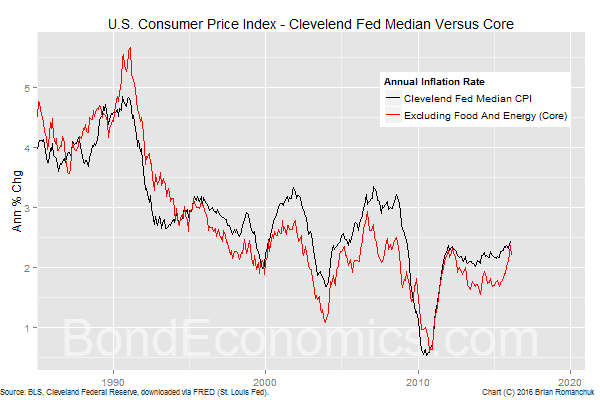 If all we are interested in is reducing the volatility of inflation, it is easy argue that arbitrarily eliminating food and energy from the CPI may not be the best way forward. Economists have studied this issue, and have proposed a statistical means of creating a low volatility inflation trend series -- trimmed mean CPI measures, or the median CPI. The chart above shows the median CPI from the Cleveland Federal Reserve bank. (Note: the series from FRED is a monthly series; I took the annual average to create the equivalent of the annual rate of change series. As long as the rate of inflation is low, the divergence between this approximation and the true annual rate of change is very small.)

(I summarise how these measures are calculated in a short appendix.)

We can decompose inflation forecasting into two steps:
There are a great many economic forecasters who focus on core CPI, so we have a great many methodologies available for the first task. We then need to look at the second task, which mainly depends upon energy prices. (Food prices are increasingly stable, as populations have moved to eat in restaurants and manufactured "food products.")

A trimmed mean CPI does not offer the ability to make such an analytical decomposition. As a result, I have deeply studied the literature discussing those measures.

The calculations for a trimmed mean and median CPI are fairly straightforward, but the difficulty with them is that they are based on weighted averages. (All of the groupings in the CPI basket have different weights, based on consumption patterns.) Dealing with the weightings makes the calculations look more complicated than they really are.

Within a trimmed mean CPI, the monthly inflation rate for the index is calculated as follows.

In both cases, we may need to "split" a grouping in order to do the calculation. For example, if we are calculating a 16% trimmed mean CPI, and the grouping with the least percentage change has a weighting of 20%, we would include that group within the mean calculation, but with a (non-normalised) weight of 4% -- that is, we lopped off 16% of the 20% of that group.