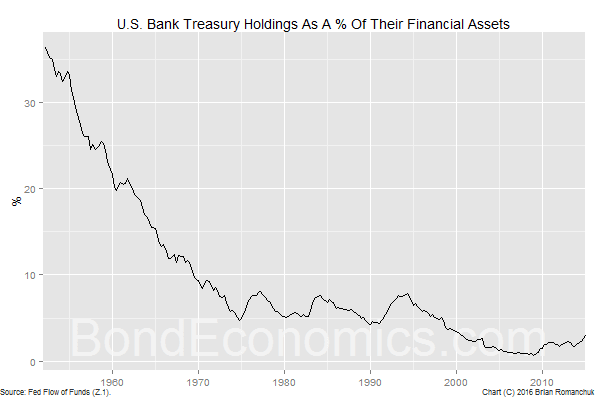 Trade-offs are an important part of decision making. If make a change to improve some metric, it is usually at the cost of something else. We have enthroned mark-to-market as a core principle of finance, and we are now seeing what the costs are. If those market prices do not turn around, the only way out is "qualitative easing."
There are two principal ways of organising finance in a modern capitalist economy.

The disadvantage of bank finance is that over-exuberant pro-cyclical lending creates the well-known problem of zombie banks. Since bank balance sheets are opaque, there is little confidence in them, and the banks slowly liquidate problematic borrowers.

Market-based finance is based around transparent pricing and the a priori belief in the effectiveness of market clearing. Zombie financial intermediaries are supposed to be quickly swept away by transparency.

Developed world policy makers spent the 1980s and early 1990s dealing with zombie banking systems. Transparent mark-to-market accounting appeared to solve their problems. Unfortunately, they are discovering the down side of the trade-off. Is the explosion in credit spreads the sign of actual problems, or are they just a positive feedback loop within the financial markets? Players with weaker hands are being forced out of their positions, lowering risk asset prices, and then putting the next player in line under pressure. None of this is showing up in U.S. economic data yet; it will only show up when it is too late. However, if the markets reverse course, the positive feedback loop will push risk asset prices in the other direction, and worries about the banking system will look completely unfounded. The beauty of opaque bank loan books is that they only need to be written down when someone actually defaults, and not based on whether some hedge fund trade book blows up.

Although Edward Prescott claims that RBC theory has been a success (disclaimer: I have not read this working paper yet, it looks like an interesting read, but I doubt that I will agree with his conclusions) modern macro theory has been spectacularly useless for answering such questions. Providing answers for them is the only thing that matters for monetary policy right now.

If credit spreads continue to widen, central banks will have no choice but to once again engage in "qualitative easing" (buying or lending against private sector assets) in order to put a floor under risk asset prices. This is an old school response, lifted from texts on central banking published more than a hundred years ago. (I see no alternative, given the aversion to fiscal easing, and negative interest rates are making the problems within the financial system worse.)

I suspect many central banks wish that banks still carried massive buffers of government bonds to shore up liquidity concerns, as was the case in the 1950s (chart at top of the article). Those massive Treasury holdings contributed to the financial stability of the 1950s, which created the illusion that Monetarism works (RBC theory being a step-child of Monetarism). As a detached observer with a morbid sense of humour, I find it quite entertaining that fiscal conservatives argued that reducing government debt levels would lower the risk of crisis.