Why The Fed Should Ignore The Stock Market 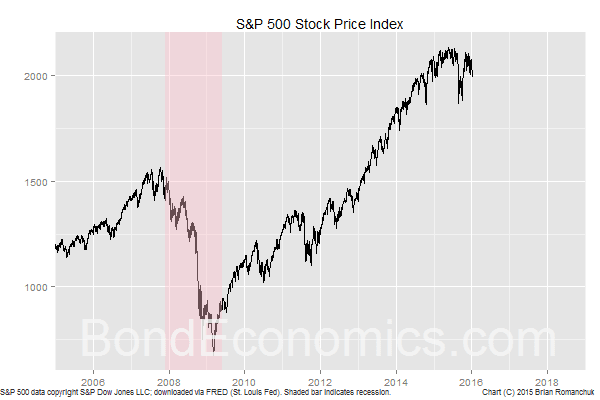 The headlines are blaring that the stock market has had the worst start to a year since practically forever, and the "Markets in Turmoil" specials are filling the airwaves. It is entirely possible that the sell-off reflects underlying risks to the global economy, but as I argue here, whatever is happening in the stock market is not adding any new information. In particular, the best course of action of the Fed is to ignore the panic, and the same holds for fixed income investors and macro-economists.


The arguments to be deeply concerned about the U.S. economy are straightforward.

Why The Fed Should Not Care

However, the Fed has boxed itself in. Current projections imply rate hikes of about 100 basis points a year, which corresponds to a 25 basis point hike every second meeting. They could skip the next meeting, and be consistent with this path. Unfortunately, they did not announce a strategy of hiking every second meeting, and so if they skip the upcoming meeting, people will interpret this as the Fed panicking.

Once again, the Fed should have not listened to the academics that told them that transparency was good; if they kept their mouths shut, nobody would be in a position to care about 0.25% movements of interest rates.

The bond market should follow their expectations for the Fed, and also ignore the latest news flow out of risk markets (beyond the credit markets). If you think the shock to the commodity sector is big enough to drive the economy into recession, you should have already positioned yourself for lower interest rates a few months ago. If you don't think it is enough, you probably should be thinking that bond yields will be stuck in a trading range, and the lower end of that range will be reached sooner or later.

As for my view, I do not have enough information to make a recession call. Regular readers will have realised that I have a "glass half empty" world view, and that I do not see any fundamental reason for a rate hike. However, I have enough faith in the "automatic stabilisers" within the economy that I see the current events just being another wiggle in the trajectory of sloppy growth that we have experienced since the end of the recession. The situation for other countries is more complicated; it depends how exposed they are to the global commodity recession.

Whither The Yield Curve? 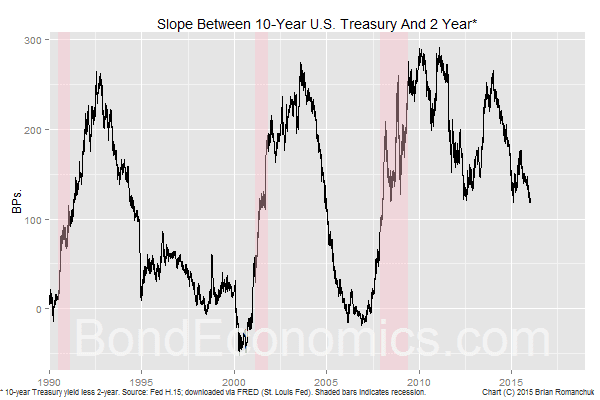 Finally, I have run across a fair amount of discussion regarding the message of the "yield curve" -- for example, the slope between the 2-year and 10-year Treasury. I doubt that there is a message.