Canadian Bonds, The Currency, And Cauliflower 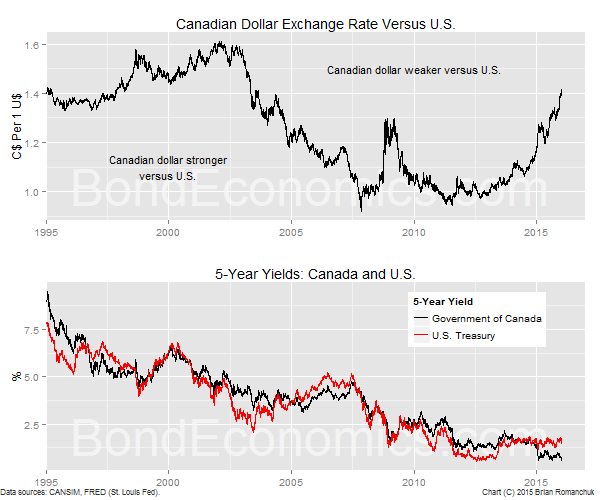 Government of Canada bond yields have recently hit (modern) record lows. This is the "pain trade" for most Canadian asset allocators, as this is magnifying their actuarial liabilities, while the consensus underweight of bonds is hurting performance. The outperformance of Canadian bonds also flies in the face of the common wisdom that a collapsing currency is bad for bond markets and somehow limits policy options. Despite the alleged panic of Canadian consumers about the high price of food, the impact of the weaker dollar has been relatively modest (unless you crave cauliflower).

[UPDATE 2016-01-20] The Bank of Canada kept rates on hold today, which apparently surprised some people (the Canadian dollar strengthened on the news). At this point, the BoC has luxury of waiting to see what will happen, and so I do not think they will do anything until there is some decisive hard economic data that justifies further cuts.


The Canadian economy has been diverging somewhat from trends across the border, but the Canadian outlook would darken even further if the United States economy falls into recession.

Although the hard data so far has not been consistent with a U.S. recession, the latest batch of reports were not particularly buoyant. It is not particularly surprising that the Nonfarm Payrolls number has been unaffected (keeping in mind the limitations of that measure), as the labour market is a coincident indicator of economy. Payrolls will only fall once the economy is already in recession, and that signal will delayed by data lags and the defective nature of its construction. (Some of the job growth in any month is a model estimate of net job creation outside of the sample; those model estimates will be too high during recessionary conditions. No, I have no idea why Street economists focus on that number.)

The decision by the Fed to hike rates now looks even more questionable than it appeared at the time. They hiked rates on the premise that there was a danger of the economy overheating "soon," and that the ongoing meltdown in the commodity markets would have no negative impact on the U.S. economy. All the FOMC can do now is pretend that everything is hunky dory, even though risk markets are now getting smashed on an almost daily basis. They cannot hint of a potential policy ease to counteract these strains, as that would confirm that they had no idea what they were doing when they raised rates just a month ago. This paralysis south of the border is not going to be helpful for already shaky Canadian business confidence.


Currency Moves - So What?

The drop in oil prices has crippled the Canadian dollar. The strategy of ramping up production of extremely expensive oil from the tar sands, in a landlocked location that is cut off from world oil markets has not turned out particularly well. This has impaired the value of Canadian financial assets, and so investor flows have moved against the Canadian dollar. (In my view, the relative attractiveness of Canadian financial assets has been more important for the currency valuation than the trade effect of falling oil prices.)

The Canadian dollar hit a value of $0.98 in 2013 (that is, 1 USD = 0.98 CAD, or a Canadian dollar is worth more than a U.S. dollar), dropping to $1.4541 on Friday. This is a loss of 32% of purchasing power over a couple of years. Admittedly, it has been an orderly bear market; emerging market currencies can lose a lot more value in very short periods. However, that is still an impressive sell off.

I commonly run across arguments that currency markets can somehow limit policy action (other than for the United States, which is allegedly special because of "reserve currency" status). Supposedly, international bond vigilantes will drive up bond yields as they need to protect the value of their holdings (in foreign currency terms). There are no signs of this whatsoever. Canadian bond yields are plumbing new lows, and Canadian central bankers are dropping hints about rate cuts (to negative levels).

The reason why policy action is not constrained is that the effect on the domestic price level of currency movements are mild. There are a few pockets of price increases, but the broad price level is driven by domestic wages. Other than a few exceptional cases (hockey players,...), workers are paid in Canadian dollars, and so the price level shows considerable inertia. I discuss this further below.

Arguably, the weakness of the Canadian dollar does allow the Bank of Canada to hold off on rate cuts. This is helpful, given the proximity of the zero bound. Until some major players reduce their oil production, very little can help the Albertan economy. However, the bulk of the population (including yours truly) live in the provinces of Ontario and Québec, and the weaker Canadian dollar is extremely helpful for the prospects of manufacturing exporters -- assuming that our main sources of import demand avoid recession. Correspondingly, policymakers at the Bank of Canada are in a much better position than their American counterparts. They did not hike rates in the face of the global commodity meltdown, and they are getting an easing of "financial conditions" via a weaker currency. They just need to drop hints about negative rates every so often to keep the Canadian dollar on its back foot.

That said, the Canadian dollar is probably at a level that would be considered cheap. Although I can sometimes read broad currency trends (for example, I moved the bond portion of my personal portfolio into U.S. Treasurys a few years ago), I do not even attempt to forecast particular currency levels. The only safe thing to say is that the Canadian dollar will eventually make a sharp "V-shaped" turn (probably when oil bottoms). Generally speaking, I think trying to forecast those sharp turns is not a worthwhile investment strategy; it is best to find an alternative market to find a safer way to take a position. (This is arguably easier to do within fixed income; currency traders have to use options, which leaves them fighting elevated implied volatility.)

I read an article this week with a headline along the lines of "Canadians are panicking about food prices!" (If there were Canadians panicking, I was not one of them. Other than cauliflower I had not noticed any particularly unusual vegetable pricing. See this Toronto Star article for a less excitable example -- "Soaring Cauliflower Prices Come To A Head For Restauranteurs". The headline writers at the Toronto Star are definitely better at that job than I am.) Although there are some nuggets of truth in articles about rising Canadian food prices, they do not present a problem for policymakers. 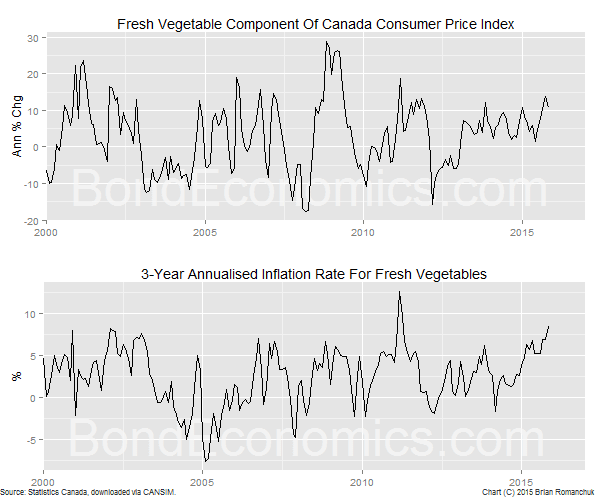 The data from Statistics Canada bear out that fresh vegetable prices are rising; the latest available data is for November, and the annual inflation rate for that component was 10.9% (chart above, top panel). That's a fairly scary level of inflation, but as the chart shows, such a high level of inflation is common for that component. (This is why some economists love to pick statistics out of the air without providing a chart; stripping numbers out of context makes them sound scarier than they are.) However, the bottom panel shows the annualised inflation rate over a 3-year window, and the inflation rate for this component has been running well above the Bank of Canada's 2% inflation target. 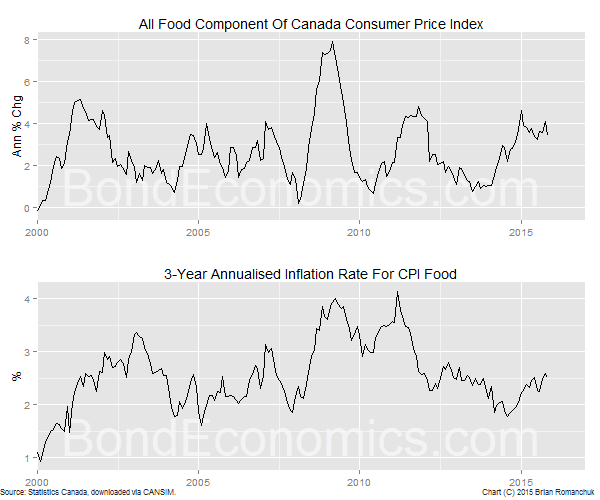 The chart above illustrates why the jump of fresh vegetable prices does not pose a particular problem for policy. The aggregate of all food components of the CPI has been much less affected by the drop in the Canadian dollar, running at a 3.4% annual inflation rate in November. By comparison, the Canadian dollar was depreciating at a 17% annual rate in November. Given that divergence, it is clear that it would be difficult to have any confidence in estimates of the sensitivity of food prices to the value of the currency. Admittedly, some of the stability reflects the fact that Canadian importers probably undertake currency hedging programmes; even if the Canadian dollar stabilises, some price rises will still filter through the pipeline. Nevertheless, the Canadian dollar is not going to keep falling at its current pace for years; it will eventually bounce back, and there will be a corresponding reversal in food price inflation.

As to explain the lack of currency sensitivity, I discussed food inflation in an earlier article. Like other developed countries, food expenditures in Canada are dominated by spending on restaurants and processed food, and prices for such food are dependent upon the cost of labour. (In general, those prices have inflated at a faster rate than less processed foods, which is a consequence of rising incomes.) This is a different situation than is the case for many developing countries; those countries were pushed into producing "cash crops," and they unfortunately import cereals. Furthermore, their diets feature much less processed food. This may be healthier, but this leaves food prices much more exposed to the price of raw foods, Correspondingly, policymakers in such countries do not have the luxury of ignoring food prices.

Canadian yields have hit levels that I always had assumed were reserved for JGBs and perhaps Swiss debt. Since I doubt that the Bank of Canada would resort to negative rates (since the weaker dollar is doing the stimulus work for them), I assume that there is not a whole lot of room left for the secular bond bull market. That said, I doubt that there will be a significant reversal until there is a sign that the global economy is entering a sustained growth phase (and that the Canadian housing market is not weakening).