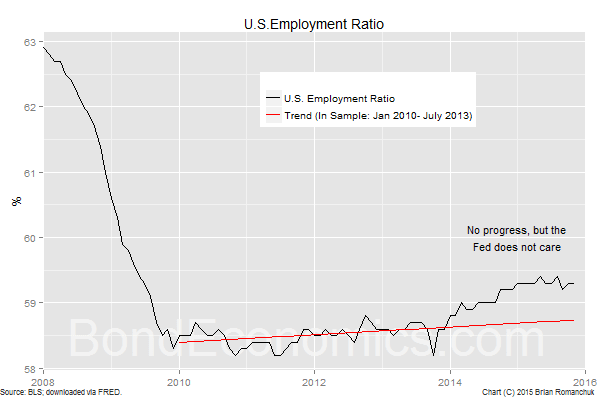 The latest Employment Situation report appears to have been strong enough for Federal Reserve policy makers so as to allow them to fulfil their promise (threat?) to hike in 2015 at their meeting next week. Assuming that they finally pull the trigger, this should cause a certain amount of hysteria, both by market commentators and economists of the doveish persuasion. Although I believe that the U.S. is nowhere near overheating, I do not think that a few rate hikes will make much a difference for the real economy. The markets may react badly, but they react badly to any number of random events, and so this possibility should not be taken too seriously.

The chart above shows my favoured summary of the employment situation in the United States right now -- the employment-to-population ratio. It tells us what percentage of the working age population is working at any given time. Although this ratio was expected to somewhat as the result of an ageing population, it is at a relatively low level, and has not risen at all in 2015. This tells us that jobs are not being created at a fast enough pace to bite into the hefty underemployment that was the result of the financial crisis. (Please note that I have only shown the recent history as I want to focus on the current situation; the level of the employment-to-population ratio has varied as the result of structural changes in the labour market, most notably the entry of women into the labour force.) 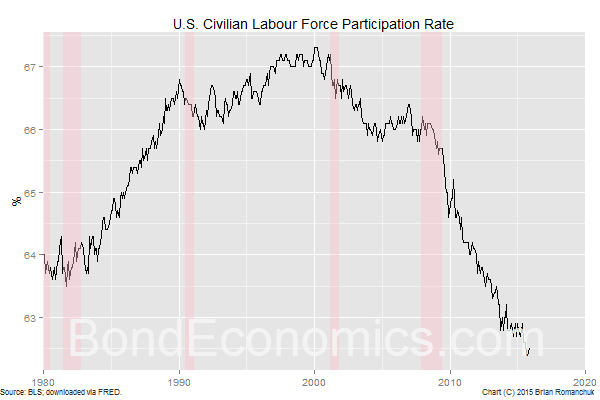 As I noted earlier, there is a debate about the interpretation of these trends. The monetary policy hawks argue that what is happening is the result of an ageing population, and that the Unemployment Rate remains a good measure of the amount of slack in the labour market. With the Unemployment Rate at "only" 5.0%, inflation risks are allegedly around the corner. I disagree with this assessment, but I give a longer discussion in an earlier article -- "The Falling Participation Rate -- A Lack of Jobs, Not Retirement."

With the Fed about to hike, we will now get to participate in the fun task of second-guessing their decision. Since I think that the labour market is still weak, I am biased towards arguing that a rate hike would be a mistake. That said, I am skeptical about the relative importance of interest rates in steering the economy, so I doubt that it will make much of a difference. As a result, I cannot get outraged about this decision. 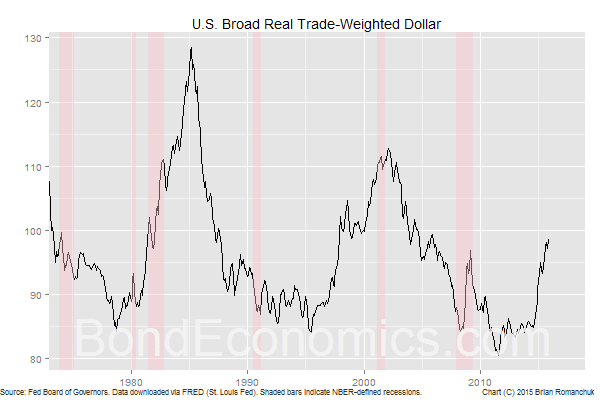 One of the few channels by which interest rate hikes will influence the economy is via the value of the currency. The usual reaction of the currency market is to increase the value of a currency for which the central bank is raising rates relative to its foreign counterparts (although there are no hard rules). The chart above shows the broad trade-weighted U.S. dollar (adjusted for inflation, or "real"). The U.S. dollar has strengthened versus its peers since mid-2014. This is presumably a reaction to the fact that U.S. economy has been relatively strong, and rate hikes more likely.

However, it is unclear whether the currency market has already moved to "price in" the Fed rate hike cycle. If the Fed only hikes rate at a moderate pace, the currency may not strengthen much more. The recent strengthening is not particularly significant when compared to the previous violent cycles of the post-Bretton Woods era. Correspondingly, I do not see much risk from currency appreciation to the economy as the result of rate hikes.

Realistically, the main channel by which a Fed rate hike will influence the economy is via the nebulous concept of "animal spirits." It is exceedingly likely that there will be a burst of hyperactivity within risk asset markets as the result of a rate hike. But once the novelty wears off, I doubt that much will change. Government bond yields are far too low to be acceptable to asset allocators with high return targets, and so it is unlikely that a rate hike will be enough to cause major changes in investor behaviour.