Fixed Investment, Yields, And The Cycle 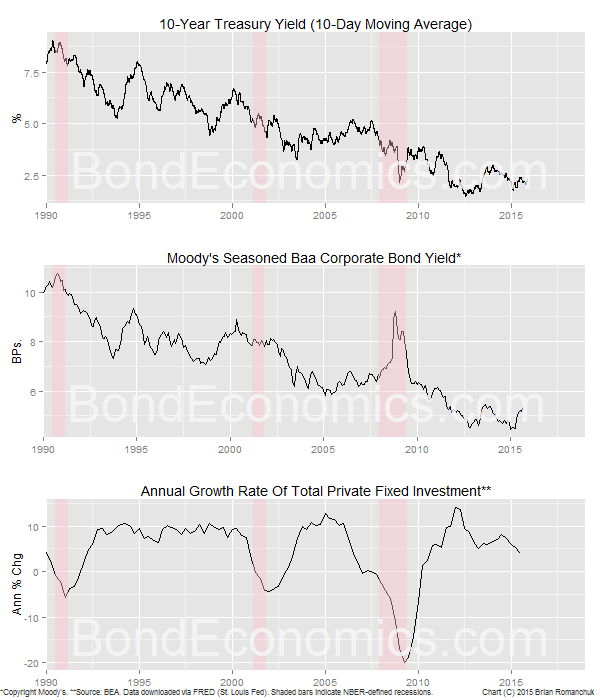 I am slowly moving towards the end of writing an ebook which discusses interest rate cycles. One of the theoretical topics of interest is the relationship between interest rates and fixed investment. Like many other post-Keynesians, I do not feel that interest rates are particularly important for the determination of the level of investment. This article is a brief introduction to this topic, focussing on what we know about the economic cycle.

The chart at the beginning displays the post-1990 experience for the United States. The advantage of looking at this period is that the business cycles were quite long, with many years between recessions. The 1950-1990 period was characterised by short-lived economic cycles (3 years between recessions being typical), and so the time axis of the chart for those periods are compressed relative to now.

I have not adjusted the yields or the investment for inflation, which would be a normal adjustment to make. However, other than the very first few years of the depicted period, inflation rates were relatively stable. If we make a poor choice of the price index, the resulting time series trends may be more misleading than the raw series. This inflation stability was not a feature of the 1970s and 1980s, which was another motivation to start the chart in 1990.

The top panel shows the 10-year Treasury yield (from the Federal Reserve H.15 report). It follows the well-known downward trend; a secular bond bull market which presumably has to end some time soon (unless negative rates become a thing). If we extract that secular trend from the data, the 10-year yield tends to rise during an expansion, and slash lower during a recession. (Note that there was a growth scare as a result of the 1997 Asian Crisis which turned out to have only a limited effect upon the United States economy, which explains the mini-cycle of the late 1990s.) The bond markets are following the reaction function of the policy rate (not shown).

The bottom panel shows the annual growth rate of (nominal) private fixed investment (residential and nonresidential) in the United States. We see that it typically has been steady around 10% during expansions, and dropping markedly going into recessions.

If we compare this to the behaviour of the 10-year Treasury yield, one could easily argue that investment is positively correlated to interest rates: higher interest rates go hand-in-hand with higher investment. This is exactly the opposite of the relationship that is assumed within conventional economic analysis. Trying to do a formal econometric analysis is always going to be difficult: how do we account for the secular bond bull market during this period? The usual assumption in analysis is that markets are efficient, and do not make continuous valuation errors. Although one can debate the meaning of the phrase of "market efficiency," arguing that market pricing is systematically wrong raises a lot of obvious questions, such as: "If you are so smart and know what bond yields should be, why aren't you managing a bond fund?"

To muddy the waters further, the middle panel of the chart shows the yield of corporate bonds rated Baa by Moody's ("Baa" is the equivalent of the "BBB" rating of other rating agencies). During the last recession, the corporate yield went in the opposite direction of government yields (as the result of extremely wide credit spreads). Credit spreads normally do widen in recessions, but this was an extreme example. One could possibly salvage the standard relationship (higher yields lower investment) by looking at corporate bond yields rather than government yields. This makes more sense -- the only reason to look at government bond yields is the fact that the central bank determines the risk-free interest rate curve, and economists at the central bank want to come up with models that relate the policy rate to other economic variables.

What Do We Really Know?

When faced with a empirical question like this, academic economists tend to pull statistical tests out of their hats, and "prove" something or other about the relationship between the variables. Of course, different academics will "prove" completely opposed relationships. I have my doubts that following these techniques blindly will accomplish anything. (Unfortunately for those who work in finance and economics, they have to follow these pointless techniques, as they are "best practice.")

The dynamics of a system outweigh statistical tests, which are based on overly simplistic models in which the system dynamics have been absorbed into random variables which are assumed to have an easy to model relationship to each other. (For example, one variable is assumed to lead the other by a certain number of periods, and then we add in normally distributed error terms everywhere.) So the question is: what do we know about the dynamics of the system, and how do they relate the given variables (interest rates and investment)?

If we look at the Kalecki profit equation (Wikipedia link), we see that fixed investment is a major source of corporate profits. Which implies that the more fixed investment there is, the greater corporate profits, which validates the previous decision to invest. This creates the positive feedback loop driving growth in a capitalist economy. A collapse in investment, almost by definition, will create a recession. The business cycle (real GDP growth) does not determine fixed investment, fixed investment is the business cycle. (This does not fit within the prior beliefs of mainstream economists, who use models that say that changes in productivity and the sudden desire to increase leisure hours cause recessions.)

In summary, the relationship between interest rates and investment will depend upon how well central bankers and investors can forecast the future. Since forecast accuracy tends to follow trends (a period of doing well and then a period of errors in the same direction -- technically known as autocorrelation), the statistical relationship should also vary over time. Given the difficulty of modelling the time series of forecast errors, we should not be surprised that it is difficult to find a relationship between investment and interest rates.

Finally, enjoy the rest of the Grey Cup weekend!