Economic Stability And The Size Of Government

In "Fiscal stimulus does not necessarily mean large government", Bill Mitchell dissected a debate whether "if you support austerity it is because you really just want smaller government and vice versa." Professor Mitchell argues that this is incorrect, although I would note one small qualification - the government cannot be too small for fiscal policy to stabilise the economy.

The conclusions of his article are:


I should add that MMT [Modern Monetary Theory - BR] also does not automatically bias one to thinking that government should be relatively large. Small government advocates would be wise to understand MMT principles given they apply to monetary economies irrespective of the size of government.
Some MMT proponents that I know support larger public sector provision, while others support a greater role for the private sector. But we all agree on the way that the monetary system operates and the capacities that the currency-issuer holds in that system to further the well-being of the population.

I think this is the consensus view of the main MMT proponents, as well as myself.

The only qualifier I would add is that the government cannot be too small without there being negative effects on economic stability. My views are based on those of the economist Hyman Minsky. We argued that "big government" stabilised the economy via two channels:

Minsky argued that the severity of the Great Depression (and the earlier depressions of the 1800s) was the result of the small size of the U.S. Federal Government. The growth of the modern welfare state has tended to stabilise the economy. In the essay, "Can 'It' Happen Again?" (republished in a book of the same name), Minsky observed the following (on page 12):

The key is that the passive fiscal stabilisers have to be big enough to overcome changes in aggregate demand coming from the private (and external) sector.

In the section "How Big Should Big Government be?" in Chapter 12 of Stabilizing an Unstable Economy, Minsky argued that the (federal) government would need to be about 20% of GDP in order to offset the volatility in private sector.

That said, the mix of government spending matters for counter-stabilisation. For sectors of the economy which are largely immune to the business cycle (at least in the short run), it does not make a great deal of difference whether the firms are run by the government or the private sector. In both cases, employment and investment will be stable, and so it cannot offset volatility in other sectors. As a result, there is little reason to suspect that the changes in the size of government in the post-war era (which largely involved the expansion and decline of government involvement in these sectors) will have a visible effect on economic stability.

As a result, what matters most for stabilisation policies is the size of counter-cyclical transfers, such as unemployment insurance, as well as the effect of income and sales taxes. 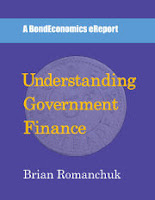 In "Finance and Profits" (page 57 of Can "It" Happen Again?)  Minsky observed:


There is no way that a financial crisis could develop in an economy in which bank protected assets, mainly U.S. Government debt, were 60 percent of total liabilities.

Chapters 3-5 of my new report Understanding Government Finance underline the critical role of government debt in liquidity management within a modern economy with a free-floating currency. Arguably, repurchase agreements ("repos") figure heavily in practice, but a repurchase agreement is just an agreement to buy and sell the underlying security. Government repo trading is just an extension of the cash government bond market; it just sounds exotic because most people are not familiar with it.

During good times, the private sector can switch over to more dubious forms of money substitutes to use in liquidity management, as was the case before 2007. However, government money is still the ultimate form of settlement, and the private sector has no choice but to retreat to use government-issued liquid instruments when the solvency of the private financial infrastructure is questioned.


Reserves Are Not The Answer

The usual assumption is that bank reserves are the liquidity management tool of choice. This in not really the case, at least not from an aggregate point of view.

In the pre-2008 system, excess reserves were typically nearly zero. This implied that banks had to replace any reserves lost that day, since the levels of required reserves were fixed during the reserve maintenance period. The fact that reserves were positive was irrelevant, since the deficiency always had to be made up. This required the banks to also use other instruments to bring back those lost reserves.

In the current system, Fed policymakers have stuffed the banking system with excess reserves - at the cost of reducing the float of Treasurys held outside the Federal government. Since Treasury trading (including repos) is a key liquidity management tool for both the bank and non-bank financial sectors, this policy appears to have broken the liquidity management capabilities of the financial system. It remains to be seen how well the system will deal with the inevitable next crisis.