The Icelandic Sovereign Money System Proposal has increased interest in the possibility of 100% reserve banking. I am quite skeptical about 100% reserve banking, and prefer the Canadian 0% reserve system. That said, I have not looked too deeply at the details of various 100% bank reserve systems, such as the Icelandic proposal. In this article, I will outline what I see as potential problems with such a system.

A high level summary of the key points of a 100%  reserve banking system is:


For more details, I direct the reader to various proponents of 100% reserve banking:

The following articles from supporters of Modern Monetary Theory point out flaws with 100% reserve banking.

I have not had time to study these proposals in detail. I doubt that I would have conclusions much different than Bill Mitchell and Neil Wilson, but I want to keep an open mind on the topic. The rest of this article are high-level issues that I see with the concept, but it may be that these issues are accounted for within these suggested frameworks.

As I explain in the next section, the only way a 100% reserve banking system would make any difference is that non-bank finance ("the shadow banking system") would have to be basically eliminated (other than equity financing).  From what I have seen of these proposals, they have long complaints about the creation of money by banks, but tend to be silent on non-bank finance.

If it was possible to clamp down on bank and non-bank finance, the "financial accelerator" within monetary capitalism would cease to exist. I follow the business cycle views of Hyman Minsky, and it is very clear that debt-financed speculative financing of fixed investment is a major source of economic instability. Since fixed investment is a major source of business sector profits (from the Kalecki Equation), it creates a self-fulfilling upward boom in the economy. Anything that clamps down on that positive feedback loop would stabilise the economy.

Since anything would do the job, the safest approach is to reform the existing system along lines of historical experience, rather than creating a completely untested system.In some cases, radical reforms are needed because there are no historical precedents to provide guidance, but in this case, we have the lessons of the 1950s to examine.

If Non-Bank Finance Exists, It Will Replace Banks

If the non-bank financial sector is allowed to continue operating in a fashion similar to the current environment, it will push the hobbled banking system pretty much out of existence. The banks would have a regulatory and capital burden that would make them completely non-competitive.

The fact that deposits are "sticky" is one of the factors that makes the formal banking system relatively stable. This is implicitly recognised in credit analysis as well as regulatory norms. Being unable to use deposits to finance the banking system eliminates one important stabilising force. 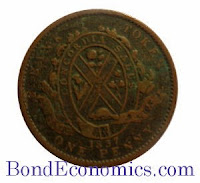 The British North American colonies (which later merged to form Canada in 1867) were somewhat indifferently managed from London. For most of the colonies, there was a continuous shortage of copper money (pennies and half-pennies) which was needed for commerce, and the colonial administrators did little to alleviate this shortage. The private sector took matters into its own hands, and issued copper tokens.

In Lower Canada (which became Québec) had particularly acute shortages, and the quality of tokens declined. In 1837, the banks stopped accepting other tokens (except by weight) and they replaced them with their own tokens. The pictured token on the left is an example, the Québec Bank One Penny/Deux sous "Habitant" bank token*. The banks were literally printing money (or at least tokens), but this was welcomed as it replaced even more dubious forms of money.

This process of the creation of new forms of money is inevitable. If the government attempts to clamp down on the financial sector, non-financial firms will find means to create money substitutes in order to grease the wheels of commerce.

This process of new money creation will be popular and will be allowed to continue. Although someone who inherits wealth can preserve some of it by hoarding money or gold, the reality is that you can only build up riches by pursuing commerce. These rising stars will bend the political environment in such a fashion so as to allow businesses to thrive. Therefore, no matter what rules are on the books, the private sector will find a way to create money, and politicians will ratify those new forms of money during a crisis.

We Have Such Instruments, And We Do Not Use Them (Much)

We already have instruments that act pretty much like 100% reserve banking - Treasury bill money market funds. And for some purposes, they are quite useful. But the reality is that the market share of such funds is not particularly large. The "revealed preference" of investors is that they would rather take risk to earn a small yield spread over the Treasury bill rate. Whether or not this is a good idea is irrelevant; the reality is that any reforms would be fighting against this economic force.

If We Abolish The Non-Bank Financial Sector, Where Do Existing Assets Go?

These assets have to be invested somewhere, and the reality is that these investors have liabilities that can only be matched to fixed income assets. If the non-bank financial sector disappears (outside of government bonds), this creates a serious problem for these entities. Any reforms along these lines would also have to rebuild the entire pension system.

The Non-Guaranteed Parts Of Banks Will Remain That Way

I find the belief that the government will not bail out the non-guaranteed portion of the banking system to be quite amusing. We have decades of experience that shows that governments almost invariably swoop in to bail out the financial system rather than suffer a depression. The latest example during the Financial Crisis was when the U.S. government guaranteed money market funds, which were always marketed as being without a guarantee akin to deposit insurance.

* The habitant is the person on the front side of this token (not shown); this word is the source of the chant "Go Habs Go!" one hears at Montréal Canadians games.