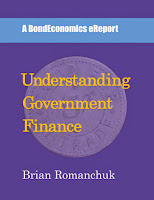 The first BondEconomics eReport: "Understanding Government Finance" is expected to be released for sale in mid-June has been released; details available at its product page.

It provides an introduction to the operations behind government finance, aimed at a non-specialist audience. It will be initially published in ebook formats (epub and Kindle), followed by pdf and paperback editions.

Publication Date: Mid-June 2015. (Depends upon final edits, and time for acceptance by retailers.)

This report examines the underlying principles of government finance for a central government with a free-floating currency.This is done by examining financial operations within a simplified yet realistic monetary framework. Then the effect of deviations from this framework by real world governments are discussed. What is demonstrated is that we cannot compare such a government to a household. Unlike a household, governments are not bound by purely financial constraints, nor is there any need to pay down its debt.

This report is aimed at a relatively wide audience that has an interest in finance and economics. The focus is on the operations behind government finance, and so there is limited discussion of economic theory. However, the analysis is within the tradition of Modern Monetary Theory (MMT), and so it provides an introduction to some of the concepts used within that body of thought.

Link to Product Page.
Posted by Brian Romanchuk at 9:30 AM