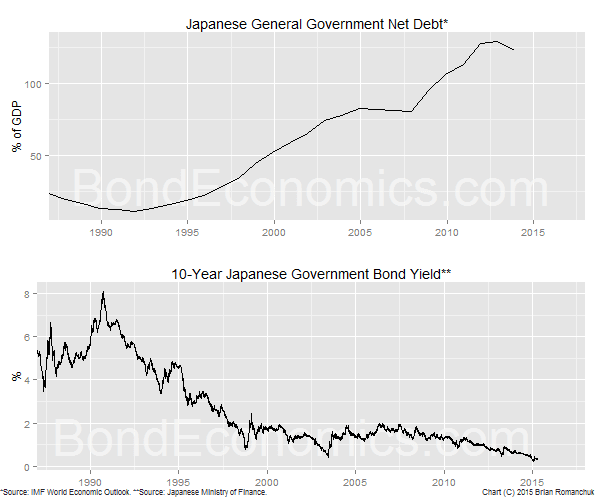 I recently referred to an older article in which I showed how higher debt-to-GDP ratios for the U.S. Federal Government was correlated with lower bond yields. The post-war U.S. experience was not an isolated case; similar relationships hold for the countries with free-floating currencies. The Japanese Government Bond (JGB) market is the poster child for this correlation.


The chart above shows the net debt-to-GDP ratio for the Japanese General Government sector (from the IMF World Economic Outlook database) in the top panel, and the 10-year JGB yield (from the Ministry of Finance) below. Most people who want to hyperventilate about Japanese government debt levels show the gross debt-to-GDP ratio (which is over 200%), but that ignores the fact that the Japanese government has amassed a huge amount of foreign exchange reserves. The net debt figures give a more realistic picture of the situation.

In the earlier chart, I showed a scatter plot for the relationship between debt-to-GDP and bond yields. Just a quick scan of the chart above shows that the negative correlation is present; however the number of data points would be small, and so the scatter plot would be fairly dodgy. The short history of JGB yields is not just a limitation of the source; the Japanese government had low debt levels for most of the post-war era, and did not issue long-term bonds.

One of the popular theories that many want to prove is that increasing the debt-to-GDP ratio will raise bond yields ("all else equal"). Most of these attempts can be summarised as:


An increase in the debt-to-GDP ratio by 1% will increase {bond yields/forward rates/term premia} by x basis points, (where x is determined by regression analysis of some sort).

None of these variants come out looking very good when applied to Japanese data.

Until various European central banks started experimenting with negative rates recently, most analysis factored in the zero bound interest rates. With short rates already at 0%, the future path of short rates is skewed upwards (which I pointed out when JGB yields were at higher levels). Therefore, even though no serious observers expected much in the way of rate hikes from the Bank of Japan, there should have been a reasonable term premium embedded in the 10-year JGB yield. This could easily explain why JGB yields traded between 1-2% during the post-2000 era. (The recent grind lower could be attributed to Quantitative Easing.)

This does not leave a whole lot of room for the alleged increase in term premia caused by debt-to-GDP levels. The Japanese net debt-to-GDP ratio was 52% in 1999, and 113% in 2010, or an increase of 61%. Meanwhile JGB yields broadly traded in a range over that period.

If I return to the relationship I noted above, it is hard to see the value for x even being as high as 1 (that is, a 1% increase in the debt-to-GDP ratio raises the 10-year term premium by 1 basis point), never mind a value that might be statistically significant. For example, if x was 4, that would imply that the term premium rose by over 200 basis points. Since the 10-year yield barely reached the 2% level, such a value seems wholly implausible.

Most other developed countries have broadly similar yield and debt trends as the United States. However, the runs of useful data are often short, as bond markets were often regulated before the 1980s. One could debate how much new information is incorporated by extending the analysis to other countries, given the correlation of yields and macro trends.

The euro area is a bit of an exception, which is what one should expect. Government finance within a currency peg system operates in a quite different fashion than is the case with a free-floating currency.

On the whole, the only safe conclusion is that there is little empirical data to support the theory that increasing government debt ratios raises bond yields (for free-floating currency sovereigns) by anything other than a trivial amount.