U.S. Economy: This Was Not Supposed To Happen 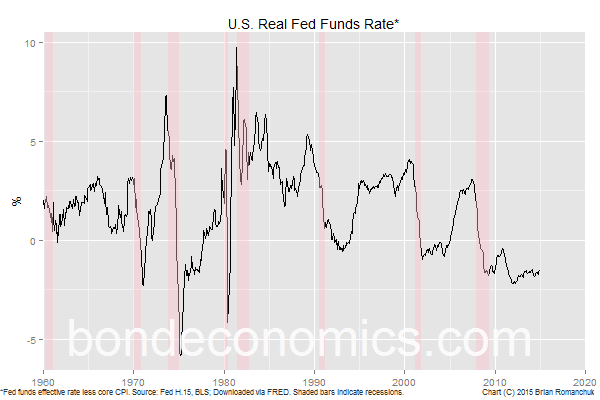 Now that the situation in Greece has calmed down somewhat, we can turn our attention back to the sluggish United States economy. I am not going to attempt to parse Fed Chair Yellen's comments, but I would tend to discount the details. My view is that the Fed is analytically rudderless, and they are in the unenviable situation of making policy up as they go along. There are a number of cliffs over which the U.S. economy can tumble, but the base case remains that the Fed may begin to hike rates at some point in 2015. The question is how many rate hikes will occur before the next set of emergency rate cuts will be required.

I believe that it would be safe to say that the bulk of economists and market participants follow some version of a "natural interest rate" theory; the only question is the strength of the version that they follow. Without getting into details, I would categorise these beliefs as follows.


You can make the two versions equivalent by saying that the weak version allows the "natural rate" to be non-unique (that is, a range of values), and it can vary over time. The difference is the uncertainty over the estimated value(s) of the natural rate.

There is a divergence of views amongst the members of the Federal Open Market Committee, but I would argue that they generally have a "New Keynesian" (DSGE) view of the economy, which embeds a strong version of the natural rate theory. Policy differences largely reflect differing estimates of the natural rate, the importance of other factors that do not appear in DSGE models, as well as the preferred "reaction function" to follow.

Market participants are more eclectic, but my experience is that they at least follow the weak version, although they may use a different description. For example, many Austrians often avoid using the term "natural rate" but they often complain how the Fed is holding interest rates at a non-market clearing level. Which is to say, an "unnatural" level.

Post-Keynesian economists are allergic to the term "natural rate", but the weaker version I describe probably captures the majority view. It is only some of the Modern Monetary Theory economists who reject the power of low interest rates to stimulate the economy.**

Returning from theory, the current situation is not happy for the strong version of the natural rate theory, The chart above shows that the United States has been running "unsustainable" negative interest rates for a longer period of time than was the case in the 1970s. Since the conventional view is that earlier, smaller incursion of negative real rates caused the inflationary spiral of the 1970s, there is no way to explain the current lack of economic acceleration.

Adding epicycles to the New Keynesian model in the form of the "Zero Lower Bound" does not help. As various European countries have demonstrated, the true lower bound for the policy rate is somewhere slightly below 0%. Moreover, the "zero bound constraint" only matters if it is believed that nominal rates will be zero "forever". The consensus view, and market pricing, indicates that the policy rate will be quite positive by the end of the year. In other words, this constraint is not active, and does not distort the functioning of a standard New Keynesian model.

What's The Fed Going To Do?

Since the world is not acting in a fashion consistent with the Fed's models, they are stuck. Their instinct is to hike rates, but inflation is low, and falling into recession now would be a disaster in their world view. The U.S. will "have turned Japanese". This fear has kept them on the sidelines.

The best course of action for handicapping the Fed is to assume that they will hike rates, but these hikes could be derailed by a recession. Going the other way, I see little chance of an acceleration of growth, so the skew in scenarios is in one direction. This means that recession-watching is what matters for analysis right now. 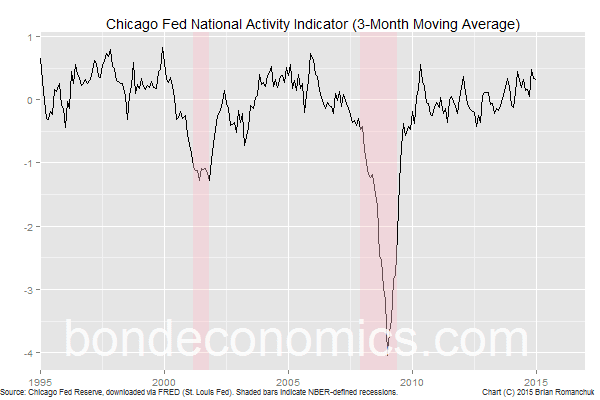 There may be better proprietary indicators, but the Chicago Fed National Activity Indicator is the best public domain aggregate activity measure for the United States economy. It is not showing sign of weakness, despite the collapse in the oil patch. The job and investment losses are localised, and they are buffered by the automatic fiscal stabilisers. 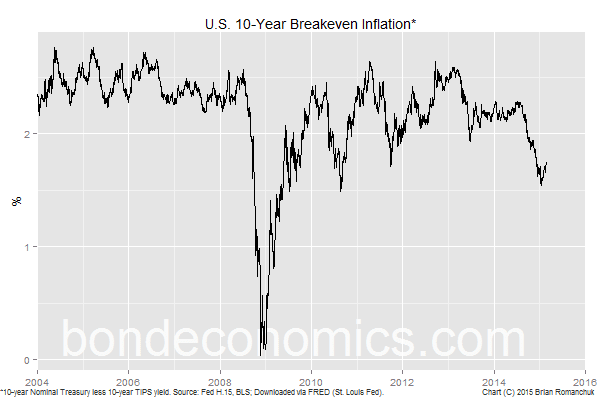 I see no reason to argue with the TIPS market's downbeat view on future inflation. I do not see oil prices taking off any time soon, despite my "Peak Oil" views. Meanwhile, there is considerable slack in the labour market, keeping wage pressure contained.

The external sector will remain a drag on the U.S. economy for quite some time. Everybody has had the bright idea of cutting rates so as to undercut the value of their currencies. This has brought back "King Dollar", and the hope of exporters everywhere to sell their wares to the American consumer. The only other bright spots were China and the resource producers, but they are retrenching. My instinct is that the drag from the foreign sector will not be enough to cause a U.S. recession, but it could help delay rate hikes by a few months.

I may write a longer piece on the euro situation, but what matters from the U.S. perspective is that the euro area policymakers have returned from crisis handling mode back to their normal policy mode. Unfortunately, that normal state of affairs consists of trashing aggregate demand in the periphery. And no, ECB quantitative easing will not help.

As for the "who won the negotiations?" question, my answer is simple: the French-Italian-Spanish bloc. The final deal is exactly what would have happened if negotiators from those three countries alone had to decide the final outcome. My feeling is that historians will view German Finance Minister Wolfgang Schäuble as an incompetent who was out of his depth. His bellicosity may have been popular at home, but he damaged Germany's national interest by weakening its "soft power" in European negotiations. As for the Greeks, since there was no chance of a unilateral euro exit, the deal they got was the best they could hope for now. As was the case for Alberta in the 1930s, the only way to win within a "federated" political regime is for the centre to shift in the direction of the periphery; the periphery cannot win outright.

* A real rate of interest is the quoted interest rate less the rate of inflation, at least for standard interest rate products like the Fed Funds rate, bank rates, or conventional bond yields. There are fixed income instruments that offer inflation compensation, such as TIPS, for which the quoted rate is already some form of a real interest rate.

** Monetarists, both old school and the new "Market Monetarists" follow the dictum of Milton Friedman that you cannot judge the stance of monetary policy by looking at interest rates; you have to look at money growth or something like that. From the perspective of post-Keynesian analysis, this view is a tautology (something that is true by definition, and hence carries no information).