One of the long-running debates in economics revolves around the question whether government debt represents a burden on future generations. This debate shows up in many forms. There are highly technocratic discussions about the “sustainability” of government debt, which is invariably defined by looking at long-term horizons. There is also a great deal of analysis of government policies such as universal pensions – which implicitly or explicitly result in debt issuance – on “inter-generational equity”. And then there are the outright appeals to sentimentality, such as “debt clocks” and tear-jerking stories about the debt that is going to be inherited by future generations. This is the first instalment of a multi-part series on the topic. (Part 2 is here.)

My object here is to look at this concept of a long-term “burden” in a wide-ranging fashion, without being dragged too far in the direction of economic theory. The idea is that once we have an idea of what we want to discuss, we can then use theory to get an idea of how to measure the size of whatever 'burden' exists. (In a previous article, I explain why my bias is not to worry about the long term in the context of fiscal policy; in my view, The Future Is Now.)

In this first part, I look at the more financial aspects of debt burdens, based on the work of Evsey Domar, an economist who rose to prominence during World War II. In the later parts of this article, I will then look at a wider definition of the burden, which is the real economy impact.

For further background on Domar's analysis, his three page 1993 article "On Deficits and Debt" is discussed at Fictional Reserve Barking. In summary, my views appears to parallel his.

Domar And The Financial Aspects Of The Debt Burden 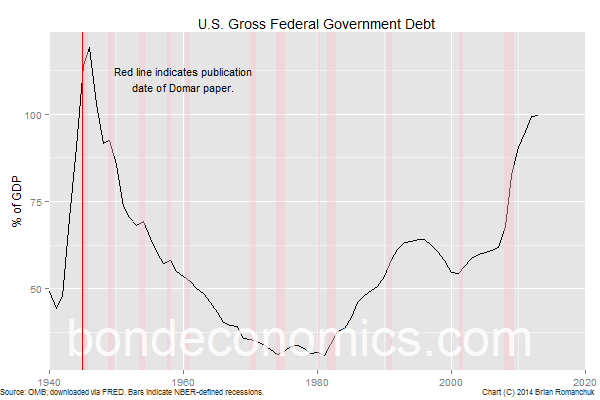 As it became clear that the Allies would be victorious in World War II, thoughts turned to what the economy would look like after the war. One common fear was that once the soldiers were demobilised, the economy would revert to another depression as demand receded. The other worry that hung over observers was the bloated national debt. After the First World War, doctrinaire policy makers followed “sound money” policies in an attempt to restore pre-war economic conditions, and in particular the emphasis was on returning pre-war Gold Standard parities (the exchange rate between gold and a national currency). In the United Kingdom, these policies were unsuccessfully opposed by Keynes. The disasters that resulted from following these policies led ‘Keynesian’ economists to create new doctrines so that those mistakes would not be repeated.

One such economist was the late Evsey Domar, a professor MIT and a Federal Reserve economist. Although he had a long career analysing fiscal policy, I am going to just look at one of his earlier articles: The “Burden of the Debt” and the National Income* . This article was written in 1944, and as the chart above shows, the ratio of Federal (gross) debt outstanding-to-GDP had hit very high levels as a result of war finance. Correspondingly, there was considerable concern about the “burden of the debt”. Within his article, he uses the term “burden” in a narrow technical sense which is sometimes used in economics, which is the financial cost of paying the interest on the debt.

Under unrealistic no-growth conditions, he showed that the taxes imposed to service debt could rise to consume all of national income. Although the situation would not be allowed to deteriorate in such a fashion – something drastic would be done to reduce interest payments eventually – one could infer that debt servicing could become extremely onerous under some conditions. Under a more reasonable working assumption of steady growth, what we see is that interest costs as a percentage of national income would stabilise at some fixed ratio. The faster the growth (relative to interest costs), the lower the debt service as a percentage of national income. Although the situation may not be perfect, it will not get arbitrarily worse. As a result, the key is to focus on growing the national income (the second part of his title). His concluding remarks are still highly relevant (especially when one considers the economic vandalism that is being perpetrated in the euro area):


When post-war fiscal policy is discussed, the public debt and its burden loom in the eyes of many economists and laymen as the greatest obstacle to all good things on earth. The remedy suggested is always the reduction of the absolute size of the debt or at least the prevention of its further growth. If all the people and organizations who work and study, write articles and make speeches, worry and spend sleepless nights – all because of fear of the debt-could forget about it for a while and spend even half their efforts trying to find ways of achieving a growing national income, their contribution to the benefit and welfare of humanity-and to the solution of the debt problem – would be immeasurable.


Too often has it been implicitly assumed that interest on government bonds is necessarily a net addition to other property income, rather than a substitution for other forms of property income; or, in other words, that investment by government, rather than by private business, must increase the magnitude of income going to property owners.


Technical Description Of The Domar Paper


I will now describe the 1944 Domar paper in a bit more detail.

One of the surprises of the paper, when compared to those which might be published by the American Economic Review in the present day, is how understandable and focussed on important problems it is. It is largely text, with a small technical appendix with some undergraduate-level calculus. And it correctly analyses some of the big issues in fiscal policy, which is a marked contrast to the obscurantist modern academic economic literature’s treatment of the topic.

In fact, it is surprising how elementary the analysis is, at least for a modern reader. He notes a lot of potential theoretical complications within the text, but he made a great many simplifications in order to make his simulations understandable. There are two things that have to be kept in mind.

It should be noted that he has a wide definition of ‘government investment’***.


As a matter of fact, the term "investment expenditures" may be misleading, because it is too closely associated with steel and concrete. If healthier people are more productive, expenditure on public health satisfy these requirements. The same holds true for expenditures on education, research, flood control, resource development and so on. Finally, if institutional forces prevent the government from spending money on anything but leaf-raking, it should still absorb the savings unused by private enterprise and spend them on leaf-raking, relying on private investment to raise the efficiency of production, rather than do nothing at all and thus create a shortage of monetary expenditures and unemployment.


He then simulated the evolution of the national debt, with the following assumptions:


Since the modern convention is to judge the stance by the level of the primary deficit (the fiscal deficit minus interest payments), the implications of this formulation may not be immediately obvious. What these assumptions imply is that the overall fiscal deficit is always equals to α times the national income.

He made some other simplifying assumptions. The price level is assumed to be stable. This was a reasonable view in 1944, but modern governments have now gravitated towards running a policy of steady inflation of around 2% a year, even in peacetime. The interest rate – both real and nominal – was assumed to be constant (he denoted it as i). He showed that the ratio of debt to national income asymptotically tends to the value ∝/r, where r  denotes the constant growth rate of national income. Additionally, government interest costs as a percentage of taxable income (which equals the tax rate by his assumption) tends towards 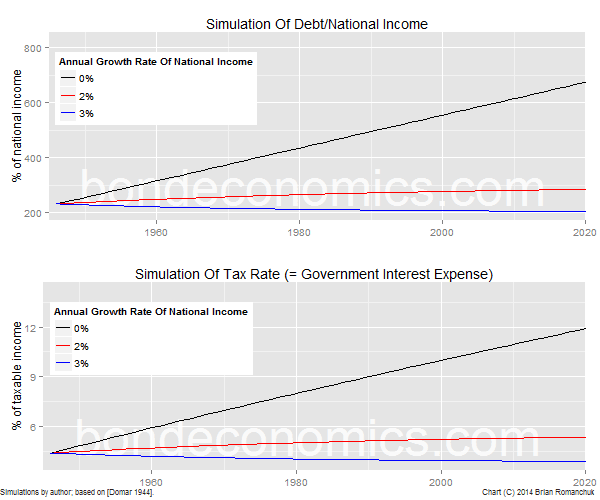 The chart below validates that if we fix the growth rate, but allow the initial debt level to change, the long-term ratios converge towards the same values, which are given by the above equations. (That is, 200% for the debt/national income ratio, and 3.85% for the tax rate.) However, it takes an extremely long time for the series to converge. 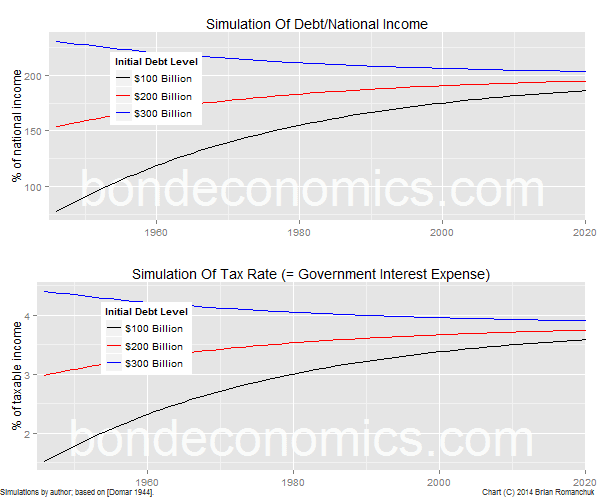 In summary, increasing the growth rate of nominal GDP will tend to lower debt-to-GDP ratios, and for a fixed growth rate, fiscal ratios will converge towards the same steady value regardless of the initial debt level. The interest burden may be affected by increases in interest rates, but higher growth will reduce the relative impact of the fixed coupon interest of already outstanding bonds. Ideally, the higher growth rate is the result of higher real growth, but increasing inflation will also have this effect.

In the next part, I look at the long-term impact of debt on the real economy.  I illustrate it with an example, as the real consequences can vary greatly based upon assumptions.

* The “Burden of the Debt” and the National Income, Evsey D. Domar, The American Economic Review, Vol. 30, #4, December 1944.
** For your edification, here is the 'R' code. If I wanted to use the closed form of the equations, each variable could have been calculated in one line. There is probably a more elegant way of doing this, but I have not been doing too much R coding recently.

*** He echoes Keynes' comments about burying money in bottles in abandoned mines, although leaf-raking does appear to appear to add more value. 'Sound money' economists are never going to be happy reading Keynesian analysis.