The New York Federal Reserve has published the Dynamic Stochastic General Equilibrium (DSGE) model it uses to produce forecasts, in a staff report, and a 5-part series on the Liberty Street Economics blog. It provides an introduction to a modern DSGE model. The analysis they provide of the behaviour of the model during the financial crisis illustrates the inherent weakness of the DSGE modelling assumptions, as the effect of fiscal policy is assumed out of existence, and too much importance is attached to Total Factor Productivity (TFP) shocks.


The researchers at the New York Fed have made public the forecasts of their DSGE model, which are available since 2010. (The current version of the model was presumably changed as a result of the financial crisis.) The model is described in detail in the previously linked working paper, it was authored by Marco Del Negro, Stefano Eusepi, Marc Giannoni, Argia Sbordone, Andrea Tambalotti, Matthew Cocci, Raiden Hasegawa, and M. Henry Linder. That staff paper is fairly technical, and there is a series of 5 blog posts which gives a less formal introduction (link to the first post; you can step through the articles).

The researchers at the New York Fed recognise that DSGE models have limitations, and they discuss some of the criticisms. They concluded the first article with:

DSGE models in general and the FRBNY model in particular have huge margins for improvement. The list of flaws is long, ranging from the lack of heterogeneity (the models assume a representative household) to the crude representation of financial markets (the models have no term premia). Nevertheless, we are sticking our necks out and showing our forecasts, not because we think we have a “good” model of the economy, but because we want to have a public record of the model’s successes and failures. In doing so, we can learn from both our past performance and readers’ criticism. The model is a work in progress. Hopefully, it can be improved over time, guided by current economic and policy questions and benefiting from developments in economic theory and econometric tools.

They discuss the forecasting record since 2010. On a very short horizon ("nowcasting"), DSGE models underperform consensus economics forecasts. But on longer horizons, they do better. With regard to the New York Fed model in particular, it had (correctly) forecast a more sluggish recovery than the consensus since 2010.


I may return to other discuss other aspects of this model later, but I want to just look at one topic of interest here. In the third part of their blog articles, Developing a Narrative: The Great Recession and Its Aftermath, they analyse the causes of the "Great Recession".

Their model allows for a wide number of disturbances, or "shocks" to the economy. But four types of shocks are found to be dominant:


They summarise the beginning of the Great Recession as follows:

The first feature of this decomposition that we want to highlight is the paramount importance of spread shocks (in purple) during the recession. Starting at the end of 2007, the economy experiences a sequence of large shocks to credit spreads, driven by an increase in the perceived riskiness of borrowers. (...) These abrupt increases in the cost of credit account for a decline in quarterly GDP growth of more than 5 percentage points (annualized), which is about half of the total drop in output growth at the nadir of the recession. (...)
The other half of the decline in GDP growth in 2008 stems from significant declines in TFP (the red bars). As we already pointed out, TFP shocks have permanent effects on the productive capacity of the economy in our framework, suggesting that the recession caused some lasting damage. However, the negative shocks of 2008 are followed by positive shocks, with the red bars primarily contributing to GDP growth. As a result, the level of TFP, and hence of potential output in our model, emerges largely unscathed at the present time.

The text refers to the bars in the above diagram; the red bars are the Total Factor Productivity shocks, and the purple bars are the credit spread shocks. I will focus on these two shocks.

As I noted in an earlier post, the effect of fiscal policy is assumed out of existence. In Section 2.2, the authors note:


Fiscal policy is fully Ricardian so that the timing of taxes does not affect the equilibrium.

The effect of this assumption is that the fiscal automatic stabilisers are embedded into the model of the economy (made endogenous, in economist-speak). As a result, the economy appears to be stable, and it is just temporarily knocked away from equilibrium by random "shocks".

Credit Shock - Reasonable, But Not Too Useful


The credit shock appears reasonable - the lockdown of the credit markets will have eventually been damaging for growth. The problem I see is that the credit markets shut down for a reason, and that is because borrowers became over-extended. Slowing growth made debt service very difficult for many. As a result, the credit weakness was at least partially a consequence of slow growth,

Anyone who follows in the tradition of Hyman Minsky cannot view the seizure of credit markets as "random"; it was an inevitable consequence of widespread Ponzi finance.

Total Factor Productivity Shock - What It Is


Total Factor Productivity (TFP) has a long, complicated name, but it is viewed as important within economics. It has a long name as it has to be distinguished from the more common term productivity.

The key distinction is that we can raise productivity by adding capital ("capital deepening" is the popular description). That is, giving gardeners roto-tillers instead of shovels. By increasing TFP, it is possible to increase the efficiency of utilisation of labour and capital. Increasing TFP is generally associated with technology and technique improvements over time, and it is often treated as the only "free lunch" in economics.

But there is a catch. Total Factor Productivity is only a safe concept to look at in the long term. Its cyclical behaviour is less obvious.

If all workers were line employees for manufacturers, its use would probably be safe. (The form of the production function used in DSGE models is largely equivalent to this situation.)  Even if business sector sales are down, output would be unaffected, all that would happen is that businesses would have an unplanned rise in inventories. Since rising inventories are a form of investment within GDP, this means that measured output is not affected by falling demand. Total factor productivity would not be changed. 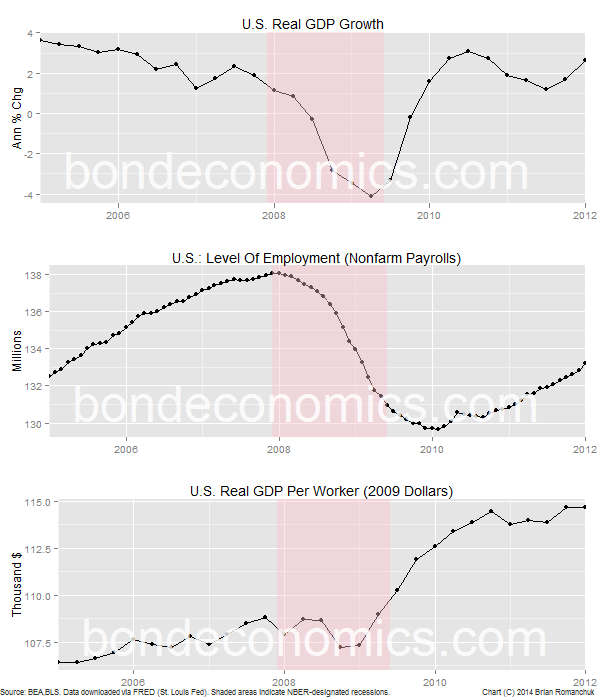 This analysis shows up in the data. The chart above shows a proxy for productivity - real GDP per worker. (Since the size of the capital stock changes fairly slowly, the difference between Total Factor Productivity and productivity is limited in the short term.) As the recession hit, output fell faster than the number of workers. This dropped the real GDP per worker (that is, productivity) below its previous trend, However, once the C-suite started axing employees, the output-per-worker started rising rapidly, and regained its previous trend.