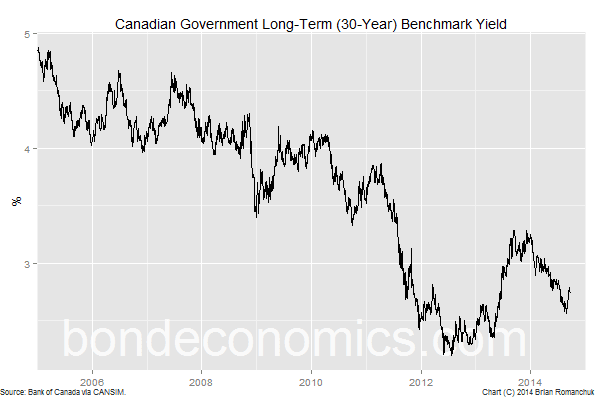 
All told, we think that the neutral rate of interest is lower than it was in the years leading up to the crisis because of these structural developments. We estimate that the real neutral policy rate is currently in the range of 1 to 2 per cent. This translates into a nominal neutral policy rate of 3 to 4 per cent, down from a range of 4 1/2 to 5 1/2 per cent in the period prior to the crisis.

(Note that I did not have a chance to read this speech.)

He then points to the 30-year yield (the latest figure I have from the Bank of Canada is 2.74%), which is well below that neutral estimate. He then states,

I am unsure what is going through the minds of bond market participants. But it is clear that the rate expectations understanding of how bond yields are determined gets fuzzier as the forecast horizon gets long. My view is that expectations work very well out to 10 years, and after that market conventions (and technicals) take over.

One key technical in Canada is the massive demand for long duration assets, to match up against the actuarial needs of retiring baby boomers. The Canadian 30-year has tended to be expensive as a result, particularly versus the U.S. 30-year. (Apparently, actuaries have a lot less clout in the U.S.)

However, market conventions seem to do a good job of explaining where the 30-year is.

(NOTE: Within this article, I am using the "long-term benchmark" series calculated by the Bank of Canada, which I assume is the 30-year. I believe that the maturity used for that series was shorter in earlier eras. It's a bit rough doing relative value analysis when you don't know the maturity of the bond you are dealing with...) 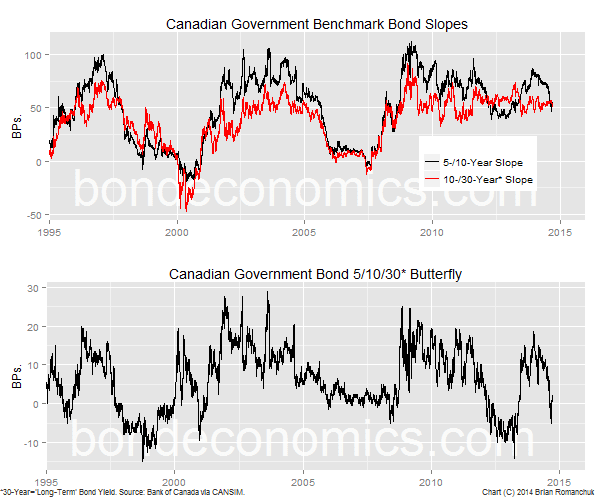 The chart shows that the 5-/10- and the 10-/30- slopes are correlated, which makes reasonable sense (the general tendency of forward rates should be in one direction). The 10-/30-year slope actually tends to be flatter than the 5-/10- slope, even though there is a huge difference in the time difference between the two legs of the trade. (Investors can trade those slopes, and I spent a lot of time looking at charts of slopes during my career.) The implication is that rate renormalisation is expected to happen long before the end of a 10-year forecast horizon.

The bottom panel shows another, overlapping metric - the 5/10/30 butterfly. I define this butterfly as:

(expressed in basis points). (I believe that many traders define the butterfly with the opposite sign; I don't care, as my definition has the property that the butterfly has a positive correlation with slopes.)

Once again, investors trade these butterfly positions, and you can spend a lot of time analysing them. But for my purposes here, I just want to note that the spread is relatively small - it reliably has a magnitude of less than 20 basis points. If you look at the formula above, you see that you can back out the 30-year yield based on the 5- and 10-year yield with only a small error term (the butterfly spread). In other words, the path of rate expectations over the next 10 years (which determines the 5- and 10-year yields) actually does a pretty good job of predicting where the 30-year yield is.

I will leave further analysis as an exercise to the reader. I will be returning to these concepts in later "primer" posts, and I will try to explain them in more detail.