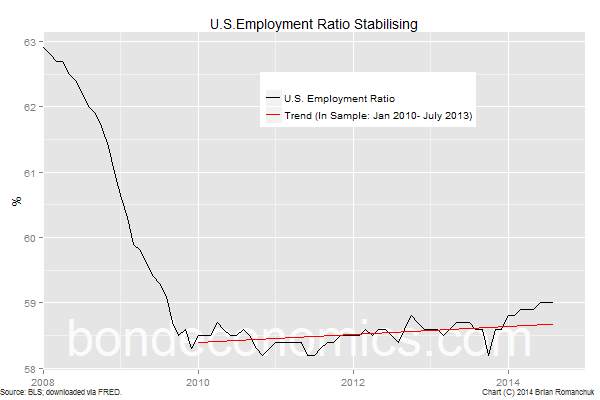 The American and Canadian labour market data for August were released last Friday, and they continued to follow their relatively dismal trends. As always, there was some excitement around the U.S. Nonfarm Payrolls number, which I think can be safely ignored. Although the Canadian and American economies have quite different outlooks - the Canadian housing bubble has not yet popped - there is a continued qualitative convergence in the labour market. In particular, there is weak aggregate job growth, despite allegedly unsustainable loose monetary policy, and a continued rotation towards part-time work. Since the United States already devastated its labour market, things are unlikely to get much worse, but Canada remains far more exposed to another leg down.

As seen above, the surge in the Employment Ratio (having defined down what constitutes a "surge") that started at the end of 2013 has lost steam. The Employment Ratio is now stuck at 59%. Meanwhile, it was 58.5% in January 2010 - a 0.5% improvement in almost five years. Although monetary hawks invoke demographics, that's just whistling past the graveyard. 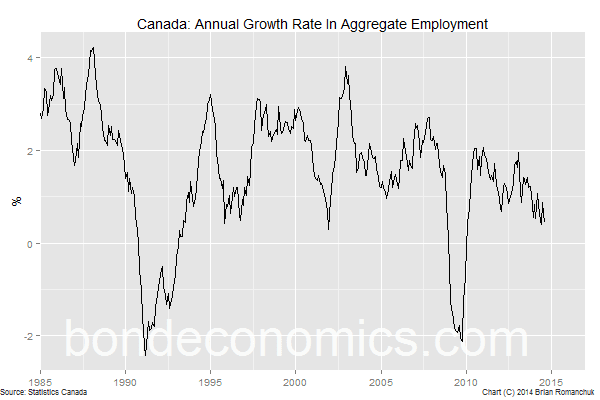 The chart above shows that the picture in Canada is probably worse. Annual aggregate job growth is marching towards 0%, although we may have to wait to see whether the data will again be revised upward due to calculation error. 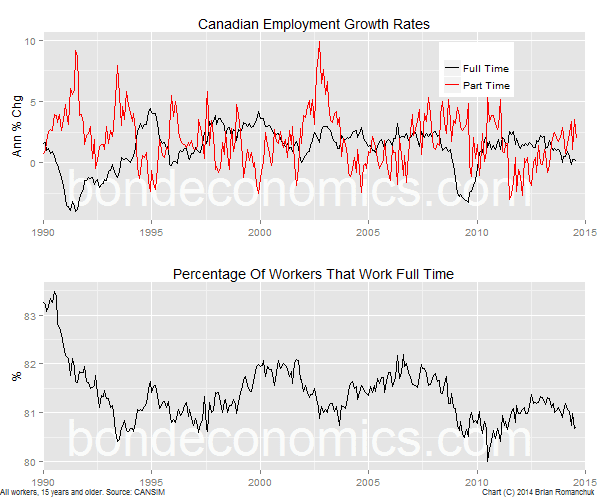 However the job growth that is happening in Canada is part-time work, as shown in the chart above. The bottom panel paints a fairly evocative picture of the state of the business cycle in Canada. 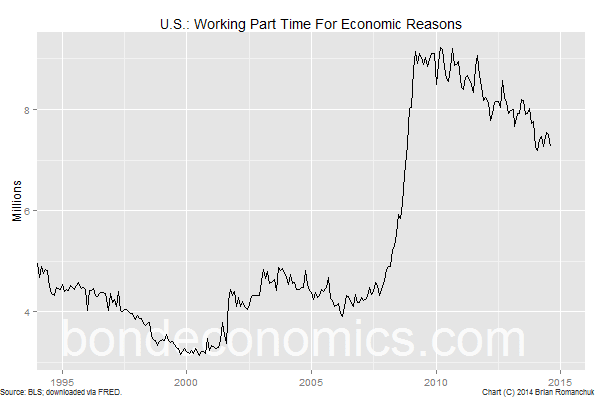 Once again, monetary hawks tend to spray paint happy faces on this switch towards part-time work as being the result of voluntary choices. Although it is partly voluntary, the chart above shows that the amount of workers being forced to work part time is still abnormally high in the United States. 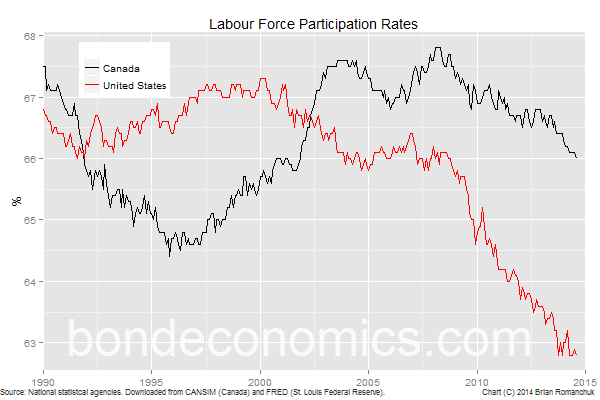 However, unemployment rates are being flattered in both countries by a fall in the Labour Force Participation Rate (chart above). Once the Canadian labour market collapses in response to falling residential construction, it will probably converge down towards the level seen in the United States. But it seems likely that the participation rate in the United States will stabilise near current levels. There wave of workers leaving the labour force is probably finished, as layoffs have tapered (as seen in the falling Jobless Claims figures). The unemployment rate in the United States will likely start to become sticky as a result.

I have noted in previous articles (example) that it would be nice to disaggregate the labour force in order to better capture the two speed labour market. In "Startup CEO (Unwittingly) Explains Biggest Problem in America’s Unemployment Crisis", Wolf Richter notes:


With her credentials as startup CEO, Campbell delineated the prevailing attitude in today’s business world, and simultaneously one of the most harrowing problems for the millions of unemployed job seekers. It’s one of the reasons why the unemployment crisis in America is dragging on: if you don’t already have a job, forget it.

Since employment is growing in aggregate, it is clear that it is an exaggeration to say that you must be employed to find a job, but only slightly. (Additionally, the story is somewhat anecdotal, as job search procedure for a small start up is going to be different than for larger firms.) From an analytical perspective, we cannot dis-aggregate the labour market into sectors where people have a job versus those who do not, as the employment rates will always be 100% and 0% respectively for those "sectors". When we dis-aggregate, we want to have an idea how people are moving between employment and unemployment within the sub-sectors. And what we are seeing is that for "high pressure" sector, workers seem to drop completely out of that employment pool when they become unemployed.

And as the monetary hawks will correctly point out, the implication is that this allows for considerable slack in the labour market to coincide with relatively poor inflation performance. (The aggregate inflation rate is boosted by a relatively tight "high pressure" sector, which cannot be counter-acted by the slack in the "low pressure" sector due to nominal rigidities.) I doubt that this would cause any serious acceleration in inflation - this situation has been in place for years - but the Fed is going to err on the side of too-tight monetary policy. As a result, it may be that forward pricing of the Fed is too complacent.