There has been a run of stronger data in the United States, and there have been some calls for an acceleration of monetary policy tightening. It seems like the timing will be set by the personalities of the policy makers, and my guess is that the middle of 2015 remains a reasonable base line forecast. Higher inflation in Canada has whip-sawed the Bank of Canada, but I doubt that this is too meaningful. 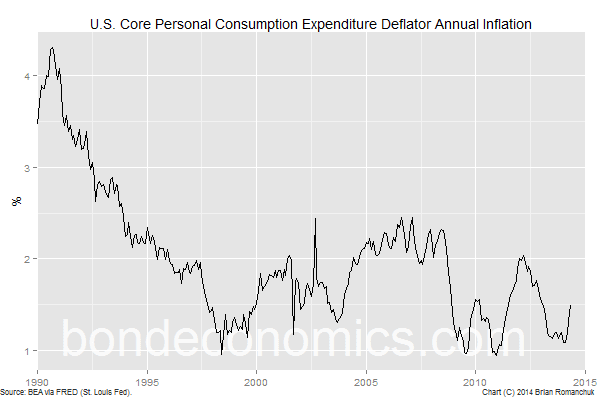 Inflation data for May in the United States and Canada was punchy, which raised some eyebrows amongst the hawks. The core (ex-food and energy) deflator for Personal Consumption Expenditures ("PCE inflation" - above) jumped, but remains below the 2% level that the FOMC wants to see.

If one wants to be melodramatic, one could say that the Fed risks falling behind the (inflation) curve, as it has implicitly committed itself to not hike rates until early 2015 (at the earliest). Meanwhile, the Fed Funds rate is below most estimates of "neutral", and so monetary policy will presumably remain stimulative for a considerable period - e.g., until 2016.

That is not my view, but I can understand why hawkish members of the Fed will be extremely nervous. The problem with assessing whether the Fed is "ahead of" or "behind" the the curve is the difficulty of forecasting inflation in the current low-inflation environment. Although one can use a lot of subsidiary information to get a handle on inflation a few months out, it is difficult to get a handle on longer-range inflation forecasts. 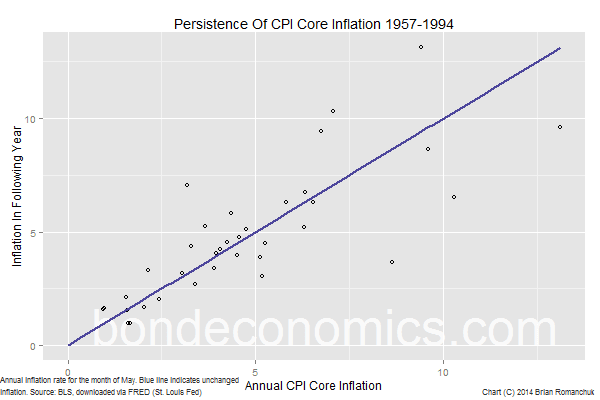 It is easy (in principle) to demonstrate when a good mathematical model for a phenomenon exists - you build the model. However, it is trickier to demonstrate that no good model exists, which is my suspicion is the case for inflation models. It is always possible that a good model is over the next hill crest, we cannot see it yet. But I can show why it will be difficult to find satisfying simple models.

The chart above shows the "persistence" of core Consumer Price Index (CPI) inflation. The x-axis shows the annual inflation rate for a given year, and the y-axis shows the rate for the following year, for the period 1957-1994. (I just used the annual rates for the month of May only, to create non-overlapping intervals.)

The blue line shows the line x=y (it would be 45 degrees if the axes were scaled the same), which corresponds to a prediction that the next year's inflation rate would equal the current year's rate. Although not perfect, the data appears to line up with that simple model. 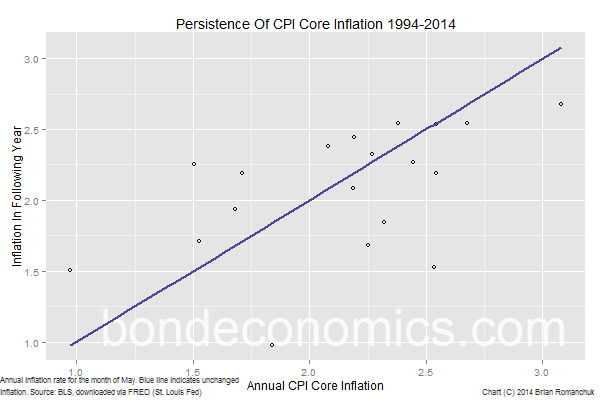 The next chart shows the same analysis for the "low inflation" era post-1994. The data is now more of a cloud, scattered around the (2%,2%) point.

The absolute error generated by the "model" that assumes inflation will not change may not be much different, but the difference is that this error is now a large proportion of the total rate of inflation. In the earlier era, there was a considerable movement in the absolute level of inflation, and so the error was often a smaller portion of total inflation.

The point is this - if we have a model (something like an ordinary least squares regression) based on inputs that are relatively persistent, those inputs will have to have almost no absolute movement in the recent era in order to track inflation. But if we look at things like the unemployment rate, there has been considerable volatility in the post-1994 era. And even if we can find such inputs, the model prediction errors would likely be comparable to the deviations in the level of inflation. Very simply, it has been hard to beat a year-ahead forecast of inflation that is a constant 2%.

The key take away is that the current level of inflation is almost meaningless, and instead we need to look at other variables, notably the labour market. 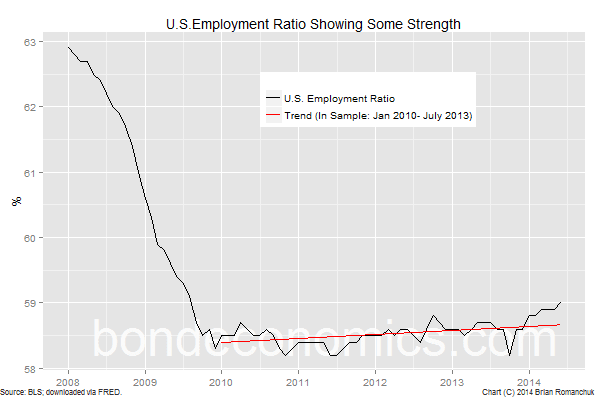 The latest U.S. labour market report was strong (despite the complaints about the full-time/part-time mix). The employment ratio has now hit 59%, and has shown a stronger trend since mid-2013. I am in the camp that views the fall in the Unemployment Rate as being misleading (due to the fall in the Participation Rate due to worker discouragement), but it is clear that not all policymakers agree with my assessment.

If this trend of improvement continues, it seems that the consensus view of rate hikes commencing in mid-2015 seems reasonable. The only real debate will be the pace of rate hikes - will the Fed hike by less than 25 basis points per meeting (for example, pausing periodically)? 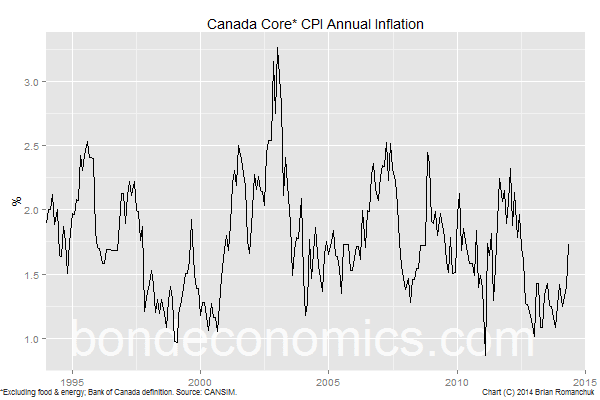 The jump in Canadian inflation, just after the Bank of Canada folded on its previous inflation hawkishness, cannot be too welcome. One could repeat the same analysis I did for the United States, and see that Canadian inflation is also a random walk that reverts to 2% in the post-1994 era. As a result, the central bank should give up on its attempts to attach significance to the latest inflation prints. (Arguably that is awkward for an inflation targeting bank, as it makes the Bank look even less accountable.)

Fed rate hikes would be welcome at the Bank, as that would reduce the tendency of the Canadian dollar to strengthen. The Bank could contemplate gingerly hiking rates, although it will have to keep an eye on the housing market. The fact that the Canadian housing data are largely unreliable is going to make the next rate hike cycle, if and when it occurs, even more exciting.

Perhaps it would have been an idea to expand Statistics Canada's budget to add data to remove the fog around a market that has generated more than $1 trillion in consumer debt...