What is the level of the real neutral rate? This answer to this question is viewed as a critical component of determining the terminal rate for Fed rate hikes, and thus Treasury bond valuation. I respond to some recent commentary of others on this and related questions. 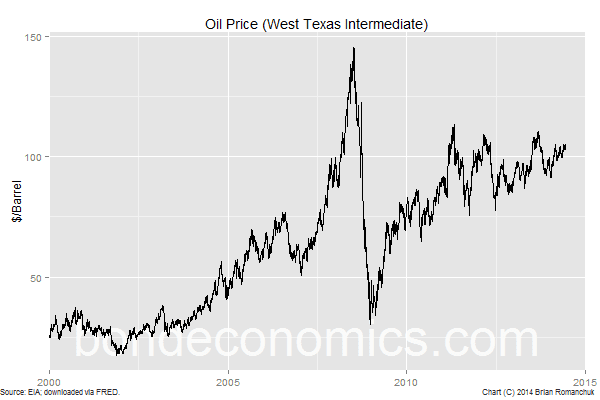 The economic outlook is clouded by uncertainty in the global situation. Conflict in the Middle East and in Eastern Europe raises questions about the stability of energy supplies. Meanwhile, hoarding of commodities in China is being unwound.

The rise in gasoline prices so far will not be enough to tip developed the economy consumer sector into recession. But I do not claim that I have enough insight into global geopolitics to be able to forecast how high energy prices could rise.

Return to Canada in particular, the situation in China is the biggest area of concern, as was noted by the Bank of Canada. High energy prices alone have a somewhat mixed impact on the economy. Energy producing regions, mainly in the west of Canada, benefit from high energy prices, even though Canadian consumers lose purchasing power.

The rally this year in bond yields acts as a reminder that tail risks are skewed towards lower yields, relative to a baseline forecast of the Fed starting to hike rates around mid-2015. There is no sign of inflationary pressure (outside of the commodity complex) that would cause a faster normalization of rates when compared to that baseline forecast. Conversely, a recession could always occur, causing the path of the policy rate to remain far below what is discounted by the forwards.

What Is The Real Rate?


Paul A. McCulley has returned to PIMCO, and has just published his first article since his return, "Just Give Me a Framework". My viewpoint is often similar to his, which is probably explained by both of us often referring to the analysis framework of the economist Hyman Minsky.

To my mind, part of this apparent movement in the neutral rate is the limited sensitivity of the overall economy to interest rates. For example, even if the policy rate was 3% right now, I doubt that the economy would look much different. (I have an embedded assumption that the curve would flatten if the policy rate were higher, and so term interest rates, such as mortgages, would rise by less than 300 basis points.) Since nominal interest rates will still be far below return targets of institutional investors and hurdle rates for corporations, the risk-seeking behavior we are seeing now would probably continue. Increased interest income received by the household sector would compensate for any weakness in housing. 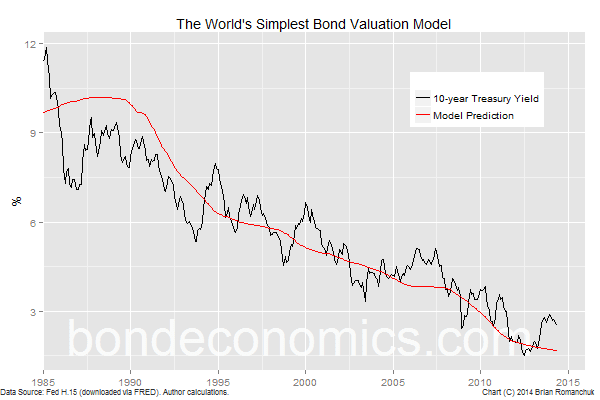 As a result, if and when interest rates rise, it seems reasonable to expect that they will peak between 3–4%. Of course, some component of the private sector will blow itself up sooner or later, triggering a recession. And the Fed will once again panic and slash the policy rate to 0%. Looking across the cycle, we will see that the nominal policy rate will average about 2%, which is where my World's Simplest Bond Model puts the 10-year Treasury yield (described here). Since core inflation is stable around 2%, the average real policy rate is near zero.

Although I am somewhat skeptical about the concept of a neutral rate, if one attempted to measure it using some econometric technique using recent data, it seems likely that the estimated value for the real rate will be zero. This is because the estimate should be close to the average across the cycle. Therefore I do not see the 0% "New Neutral" real rate view of PIMCO as being particularly radical.

Paul McCulley also argues that the bull market in financial assets reflects a movement towards an "equilibrium" real rate of return closer to 0%. The general desperation of investors for decent returns does seem to justify current risk asset valuations, even if we ignore what monetary policy trends.

Was The Fed "Too Methodical"?


I want to close with a response to some comments made by James Bullard, President of the St. Louis Fed. His comments to a banking group in Florida last week were reported by Reuters as follows.

"I think the '04-06 cycle was too methodical and did not react sufficiently to economic developments," Bullard said, explaining that the pace of hikes seemed too set on a calendar schedule...
Bullard added that the ideal strategy for future Fed rate increases is one that is not disruptive like the tightening in 1994, and one that is more reactive to economic conditions than in 2004-06.


I think his interpretation of the last tightening cycle ascribes it too great an ability to fine tune economic outcomes to monetary policy. Hoping for a Goldilocks "just right" tightening, between the too disruptive 1994 cycle, and an allegedly not disruptive enough cycle in 2004 – 2006, seems like wishful thinking. The Fed reacted to the overall economy, and it is not clear that it was particularly late to tighten, as growth was almost as sluggish as this cycle. The housing bubble was not going to be contained with interest rate policy, regulators needed to ensure that credit standards were maintained. People just moved to more dubious mortgage terms to sidestep the cost of higher interest payments. The housing bubble was only going to collapse when lenders were no longer willing to give money to people who lack the capacity to pay them back.

This is not just a point of historical interest, the same scenario is now playing out in Canada. Will the exuberance in the housing market be contained by credit tightening, or will it require interest rate hikes to crush speculation?

Believing that the Fed should hikes rates rapidly and in a somewhat random fashion, as they did in the 1994 cycle, is not coherent with the other beliefs of central bankers. Central bankers generally believe that interest rates are a relatively powerful means to steer the economy, using the lever of changing expectations in the private sector. If the central bank can just set rates at random and not have any ill effects, why do central banks need large research staffs? They could just code a random number generator and crank out a new policy setting every six weeks.

Some people believe that "gradualist" Fed policy is doing things like suppressing the VIX (a measure of implied equity volatility). This complaint makes little sense to me. The only market that should be sensitive to Fed policy is the Treasury market. Since early 2013, Treasury market volatility has been much higher than was justified by economic fundamentals. But this was not enough to seriously move the equity market, which is hardly surprising. Embedded growth expectations and the equity risk premium are much more important to equity valuations than the risk-free rate. The Fed should not be expected to blow up the economy in order to make equity investors act sensibly.