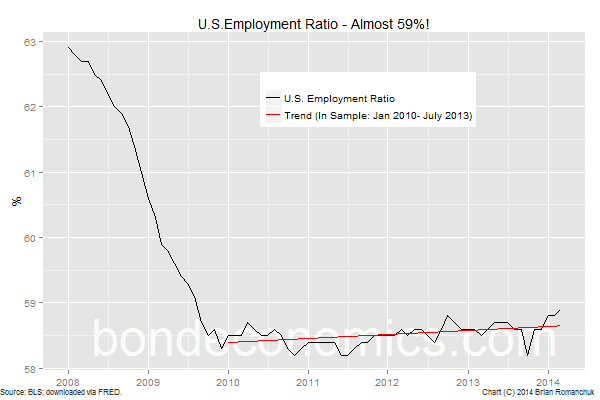 The data for March 2014 for the Household Survey component of the U.S. Employment Situation Report were good; the employment/population ratio rose by 0.1% to 58.9%, which means that a whopping 476 thousand jobs were created on that measure. The unemployment rate was static at 6.7%, courtesy of a rise in the participation rate by 0.2%. On the whole, this gives evidence that steady growth continues. 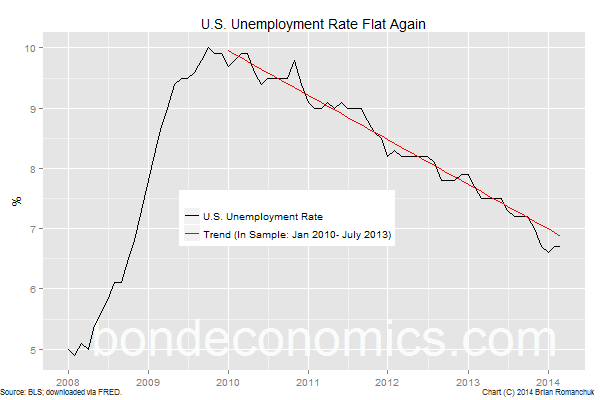 The rise in the Participation Rate has slowed the descent of the unemployment rate, which had previously slashed below the cycle's trend line in late 2013. I do not see this as surprising; as the unemployment rate drops, there are less long-term unemployed that can quit the labour market. And since jobs are being created, albeit at a slow pace, those who have quit the labour market will drift back into it. At 63.2%, the participation rate is almost unchanged from last March's level (63.3%). It is going to be correspondingly more difficult for the unemployment rate to fall in the absence of a meaningful acceleration of job creation.

The Nonfarm Payrolls (NFP) number was slightly below the pre-release consensus. Given that the standard error around the +192 thousand estimate for NFP covers almost the entire range of pre-release economist estimates, they all can claim to have been correct.

Afternoon Update: One of the side effects of looking at the economy in a different way is that I have a different read on the data than the markets. The market had a decent rally in response to this release (7 bps at the 10-year point), whereas my reading is that the data are mildly bond-bearish. My guess is that market participants attributed the weakness in previous months to the weather, and so the implied market consensus was for a March NFP print over 270k. I would have only survived about three days as a market maker.