Japanese Business Cycle Not Yet Dead 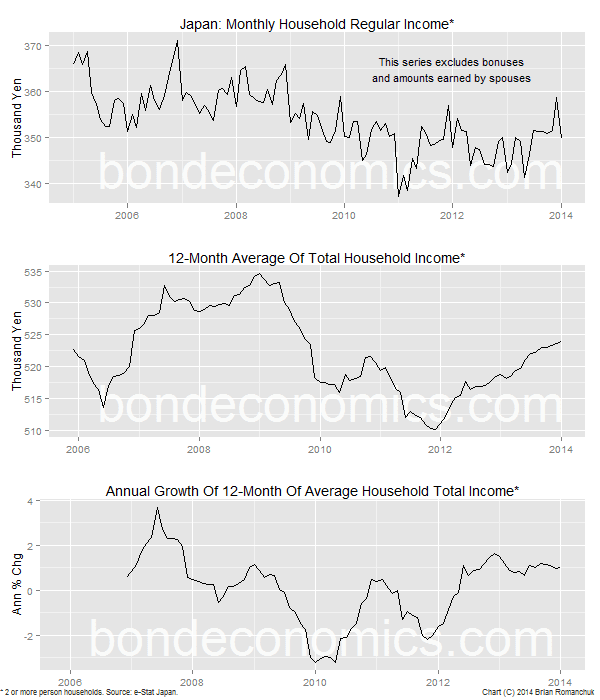 The Japanese business cycle is still alive. But a prudent analyst might consider checking its pulse fairly frequently. The economy lacks upward momentum, and it now has to absorb the sales tax increase.

This article at Across The Curve offers a quick summary of the latest run of weak Japanese data. The Tankan showed some improvement, but the details were more pessimistic. Industrial output and consumer spending fell in February.

The wage data for January were showing little sign of upward pressure (chart at top of article), despite the alleged focus on raising wages within the “Abenomics” programme. The base salary data is stuck at the same level as 2010. The 12-month moving average of overall wages, which also includes bonuses and spousal income, is tracking along at a 1% year-on-year growth. (Note that there are large bonus payments that are paid at mid-year and December, which creates spikes in the monthly total income series. The only way to get a growth rate is by heavily smoothing the series, since it does not look like the data will behave well under seasonal adjustment.)

The CPI has been drifting upwards. Given soft wage growth, rising consumer prices are just eating into disposable income, dropping sales volumes. Geopolitics poses risks for energy prices, which is a large unknown for the economy. But with the yen stuck in trench warfare between the 100-105 levels, currency weakness will stop being a factor for non-energy import prices. The other news on the CPI front is that the sales tax rise will create a one-time price level shock in the Consumer Price Index. But the only people who will worry about the inflationary effects of that shock are the JGB perma-bears.

Finally, the Abe administration has seized upon the idea of front-loading spending this fiscal year (which started April 1st, which is already yesterday for my readers on the other side of the International Date Line). The objective is to create an upward bump to spending over the next few months, and which is supposed to cancel out the effect of the sales tax increase.

This frankly smacks of desperation; I cannot remember any recent attempt to micro-manage GDP growth on a quarterly basis by using fiscal policy. Maybe some policy makers attempted to do so in the heyday of stop-go fiscal policies, but they stopped using stop-go policies for good reason. Anyone in the private sector who deals with the Japanese government knows that any surge of spending is going to painfully reverse in a few months, and so they unlikely to change their behaviour to any extent. The only explanation I can think of for this somewhat unusual policy is that the authorities want an upward spike in GDP to coincide with the hike of the sales tax, so that they will be able to pretend that any recession that hits in the near-run was not policy-induced.