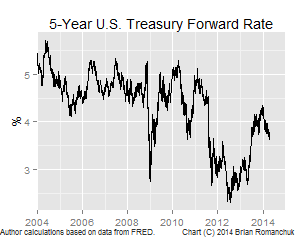 In this article, I look at the paper "Official Demand for U.S. Debt: Implications for U.S. Real Interest Rates" by Iryna Kaminska and Gabriele Zinna (of the IMF, but the paper does not represent the official views of the IMF). Their conclusion was that Fed purchases of Treasurys (Quantitative Easing, or "QE") lowered 10-year real rates by 140 basis points. I explain why I question their methodology.


The paper, like most papers coming out of academia and/or official bodies, is full of a lot of complicated mathematics. Interested readers can look at the full mathematical treatment within the paper. Since I have doubts about their methodology, it is not worthwhile looking at the details of their mathematics.

They used the stock of debt holdings (as a percentage of outstanding) as well as the average maturity of Fed holdings as measures of the demand pressures. This means that they are using the stock of holdings, and not the flow of holdings as being the operative factor. The implication is that the "demand pressure" is still rising as QE is continuing, even though the flow of purchases is decreasing. 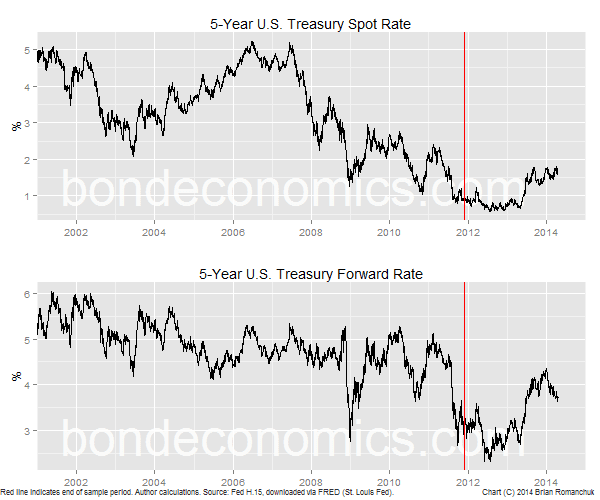 Side Issue: What is The Time Period We Are Talking About?

Since the data used in the analysis ends in November 2011, I should technically be talking about what was happening then, since that is the point at which their estimate for an effect of 140 basis points was made. And looking at the chart above, yields were particularly low at that point in time. But the problem is that since the Fed has kept purchasing Treasurys, the effect should be even larger in 2014. And I discuss below, that appears implausible.


The first problem with the paper is that it is specified in terms of real rates. Although real rates are assumed to be important in mainstream economic models, they have no financial significance. There is no fundamental pricing relationship for real rates. Inflation-linked bonds are priced off of two variables:

Nominal interest rates are set in the deepest market on the planet, and those nominal rates are priced off of the expected path of interest rates (and some form of a term premium). Breakeven inflation (at the front of the curve at least), is tied to realised inflation by market participants running breakeven trades against their inflation forecasts. At the long end of the curve, nobody is really in a position to hold trades to maturity, so some rules of thumb have to be used in pricing. Real rates are the spread between these two sets of expectations; they have no independent existence.

The central bank has no choice but to set a nominal interest rate. The fact that we are stuck at the zero bound has an important effect on yield curve behaviour. Since we have only been at the zero bound for a short period, there is no precedent for this effect in the historical data. Thus a technique that ignores the zero bound would not run into this effect until now. The authors are attributing the breakdown in their methodology to Fed purchases, whereas the real culprit is probably the zero bound.


The authors looked the maturity of Fed holdings, and they ignore the fact that the Treasury "termed out" their debt over this period. A properly specified model of supply and demand would have to recognise this effect. But this ignored, as they want to attribute the breakdown in their real rate methodology to Fed purchases.

The last time the Fed attempted to influence the economy by changing the maturity structure of their holdings was "Operation Twist" in the 1960s. It did not work then, and the accepted excuse for its failure was that the Treasury did not coordinate with the Fed - it lengthened the maturity of issuance. In other words, exactly what is happening now.

(NOTE TO ACADEMICS: It will soon become clear that QE has failed to accomplish anything. This casts doubt on the loanable funds framework. But you will be able publish articles that take into account Treasury issuance patterns, and use this to "explain" the failure of QE.)


The term structure for the TIPS curve up to the 10-year point is wildly unstable, even if nominal rates are away from zero. This is because the modern U.S. economy only appears to be sensitive to core inflation, not headline. (This may not have been true in the 1970s, as a result of widespread indexation. But that effect has died out before the data set of the paper starts.)

A rise in headline inflation due to higher gasoline prices acts as a tax on the U.S. economy. Economists who predicted rate hikes in 2008 because of the oil price spike were incorrect, which was obvious even in real time. The Fed "looks through" such spikes.

There are also other technical factors that hit the real yield curve. The crisis in 2008 also blew up index-linked bond curves. Breakeven trades are balance sheet intensive, and many investors were forced out of positions during the deleveraging process. This dislocated the real yield curve.

Problem: There Is A Term Structure For Term Premia


The estimate of 140 basis point premium for a 10-year bond appears implausible. The reason is that there is a term structure to term premia. The front of the curve is more easily traded versus expected short rates, and so term premia there are small. For example, a 2-year bond yield probably only includes a term premium of about 25 basis points.

Note that within this section, I discuss the nominal yield curve, since it is better behaved than the real yield curve.

We can approximate the 10-year yield as:

Such an estimate for a fair value for the forward rate seems far too aggressive. Realised term premia have been high over recent decades, but I would argue that this reflects bad yield forecasts by market participants. For example, almost no economists expected short rates would be stuck at 0% for years. The consensus spent a great deal of time trying to explain the "conundrum" of "too low" Treasury yields in the mid-2000s, even though those yield were much higher than the subsequent path of realised short rates.

Since the term premium is unobservable, it will be hard to find consensus on this point. However, an extremely high term premium is hard to reconcile with the depressed levels of other risk premia in other markets, such as credit spreads.

One possible way of defending the paper's results is to argue that Fed Treasury purchases raised inflation expectations while at the same time lowering real rates so that there is was limited net impact on nominal interest rates. This would allow real rates to be depressed, as they argue, while at the same time leaving nominal risk premia at reasonable levels. Such an assertion looks unprovable to me, and I would have to address it in another article given the added complexity of the argument.


Although Fed purchases of Treasurys presumably lowered their yields somewhat, I doubt that the effect is measurable. Yields oscillate wildly in response to expectations shifts, and those expectations cannot be observed directly. Probably the only sensible methodology for investors is to largely ignore term premia, and decide whether rate expectations embedded in bond yields look reasonable relative to their yield forecasts.