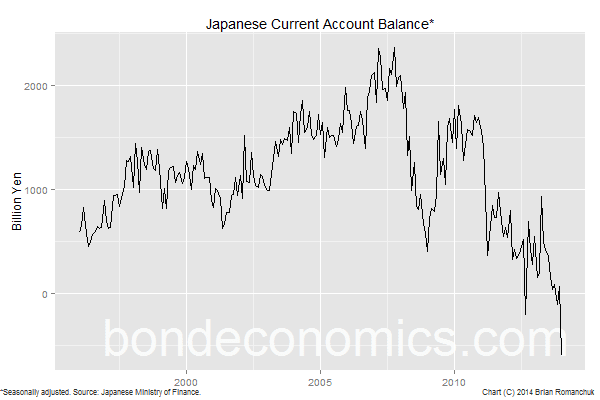 Japanese data released yesterday were dismal, with fourth quarter GDP below expectations, and the current account deficit hitting a record.

To put it bluntly, there's not a whole lot of momentum behind Abenomics at this point, and we have not yet seen the impact of the consumer tax hike. The external sector is not helping out growth, although the figures are unusually bad as a result of the nuclear reactor shutdown.

Although the chart of the current account deficit above looks horrible, the number has to be kept in perspective. The seasonally adjusted deficit in January was about one-half trillion yen, or around $5 billion US. (The non-seasonally adjusted figure was bigger, at about 1.5 trillion yen.) However, the Japanese held 661 trillion yen of foreign assets at the end of 2012 (Ministry of Finance International Investment data  link). The flow that is the current account deficit is completely dwarfed by the impulses generated by the portfolio preferences of Japanese investors.

However, it is interesting that Moody's is attempting to hop on the bandwagon about worrying about the Japanese external position, as was noted in this Bloomberg article.


Prolonged deterioration in Japan’s current-account balance would erode the nation’s position as a net creditor, one of its main credit strengths, Moody’s Investors Service said last month in a report.

I guess since that whole debt-to-GDP ratio thing didn't work out, they have to come up with some other reason to worry about JGB's. But it does not look like the JGB market is particularly concerned. 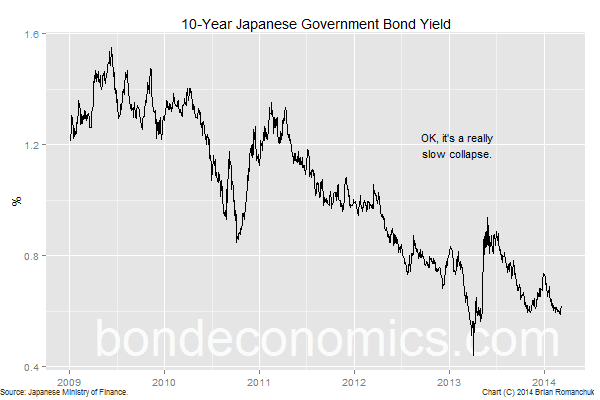 Data have been dismal as well outside of Japan. Although people may dismiss the latest number as the result of the weather, rising auto inventories could be the Achilles Heel of the United States economy. I do not know enough about the Chinese economy to draw any confident conclusions, but the chatter around the copper market and their shadow banking system bears watching. Even if China itself can avoid a hit to its domestic economy by taking countermeasures, commodity producers could be collateral damage if there is some rebalancing in that economy.