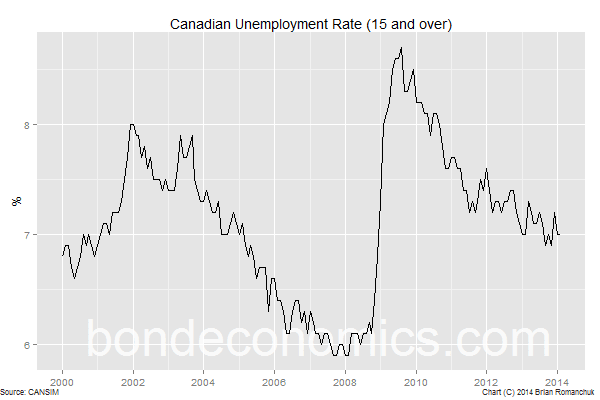 This week had two developments on the Canadian policy making front: Finance Minister Flaherty resigned, and Bank of Governor Poloz gave a speech effectively throwing in the towel on the Bank's tightening bias.

I do not know what exactly prompted the resignation of the Finance Minister, but I will note that the timing was impeccable. His fiscal policy tightening has locked Canada into a low growth path that is unable to reduce the unemployment rate. Now that the government is projecting a surplus, he can declare victory and go back to the private sector. When the Federal Government deficit explodes in response to the next recession, he will be able to write editorials saying that everything was fine when he was in charge.

Governor Poloz is still stuck in his job, and he still has to deal with the consequences of Canada's too-tight fiscal policy. The unemployment rate is stuck at 7%, inflation is below target and too many condos are still being built. Even though the economy is limping along and avoiding recession, excess capacity is not being removed. With the policy rate at 1%, the monetary policy focussed consensus will panic - the central bank will have no "spare powder".