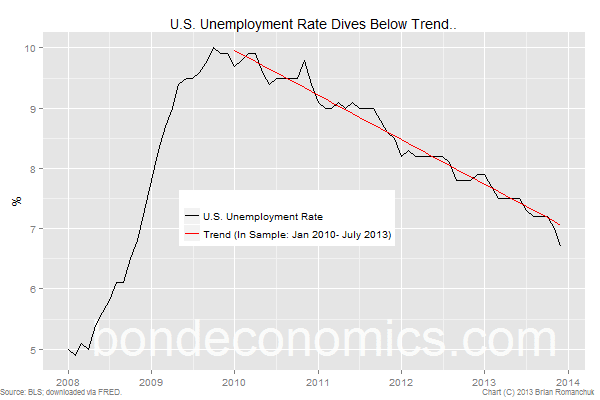 The December U.S. Employment Situation has data that prove both the hawks and doves correct...

As seen above. the Unemployment Rate has made a slashing move below my highly sophisticated straight line projection. Inflation hawks will be able to look at this and say "I told you so - policy is too easy, and we will run out of spare capacity in the labour market before the curve is pricing Fed rate hikes." Conversely, doves will be able to point to the unchanged Employment Ratio (below) to say that the economy is only able to generate jobs at a pace to keep up with population growth, and so we are not getting any closer to closing the output gap. 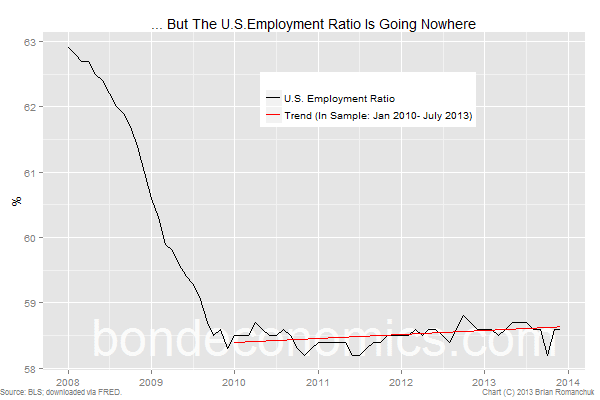 The Nonfarm Payrolls (NFP) number (Establishment Survey) was weaker-than-expected, but this may be due to weather. (I read somewhere that the Unemployment Rate also was lower due to weather, but I could not see a reference to that on the BLS site.) As I write every month, I dislike the NFP number due to the false precision it projects, and that the measurement errors are systematic. The Household Survey has a smaller sample (which is what the above charts are based on), but at least its errors appear to be random.

Sooner or later, I will have to write something in depth on the Participation Rate. (I have not done so as I expected it to stabilise, and so one trend line or the other would break.) I am in the dovish camp on the interpretation of the past data - the historical fall in the Unemployment Rate has been somewhat artificial (if there's no jobs, people stop looking for work).

But that does not mean that the doves have to be correct going forward (which is what matters for markets) - in an expansion, it is reasonable to expect job growth to accelerate. And although there are reasons to be cautious, it seems to me that the default forecast is that the economic expansion will continue (e.g., we are not heading into a recession in the coming months).