Rising Auto Inventories Are A Risk 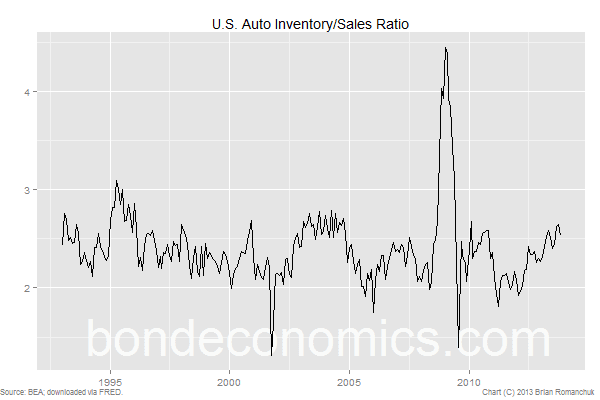 Wolf Richter published an interesting article recently: The Next Tire To Drop On The US Economy. In it, he discusses ominous indicators for the future of U.S. auto production...

The devastating crisis in the industry was caused by years of overcapacity, overproduction, steep rebates, hollowed-out balance sheets, bloated inventories, and a host of other problems that suddenly came in contact with crashing sales. This experience taught the industry to not ever lose sight of that vaunted “discipline.” The industry would never again be blinded by exuberance. But that lesson has already been forgotten.

My default forecast for the U.S. economy in 2014 is fairly bland - continued growth, probably slightly faster than was the case for 2013. But that is not saying much - growth slowed to a crawl last year. Less fiscal drag should allow growth to recover.

The main risk to this baseline forecast is the possibility of a recession. (I think the automatic stabilisers will prevent the economy from overheating for a considerable time, removing the other tail to the risk distribution.) The Auto sector appears to me the highest profile potential trigger for recession, as an inventory correction will have a significant impact.

The chart at the top of this article shows the U.S. Auto Inventory/Sales ratio, from the Bureau of Economic Analysis. The latest figure is for November, where the ratio stood at 2.53. Since this figure is based on monthly sales, the interpretation of that ratio is that it means that ratios represent 2.53 months of current sales.

Please note that I do not know whether that inventory figure includes auto dealer inventory (the numbers quoted in the Richter article imply higher figures, but I do not have the data he refers to). Since auto dealers are independent of the manufacturers, autos are considered sold by the manufacturers once they are purchased by a dealer, not a final customer.

Keeping that data uncertainty in mind, the BEA inventory/sales ratio does not yet seem to constitute grounds for immediate panic. It is relatively high (ignoring the spike that occurred during the financial crisis), but it had been at these levels before (such as during 2003-2004). However, production may need to be throttled back at some point to keep this ratio from rising any higher. If there are other negative factors that hit the economy at the same time, recession could easily result.

I have just started to write for the public domain, and I do not want to commence with a blown recession call. Therefore, I do not have a formal forecast about a recession, either pro or con. However, it seems safe to say that autos represent a significant tail risk to the U.S. economy, and the sector needs to be watched carefully. (The other significant source of tail risk that I see originates in the Emerging Markets. I do not follow those economies enough to know whether the current turmoil is just the usual volatility we have come to expect, or the beginning of a more ominous trend.)

Email ThisBlogThis!Share to TwitterShare to FacebookShare to Pinterest
Labels: Stuff I Read On The Internet, US