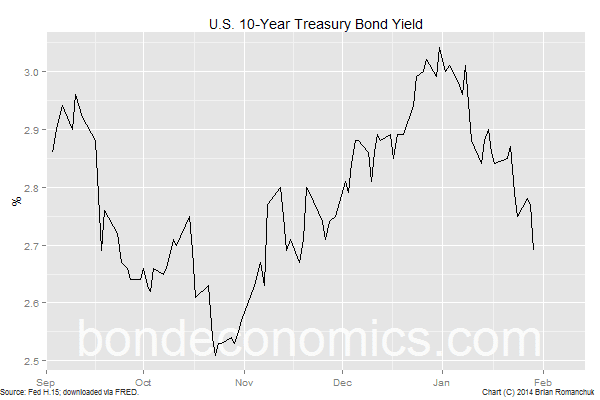 U.S. Treasury yields have charged back and are now closing in on the bottom end of their recent trading range. Although recent Emerging Market jitters may be helping push yields lower, this also could just be the usual to-and-fro between the bulls and the bears.

The Fed continuation of the Taper was the complete non-event most Fed watchers (and I) expected, although the risk markets seemed to react for some reason or another. I am not too concerned about the parsing of the Fed statement; they are on autopilot until early 2015 unless something hits the economy really hard. They will have about another dozen Employment Reports to look at before they have to make a substantive decision. Therefore, they are not going to commit themselves to anything.

My casual read of the curve is that the markets are roughly pricing a rate hike cycle some time in 2015, which is consistent with the published consensus of Fed policymakers. The trading range we are in is the inevitable recalibration of market pricing of an event that is at least 12 months in the future.

However, the question remains whether there is something more to it. Warren Mosler recently posted a good rundown of some of the U.S. economic statistics, which are certainly looking soft. The economy does not appear to be accelerating; it is an error to say we are in the "recovery" part of the cycle. What we are seeing is peak growth, and that peak growth rate is not very fast. However, the U.S.  economy may be able to keep rolling along at this sedate pace for some time.

But given the various problems that have arisen in a number of Emerging Market countries, is there a risk that "contagion" will hit growth?

If "growth" refers to global growth, it is highly possible. However, as someone who worked as a developed market fixed income analyst, the concept of global growth was never very important to me. (Equity analysts will disagree; global growth matters for multinational corporations.) Central Banks in floating rate regimes, including the Fed, set rates based on domestic conditions. (I have seen some recent chatter by emerging market policymakers that have been shocked by this domestic focus of the Fed. Apparently, the Fed is supposed to take into account other countries because of the U.S. dollar's "reserve currency status". The problem is that if you believe in fantastical concepts like reserve currency status, you end up being mugged by reality a lot.)

A slowdown in the developed markets would probably hit various commodities, as they have been snapping up resources for consumption and investment drives. This would hit some sectors, and possibly some developed market commodity exporters, like Canada and Australia. But even in the case of Canada, only a handful of people work directly in the resource extraction industries. The bulk of the population live in the main cities, and are commodity consumers. The benefits to them of falling commodity prices, particularly oil prices, may outweigh the pain of the oil patch.

I use the 1997 Asian Crisis as my analogy. At that time, a number of Asian countries managed to blow their economies up quite nicely, and then the IMF came along to make their problems worse. Later on, problems spread to other countries in 1998 (just when I started in finance). However, a side effect was that oil prices crashed. 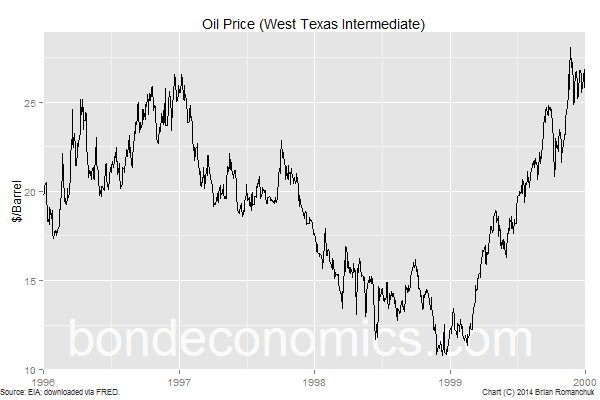 West Texas Intermediate prices fell from $25/barrel to just over $10 by the end of the crisis period. Additionally, Asian exporters slashed prices in order to stay afloat.  Falling import prices provided a boost for American and other developed market consumers, and the real economy continued to boom (despite various financial market panics). In theory, falling import prices would be bad for corporations competing with those imports, but the reality is that any corporation that was competing with Asia on a price basis was out of business a long time ago.

For this reason I would not assume that Emerging Market weakness will translate into economic weakness amongst the developed economies (outside of the Euro area, which is struggling under its self-inflicted wounds).