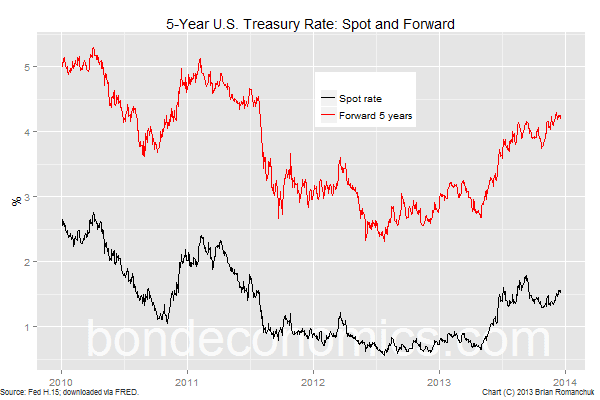 Just a quick comment on what is priced into the U.S. yield curve.

The markets are fairly illiquid and unsettled, so we will really only have a good look at how the bond market will cope with the Fed in January. However, the markets have settled in to price a rate hike cycle that will finish with rates somewhere near 4%. This is seen in the chart above, where the 5-year bond yield, 5-years forward, is just over 4%. (Note that my calculation of the forward is an approximation.) One could argue that there should be more of a term premium embedded in the forward rate, which is why the "true" market pricing for the terminal rate is somewhat below 4%.

The key for the market action is the timing of the first rate hike. The end of Quantitative Easing will be at the end of 2014, if the Fed continues to "taper" by $10 billion a month. (We will find out at the next meeting whether the Fed will follow that rhythm; I guess that they will do so.) This means that early 2015, or possibly the fourth quarter of 2014 is the earliest time for rate hikes. The Fed is trying to make you believe that the first rate hike will be later than that; however, they are not the ones who will lose money (and/or their jobs) if they do in fact hike rates earlier. (If the Fed wanted to make forward guidance more credible, they could offer to resign if their guidance is wrong.)

But if the Fed is correct that the hike can be delayed past mid-2015, there is a chance that the tightening path is already priced into the curve. In that case, it would mean that a good portion of the bond bear market is already behind us. Meanwhile, reaching a terminal rate of 4% will take about 3 years from now (e.g., end of 2016), assuming the Fed follows its usual practice of hiking by 25 basis points a meeting. That raises the risk that the business cycle will die of old age before the terminal rate is reached.

An alternative way to view this is to look at the slope between the 10-year yield and Fed Funds (chart below). 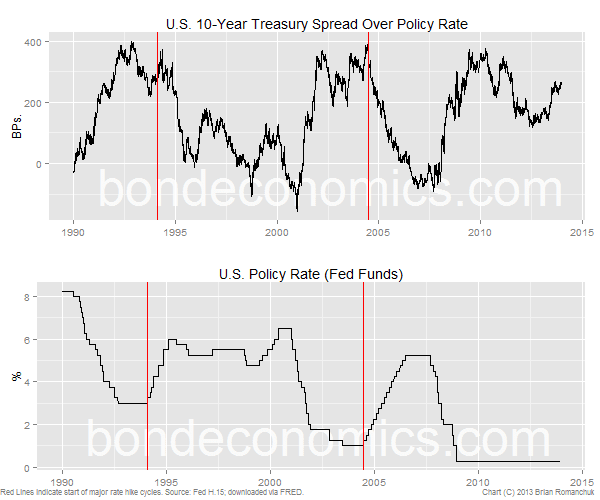 The current slope of the 10-year yield is relatively high, being close to 300 basis points. Since 1990, the maximum slope was typically near 400 basis points. Most of the episodes of the slope hitting 400 basis points were overshoots at the end of rate cut cycles; markets incorrectly forecast rapid returns from what were seen as "unsustainably low" levels.  However, the slope was near 400 basis points at the start of the rate hike cycle in 2004. This appears to put an upper bound on the 10-year yield for when the next rate hike cycle starts. And that is probably a fairly conservative (high) upper bound; in 2004, the housing bubble was still inflating rapidly. The current economic cycle is far more subdued (outside the risk asset markets).