The 2-day December FOMC meeting is underway, and the markets await the announcement Wednesday. Today’s CPI results did not add much in the way of new information. My fearless Fed forecast is that the result will be a policy error.

In “FOMC Meeting Something of a Nailbiter”, Tim Duy does a good job of covering the analysis of the logic behind the Fed’s decision. His view is that it could go either way. Since I largely agree with him, I will keep my Fed-watching comments here fairly short.

I see the Fed as having 3 realistic options:


All three possibilities will likely be viewed in the future as a policy error. Unfortunately, the Fed has backed itself into a corner and all of its options stink. Future generations will look at the chart below, and ask itself, “What was the FOMC thinking?” All I can think of was that this was the FOMC’s attempt to kill the Quantity Theory of Money once and for all. 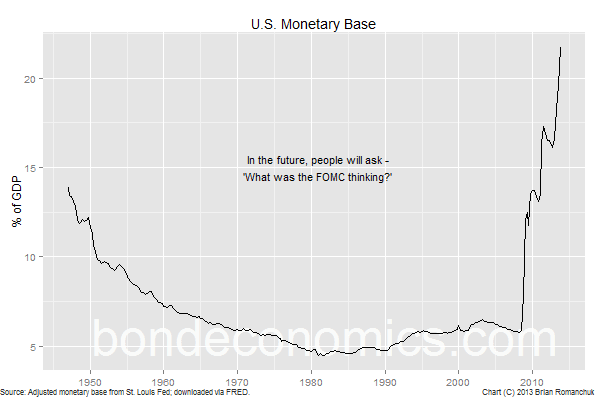 Any tapering of purchases risks roiling the bond markets in thin December trading, which will probably hit other markets as a result of contagion. On the other hand, doing the deed in January could be just as bad – all the bond bears will be out in force with fresh bullish annual economic forecasts. (When I squint at the chart below, there seems to have been some seasonal Treasury sell offs at the beginning of the year, but it is not too conclusive.) 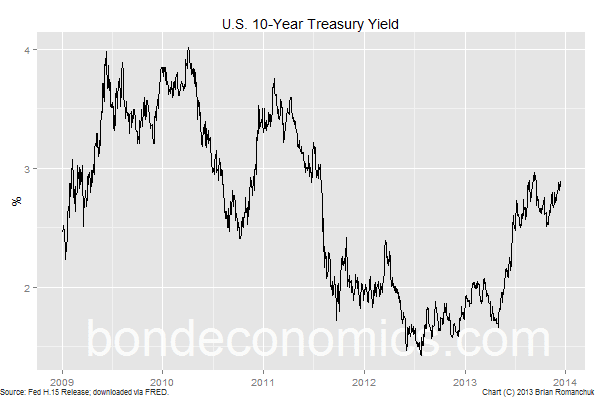 Meanwhile, by delaying yet another meeting, the Fed will appear even further behind the Unemployment Rate curve. And by delaying tapering too long, the Fed may have killed the viability of forward guidance. If the end of bond purchases is too close to the expected liftoff date for Fed Funds, the reasonable expectation will be that the end of Quantitative Easing (QE) is the beginning of the rate hike cycle.

The “tiny taper” (by $5 billion per month) seems like the least bad option to me.  If speculators have been putting on stupid trading positions as the result of central bank policy, shaking them up every so often seems like good policy.  And the illiquidity of the holiday period also means that nothing much is going on. Who cares if rates back up during a period when no one is borrowing? If the markets overreact, the Fed can point out that it will take another 16 reductions of $5 billion to end purchases completely.

Another advantage of starting tapering is that it might begin to kill the stories about the Fed causing bubbles. (See this Bloomberg article, and this one by Yves Smith as examples.) I am unconvinced that QE has even caused measurable overvaluation within the Treasury market, never mind other asset classes. Treasury yields are above the value predicted by the World’s Simplest Bond Model; this reflects the fact that realised short rates have averaged out at a low level for a long time. Given the sluggishness of growth and the low level of inflation, it would be hard to criticise Fed policy as being too loose from anything resembling a mainstream economics point of view. (On the contrary, Austrian economists think any pegged interest rate is incorrect.)

It was politically tone deaf for the Fed to talk about using the “wealth effect” of the stock market as a tool of policy. They now have both ends of the political spectrum arguing that the Fed is manipulating the stock market for nefarious ends. Additionally, people now using the Fed to explain equity market movements. Yves Smith writes –


No investor can afford to admit to their clients that the Fed is dictating their strategy. They all have spiels generally of the form of how they do serious analysis of some sort to come up with their particular picks. They therefore need to craft a description of current conditions that makes them being long make sense given how they profess to invest.


Although the sentiment appeals to my cynical world view, I have my doubts about this. Short-term noise in the markets may very well follow news around the Fed. But that only reflects the fact that equity fundamentals are so slow-moving that the short-term market action will blow with the latest fashion. As for the longer-term trends, equities and other risk assets are the only way asset allocators could hit their return targets. Government bonds at any yield below 4% are not serious contenders for them. As a result, I argue that bond yields now have limited impact on equities; instead equities are following their normal pattern of behaviour since the 1960’s (which is not pretty, as I describe here).

Finally, the “bubbles” does not appear too dangerous for the real economy. As I have seen other commentators note, there has not been an investment boom associated with the current “bubble”. This limits the possible impact of the exuberance of risk asset markets. IPO’s and other financial activities are exciting, but only represent a reshuffling of paper claims amongst the various participants. They only directly add to GDP via the bankers' fees. Financial market shenanigans that do not lead to poor investment or borrowing decisions in the real economy do not have a big enough footprint to overcome the automatic stabilisers.