Why China Should Become A Corporate Bond Dealer

In this latest "Stuff I Read On The Internet" entry, I look at two complementary posts on supply and demand issues in the bond market.

The win-win solution is obvious: the Chinese government should become a market maker in corporate bonds. They can easily ramp up their corporates inventory, and they can diversify their USD exposure away from Treasurys.


I agree with Paul Krugman's analysis. We could imagine a scenario where the Chinese leadership started reading some other blogs and decided that they could become the dominant geopolitical power by dumping their Treasury holdings in one day. What would happen? Obviously, they would be selling at a big discount, and the only way the market would clear is if the Fed stepped in and bought what they sold. What would be the result once all the trades clear? The Treasury holdings would just move from Chinese accounts to the Fed, and the Chinese will have lost a lot of  money. They additionally would have a lot of USD deposits that they have to do something with.

Once the dust settles, the Chinese would be poorer, and Treasury yields might ultimately end up lower, since securities were moved to entity that does not have to sell. The Chinese could drive down the value of the U.S. dollar, but that is incoherent with their previous currency interventions, which were driving USD higher. As a result, I do not see how this particular scenario fits China's geopolitical interests. 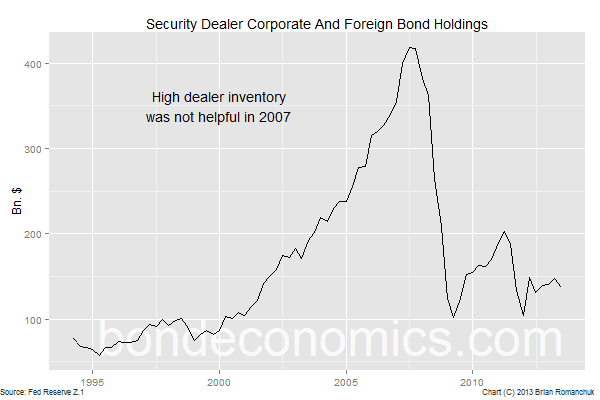 I assume that lower inventory levels have widened bid-offer spreads. The dealers have profit targets to meet, and so they need to make up lost carry income with more income off transactions. This matters if you are actively trading corporate securities. However, the inventory situation may make make a potential crash less dangerous.

The corporate bond market typically seizes up when there is something fundamentally wrong, such as some big defaults. Investor reallocations may cause problems, but the result is usually just a temporary blip in pricing. During the latest financial crisis, corporate spreads blew out but the sell side was not very active in bidding on corporate bonds. Why? One reason is that they were stuck with too much inventory themselves going into the smash-up (as shown in the chart above).

The best way to prevent a crisis is to have buying capacity sitting on the sidelines. We cannot conclude from the observed dealer inventory numbers that risk capacity has been taken away permanently; it may be that the sell side has learned something from past experience and lightened up positions  in response to tighter spreads.

Email ThisBlogThis!Share to TwitterShare to FacebookShare to Pinterest
Labels: Corporates, MMT, Stuff I Read On The Internet, Supply/Demand